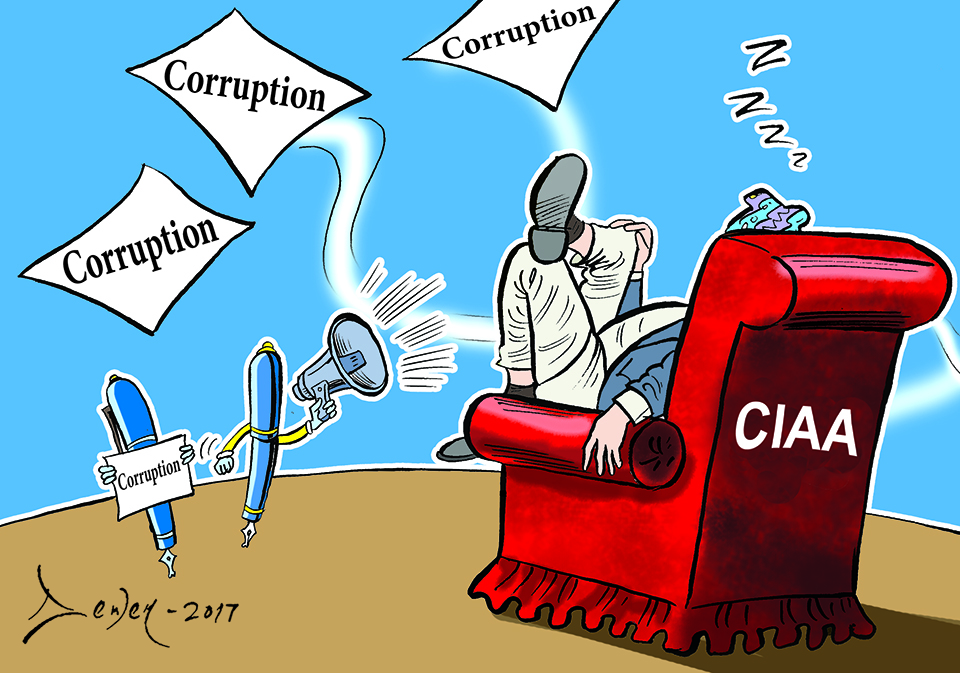 In Nepal, state sponsored mega projects are seen as serving as conduit for potential collusion between politicians and bureaucrats for corrupt practices. Such collusion will rip hard-earned tax payers’ money from state coffers without any moral compunction and fear of criminal sanctions. Hush money becomes umbilical cord uniting culprit parties. Let’s not underestimate most individuals are emboldened by greed and power of authority just being on higher government seat and where there is no effective oversight mechanism and sanctions. This psychic behavior grows and continues unabated without strong teeth and effective law enforcement power of Commission for Investigation of Abuse of Authority. CIAA exists, but is unable to assert itself as a powerful deterrent body against malpractices for no significant fish is netted yet. This is a huge setback in nation building process and good governance for development.

It is hard to ignore recent media reports on grand scale collusion between bureaucrats and politicians plundering huge sums of state funds that are being wasted on ‘glamorous’ project. Bureaucrats are more than willing to conspire, when opportunities occur, with politicians for personal security and gains, contrary to general expectation that bureaucrats are the vanguard of civil administration. Public frustration is thus growing against increasing reports of corruption.

Government-induced projects are disconnect between the needs of people and state’s desire for a glamour project. Generally, government projects are product of leader’s whim and political rhetoric which heavily falls on tax payers’ shoulder. Both politicians and bureaucrats are too complacent on oversight mechanisms and imposition of sanctions. Is this a right way forward in rhetoric of pseudo-economic development of nascent republic?

Reports of corruptions are disturbing. List of examples may not be exhaustive, but these are indicative of poor oversight, mismanagement of funds and absence of sanctions on abuse of authority. Auditor General’s recent report indicates disbursement of five billion rupees remained unaccounted for by spenders in various government departments. This is a lot of tax payers’ money. Further, millions of tax exemption granted to NCELL without transparent and justified reasons raises public concerns.

To make the matter worse, disappearance of 33 KG of gold confiscated months ago by Customs Department remains a mystery to general public for no one is held accountable yet in this heist. Public remains curious about the reappearance of banned Pappu Construction back in the business relationship with government. Controversies surrounding improvements of road between Narayangadh and Butwal, delays in construction of bridge over Tamakoshi River and completion of Gautam Buddha International Airport in Bhairahawa are equally alarming. Media reports suggest apparent unavailability of business plan of airport’s operability does not make the climate of confidence any healthier. Controversy surrounding printing of poor quality ten-rupee polymer banknote from Australia by Nepal Rastra Bank makes the list longer.

Why are we regularly hearing one controversy after another once government projects get going and advances to implementation? We hear individuals have risen from rags to riches, especially those who have right political connections. These individuals have amassed disproportionate fortune compared to declared earnings.

Two alarming stories of the past weeks relate to 4.38 billion rupees purportedly embezzled in collusion between government ministers and senior bureaucrats in buying two Airbuses. This is a staggering amount of tax payers’ money. Many concerned citizens are puzzled by government flying business of aircrafts through a failed airline instead of ensuring good governance, judicious use of tax payers’ money, and maintaining law and order. The other scandal relates to government minister and bureaucrats’ demand of 33 million rupees kick-backs at the final phase of long awaited Melamchi Water Supply project. This is not only appalling but might also lead to possible delays and cost overrun.

Recent media reports also indicated that lawmakers and government ministers were collecting ghost staff salaries, housing rental subsidy benefit while staying in own houses, cost of petroleum while riding bicycle. Most spectacular revelation is about one former Prime Minister and leader of a leading political party receiving ghost staff salaries. Isn’t this a mockery of abuse of authority and misuse of state’s coffer? How could one morally accept this when hard working poor majority continues to pay taxes?

Corruption saga does not end here. Think of planned felling of 2.4 million trees for the proposed construction of reportedly one of the largest International Airport in South-Asia in Nijjgadh, a glorified project without first undertaking mitigating measures for protecting environmental degradation and balancing bio-diversity by compensating loss of eco-systems in one the most important regions of Nepal.

Rumors of corruption at Land Revenue Department in the Valley and elsewhere are equally astounding. Nepalis are experiencing poor governance not witnessed in the past. Cancer of corruption is spreading across every sector.

Parliamentary sub-committee report on alleged misappropriation of billions of rupees on wide-body plane suggests how inefficient and corrupt our national flag carrier has become. It just proves that state enterprise, like this one, lacks accountability to tax payers by serving as conduit for malversation of funds. This is unfortunate. Honest and conscientious lawmakers must act against misuse of funds and abuse of authority by imposing stricter sanctions. This recurrent phenomenon underlines that government should not be in the running of business enterprise for it lacks market know-hows, skills and knowledge of industry.

It raises very fundamental question of why a poor country like Nepal needs to run airline business when service can be provided by private sector and private airlines are doing so satisfactorily on competitive basis. Government should stop pretending to be a competent entrepreneur for it is not. Private investors run airlines efficiently and adjust business plans swiftly as determined by market forces. Government can’t do this. On the contrary, government’s ‘white elephant’ enterprises, will only serve as milking cash cow as demonstrated by the purchase of two aircrafts. This revelation may only be a tip of the ice berg of government corruption.

It is unimaginable how a poor country like Nepal can afford such wasteful expenditure. The two reported cases of mismanagement of funds adds burden of loan of Rs 330 to each Nepali. Should not lawmakers step down from living on ivory towers to take a hard look at what’s happening on the ground and talk to ordinary people for what they want from their money earned from their sweat? Should not CIAA investigate such criminal acts?

Against mounting reports of corruption lawmakers should not remain silent. They must act on measures to curb abuse of authority and impose harsh sanctions against those implicated and accused of robbing tax payers.  Misappropriation and malversation of funds, bribes, embezzlement, abuse of power, nepotism, impunity and conflict of interests must stop.

Systematic costs overrun and time extension demonstrates inefficiency or built-in loopholes in the governance system. Why do government projects always overrun, and time lines extended? Obviously, it indicates something is seriously wrong with government machinery. It reinforces perception of lack of skills, managerial competency, relevant operational experience, and more importantly, lack of dedication to good governance and total disregard to accountability on tax payers’ money.

If corruption is not controlled we cannot hope for prosperity. Economic bounty does not come through the roof of open and globalized market economy. This is the high time to explore alternative ways of project development, financing, management and implementation so that tax payers’ money is not wasted any further.

Wide-body scam offers insight as to how our government is functioning. State seems inept in curbing this epidemic despite having a two thirds majority stable government. When will the general public feel tangible benefits?

The author is a retired UNHCR international staff and current President of We for Nepal, a Switzerland-based organization

If Prime Minister Oli wants to make the country prosperous on the foundation of corruption and misrule, he will surely... Read More...

NEA earns profits of Rs 8.50 billion in Q1, leakage reduction and energy export are the main contributing factors
52 minutes ago