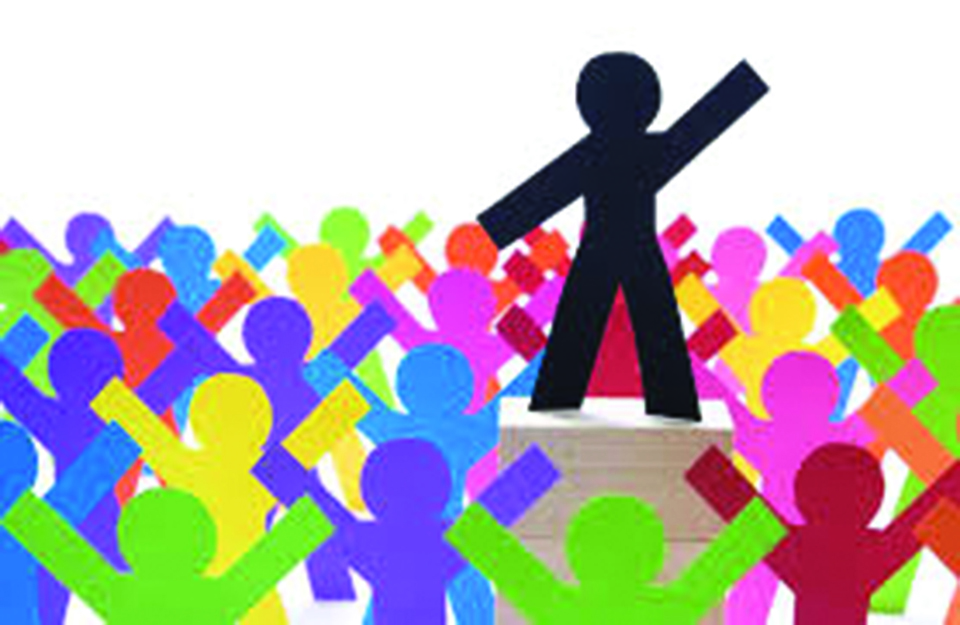 The deepening crisis of intraparty democracy brushes off the achievement of democratic values and legal standards and creates a feeding ground for brutal and egregious dictators. We are, in a true sense, living under a dictatorship.

Joseph Stalin once said to the Soviet Central Committee, ‘Either you are nothing in the eyes of the party or you are a party member with full rights.’ The pithy utterance of Stalin only assigns a minority of a population in a political identity to practice in-group favoritism to prevent any other alternative political identities within a party. The copycats of Stalin are still looming large in Nepali politics to get undue influence which poses challenges for political parties for entrenching and institutionalizing the culture of intraparty democracy. The early 1990s witnessed Nepal’s democratic shift from the Panchayat system toward a multiparty democratic system, but the political ethos of the politicians still lags in consolidating the internal affairs of the parties. The deepening crisis of intraparty democracy brushes off the achievement of democratic values and legal standards and creates a feeding ground for brutal and egregious dictators. We are, in a true sense, living under a dictatorship.

The transition from the Panchayat regime toward a multiparty democratic system was a special, pleasing movement as the monarchy was eliminated and power was handed over to the people’s government, but we are still far off from celebrating an institutionalized culture of intraparty democracy.

A culture of democratic debate and deliberation

A lively debate and discussion is a prerequisite for intraparty democracy. Mr Pradeep Gyawali in his article ‘Managing IntraParty Clash and Strengthening Democracy’ writes that internal democracy of parties implies making party members participate in intraparty discussions and decision-making processes to create an environment for the selection of capable leaders. However, the deeds and words of the leaders are not in accord. This is the bone of contention in the current dispute of the ruling CPN-UML. Unification of Maoist Centre and CPN-UML came to an abrupt end not because the Supreme Court quashed the unification but the reversal of the principal of intraparty democracy from both ends.

While implementing the parties’ decisions there exists a serious lacking in determining the sustainability analysis of the parties as decisions were taken based on win over opposite faction. The biggest weakness of the Nepali parties is that they are leader-centric and most leaders are unwilling to institutionalize the debate and discussions to increase healthy participation in the decision-making process. Pushpa Kamal Dahal, chairman of the Communist Party of Nepal (Maoist Centre) and KP Oli, chairman of the Communist Party of Nepal-Unified Marxist Leninist (CPN-UML) did not hold any intraparty discussion while deciding to merge the two parties into Nepal Communist party of Nepal (NCP). By doing so, they didn’t forget to call the process ‘democratic centralism’, but their stress was clearly on centralism. In most of the Nepali parties, things are no different.

Clause (4) (a) of Article 269 of the Constitution of Nepal 2072 has provisioned that the constitution and rules of the political parties must be democratic. Now, it is high time the Election Commission took a robust decision to take action against those who want to derail the constitutional provisions. The task appears earth-shattering, though.

How do political parties survive? Where does the money come from? How the politicians survive their extravagant life? Until now, the questions remain unanswered. In a democracy, political power is, in theory, supposed to achieve from free and fair elections. In practice, winning and losing elections is solely determined through the financial power of the candidate. Elections are funded by financial powers. It is for this reason; political parties often shape policy not as per the desires of their voters but their funders. Siphamandla Zondi, professor at the University of Pretoria, rightly said, “Democracy is not what we fought for, it is a road towards what we fought for.”

Article 269 of the Constitution of Nepal 2072 also confirms that the political parties registered with the Election Commission are required to maintain real accounts of their income and expenditure, appoint a responsible official for this purpose, get the income and expenditure audited within six months of the end of the financial year. The onus is on the Election Commission to dig out the bigwigs who steal and embezzle public money as they only show the tip of the iceberg. Elections should be transparent so that the voters can see who is bankrolling the politicians. Unfortunately, our election system has glaring holes; it couldn’t stop moneyed interest groups who enter politics clandestinely.

Why the CPN-UML has crowned a criminal-background, independent lawmaker Rajiv Gurung, alias Deepak Manange as the Youth and Sports Minister of Gandaki Province? Why Mohammad Aftab Alam, a Nepali Congress lawmaker, was given a ticket for the election of the House of Representatives of the federal parliament despite knowing that he has been accused of being involved in an explosion and subsequent murder of at least 23 persons in Rautahat? The answer might be easier for the leaders, but what about the voters who relentlessly dream of a better future for the nation?

Simply, succession planning is the strategy for passing on leadership roles that can uphold the spirit of party norms and values. How many political parties have we got that have succession planning? The probable answer would be none of them.

The succession planning of the parties has to frame in such a way that one should leave a legacy of leadership, i.e. character, choices, conduct, consistency, confidence and compassion to champion a unique style of leadership and state building endeavors.

The lack of a succession plan in politics encourages the creation of a coterie around the supreme leader. There is always a competition to fondle their supreme. The leader who encourages coteries rarely supports succession planning because it constrains their discretion and personal power.

Given this, political parties must be well-organized, sufficiently institutionalized and provide visionary leadership for the country. Can Nepali parties put a transparent succession plan that could pre-empt much of the quarrel that we have witnessed over the many years? What do you want your legacy to be?

In a nutshell, intraparty democracy is vital to galvanize and guide the development of democracy in society and parties could do so by setting an example in their own parties.

KP Oli’s tendencies are wholly and growingly anti-democratic. He seems to hold no conception that an MP’s power to vote... Read More...