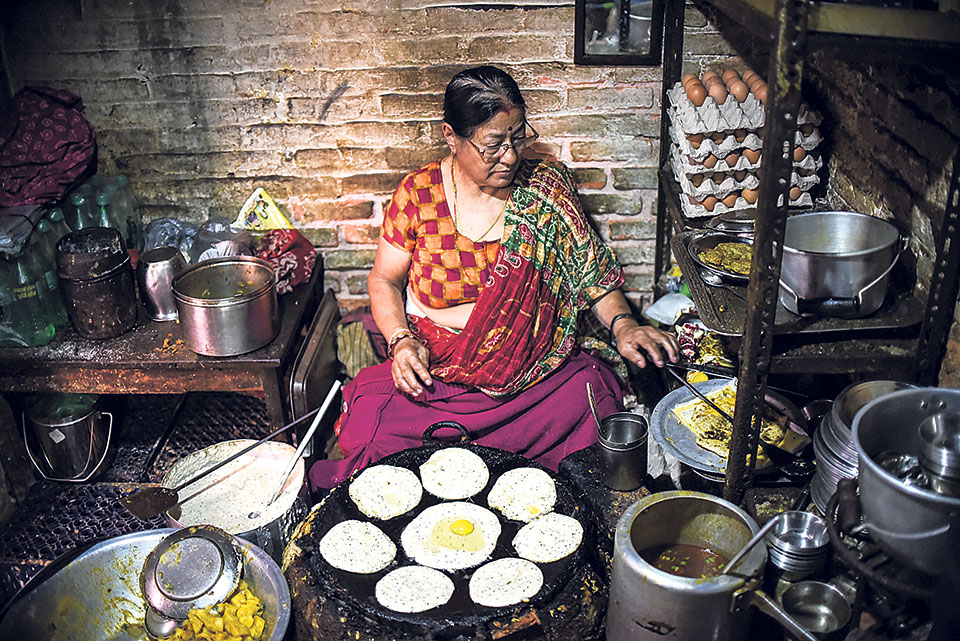 Biku Maya Bajracharya is 71 years old and one happy soul. From the year 1976 she has sold woh (Nepali pancakes) in a small corner tucked away in an alley behind the Nyatapola Temple in Bhaktapur. Amidst the splatter of Bhaktapur’s splendid colors, it sits unassuming and silent. People who have heard of her, make it a point to come to her for wohs once every week.

Just as Simon Gurung and Prashant Karmacharya, hundreds visit the eatery everyday. For Gurung and Karmacharya, who grew up in Bhaktapur, Biku Maya’s wohs taste of their childhood. They have come to her from the time they can remember. “Even today we come to Aama (as Biku Maya is affectionately called). We have brought our friends here and the taste somehow never gets old,” claims Gurung.

Her husband, Asta Ratna Bajracharya, initially started and ran the business. But after being hired for work, he handed the reins of control to his wife. Wohs (wohs are the appropriate term, bara is another doughnut like Newa dish entirely), for Bajracharya, is the staple she grew up loving and an important culinary component in Newari ceremonies. She had been selling masu-chiura (pan fried meat and beaten rice) and potato dishes that are a cross between being a pickle and a curry, when one customer urged her to start selling wohs. “I have sold whatever my customers have demanded for. Selling wohs began the same way too,” she says.

But deciding to sell wohs was only half the work done. Making them in a large scale required utensils and stoves that Bajracharya’s family didn’t possess. Accordingly, she borrowed a spatula from a neighbor and brought in a tawa (a circular girdle) from her maternal home. With borrowed utensils Bajracharya made some wohs and serves the same even 42 years later.

Her little food corner was never officially named and it still has no signboards with the help of which you can find it. However, it doesn’t need a signboard anymore. Visitors just seem to know where it is. Or just simple asking will lead you to her. It’s referred to as “Aama ko woh” by her customers.

The first thing that grabs your attention as you enter the eatery is the large mud caked stove, an even larger girdle of sizzling wohs, and tubs of woh batter. In early days, Bajracharya cooked over firewood and woke up at four in the morning everyday to churn maas ko daal (black gram) and moong (green gram) that she soaked the night before. But LPG and grinders have done her a world of good. Her youngest daughter-in-law or someone from her family help her with the grinding now.

All day long, Bajracharya stays seated at a corner of her eatery spreading dollops of batter on the pan and flipping the wohs. You could also ask her for egg and meat toppings. She starts cooking a few hours before the first customers arrive. “There are too many to keep up so I have to start cooking beforehand,” she clarifies.

You could also add some green bean soup to your wohs as done traditionally. Along with the wohs, she also sells the potato dish and it is just as loved too. Her daughter-in-law, Sangita Bajracharya, helps her in managing the eatery. Sangita had a tailoring business prior to getting married but quit soon after. She’s helped her mother-in-law for nearly 12 years now and is the next in line to take over the business. “She cooks just as well as me,” says Bajracharya.

Although all the sitting through the day hurt her knees Bajracharya explains that she is adamant to keep cooking as long as her body allows. “I wouldn’t be getting all the love and being able to talk to so many people if I was staying idle at home. I’d rather be here cooking than anywhere else,” she says.
Bajracharya cooks not with the methodical precision that comes with decades of cooking but with intuition. The wohs aren’t proportionately sized or a replica of one another. She cooks understanding what makes a woh good and does it with meticulous attention and good humor.

“I’m not as rigid with my food choices as one may assume. Although I sell traditional food, I wouldn’t say no to some pizza now and then,” she admits. For 42 long years Bajracharya has delighted the residents of Bhaktapur with her delicious wohs and now people from far away, including foreigners, come to her too. This delights her and she feels it almost gives her celebrity status, and she says she will continue with it for as long as she possibly can. If you haven’t been to Bhaktapur and tasted “Aama ko woh”, we suggest you do and we guarantee you will go back for more. 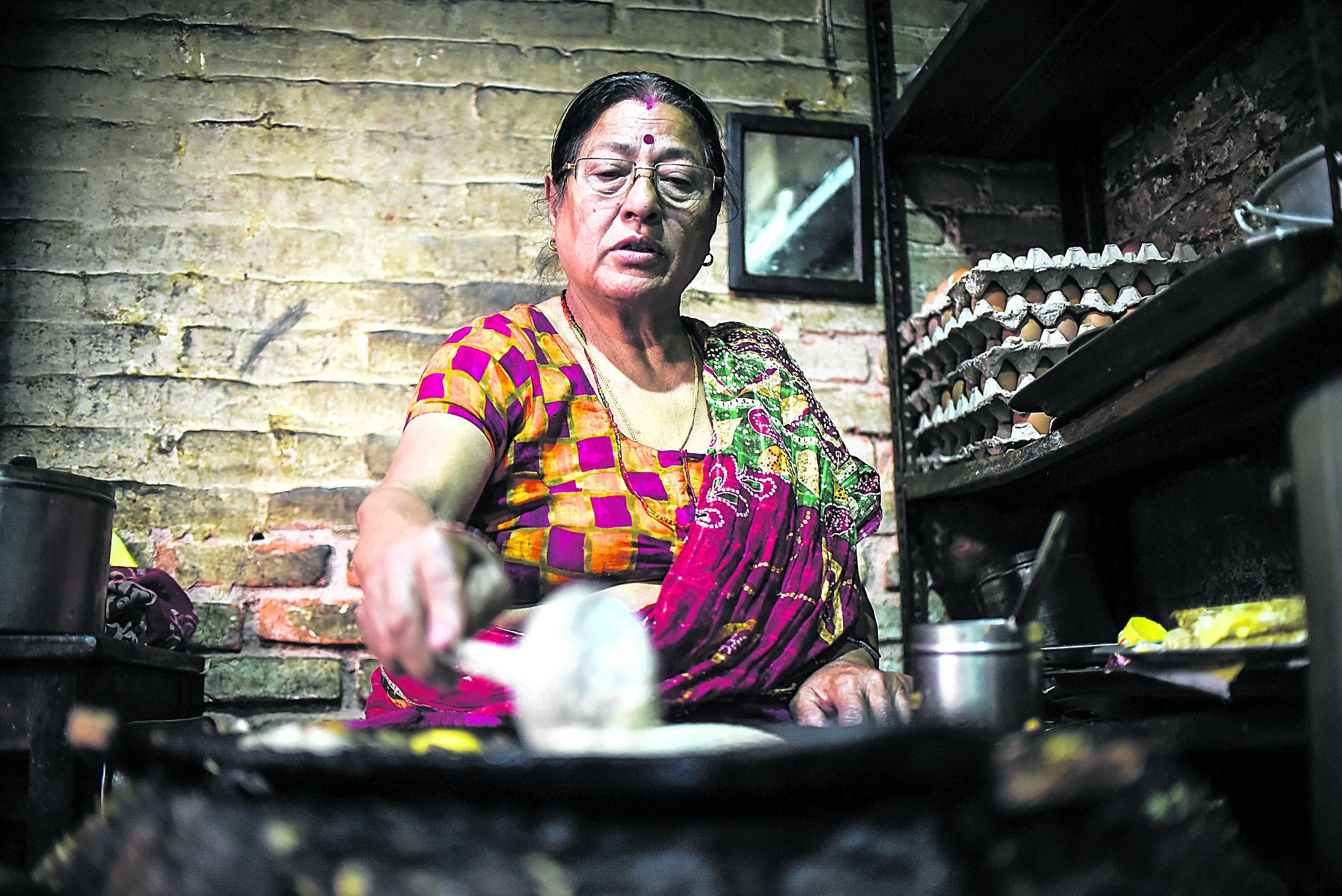 Getting it just right

Restaurants don’t just bank on food. Alongside a good meal, there is the question of ambience, service and being able... Read More...

ROLPA, Jan 21: As many as 73 youths of Jelbang sacrificed their lives during the decade-long Maoist insurgency. This village... Read More...