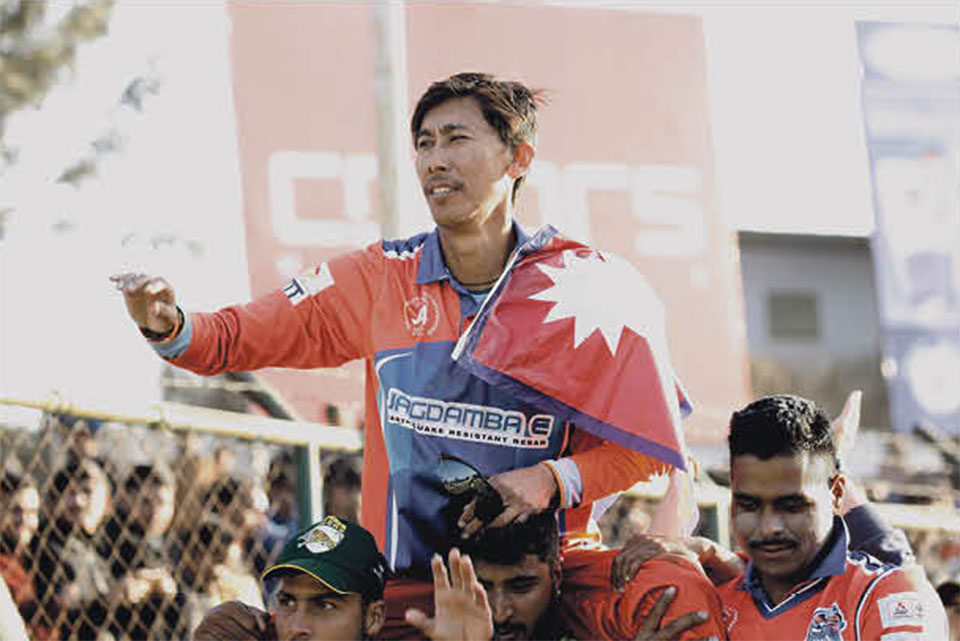 KATHMANDU, Dec 16: The Nepal's all-rounder cricketer Shakti Prasad Gauchan retired from all forms of cricket after his team crashed out of the ongoing Everest Premier League (EPL) on Saturday. Gauchan-led Pokhara Rhinos' match against Chitwan Tigers at the Tribhuvan University international cricket ground in Kirtipur was his final match as a professional cricketer. Gauchan had retired from international cricket in July after playing for the national team of Nepal against the Netherlands.

“I had desired to end my career in front of the Nepali crowd. There could be no happier moment than that for a player. So, I have decided to hang up my bat after playing a domestic tournament in Nepal,” said an emotional Gauchan after his team members carried him on their shoulders to complete a round trip of Kirtipur cricket ground.

The iconic left-arm spinner was handed the responsibility to captain his EPL franchise in place of its regular captain Kyle Coetzer for one final time for his last professional cricket match in front of 10,000 spectators.“To be able to play in front of the home crowd and bid farewell to cricket is one of the best moments for my cricketing life,” said Gauchan. He bowled 18.5 overs in five matches during the tournament taking two wickets and conceding seven runs per over. Rhinos lost all five games of the tournament and have been eliminated.

The 34-year-old cricketer had previously announced his retirement from international cricket back in July after the Netherlands ODI series in Amstelveen. The veteran spinner had continued playing in domestic cricket with his appearance for Chitwan Rhinos in Pokhara Premier League and Pokhara Rhinos in EPL.

The lanky left-arm spinner has eight T20 international wickets and 18 List-A wickets to his credit. He also played four first-class matches for Nepal during the ICC Intercontinental Cup in 2004 and 2005. He was a top-order batsman when he first started his career. He was only the second ever Nepali batsman to score an international century when he slammed an unbeaten 106 off 103 balls against Italy during the ICC World Cup Qualifying Series in 2005. He then became the first Nepali player to register a hat-trick against Denmark during a Group A match in the ICC World Twenty20 Qualifiers in Dubai in 2012. His greatest performance remains the immaculate spell of 10 overs where he conceded only two runs and took three wickets including eight maidens against Malaysia in the ICC World Cricket League Division 4 in Kuala Lumpur in 2012. His most celebrated performance came in the ICC World T20 qualifying stage in 2014 when he picked up the man-of-the-match award for a three-wicket haul in a win against Hong Kong in Bangladesh.

Govt does not have authority to illegally ban citizens from traveling abroad: SC
23 hours ago