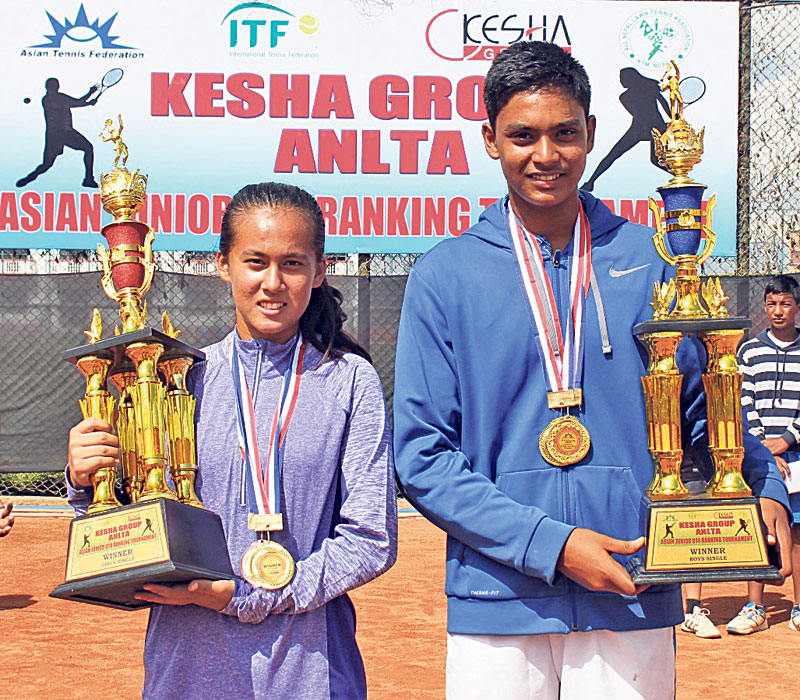 Ira Rawat (l) of Nepal and Arnabh Pathange of India pose for a photo with their winners trophy after winning in the girls’ and boys’ final of the Asian Junior Tour U-14 Ranking Tennis Tournament in the capital of Friday. (Photo Courtesy: Nsc)

In the final match played at Satdobato, Ira defeated Sambhavi in straight sets of 6-4, 6-2 while Arnabh overcame Aadit 6-2, 6-2 in the boys’ section of the tournament organized by the All Nepal Lawn Tennis Association.

Laxmanya Shrivastav of India grabbed the third position in the girls’ section while Prerana Koirala and Bhilasha  Nista of Nepal  remained in the fourth and fifth positions respectively. Indian player Tanisha Pranjal wrapped up the tournament in the sixth position and Rayana Shah, Priyanka Chaudhary and Ishashree Shah of Nepal claimed the seventh, eighth and ninth positions respectively.

In the boys’ section, Samyak Bhusan Bajracharya of Nepal grabbed the third position while Indian trio Amitoj Sachdeva, Ambitious Goldsmith and Aryman Meheta finished the tournament in fourth, fifth and   sixth positions respectively. In the same event, Saharsha Chand remained in the seventh position while Batsal Shrivastav, Shrikant Thakur and Shashikant Thakur of India finished in the eighth,  ninth and tenth places.

Keshabh Raj Pandey distributed  the prizes to the winners.
All together 44 players in the boys’ and girls’ sections had participated in the tournament that started from September 5. The matches of the circuit two will begin from September 11.

Ira, Shambhavi to vie for the title

A beautiful mind (with video)
3 hours ago