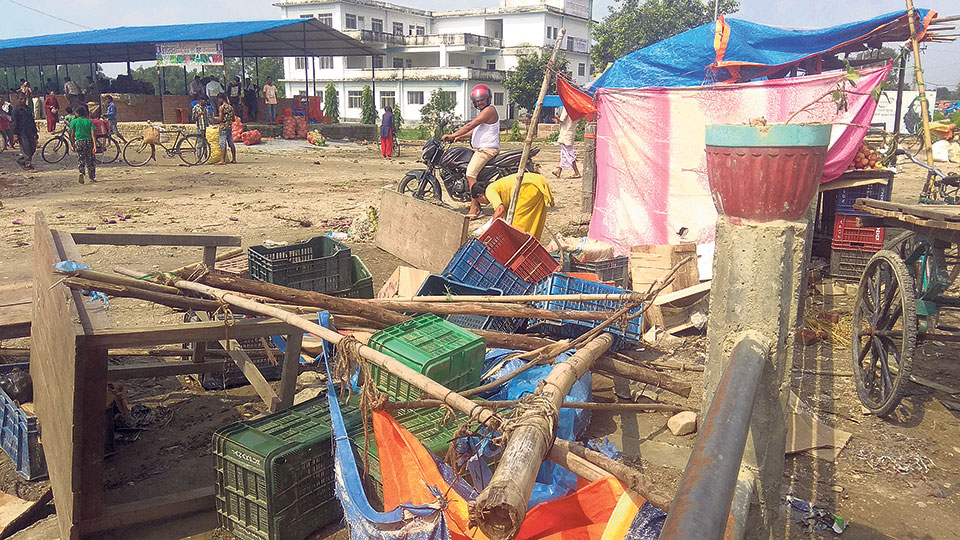 Fruits and vegetable shop tents demolished by contractor in Lalbandi Municipality in this recent picture.

SARLAHI, Sept 16: Contractors have demolished tents of fruit and vegetable sellers along the East-West Highway after their owners refused to pay additional tax amount. Ashok Sah, who sells vegetables in a cart, informed that the municipality fixed a tax amount of Rs.12 per day but the contractors asked Rs.40 per day from the vegetable and fruit sellers.

"They threatened us and were forcing to pay Rs 30 to Rs 40 as tax," said Sah. "When we told them that we are not ready to pay tax more than what is determined by the municipality, they demolished our tents and tied four of our carts with chain."

Binod Kapur who has been selling fruits on the highway since the last two decades laments that the contractor's entrusted with the responsibility of collecting tax are making it difficult for them to make a living.
"They are forcefully collecting huge amount of tax stating they have to collect Rs. 5 million," said Kapur.

According to him, contractors misbehave with the women and children if they refused to pay the demanded tax. Not just that, they even scold you if you ask for receipt of the paid tax. On Saturday, contractors misbehaved with journalists for capturing the picture of demolished tents. Gyanu Yonjan, a member of the contractor groups, claimed that they have accepted the contract to raise Rs 5 million in tax revenue for the municipality. To meet that target, he claimed that they are collecting tax. "Some of them refused to pay the tax stating all shops were owned by a single individual," said Yonjan, adding, "We have demolished tents of such people only."

Minister Jhakri hospitalized
11 hours ago
Govt recommends ambassadors to India, UK and the USA
7 hours ago