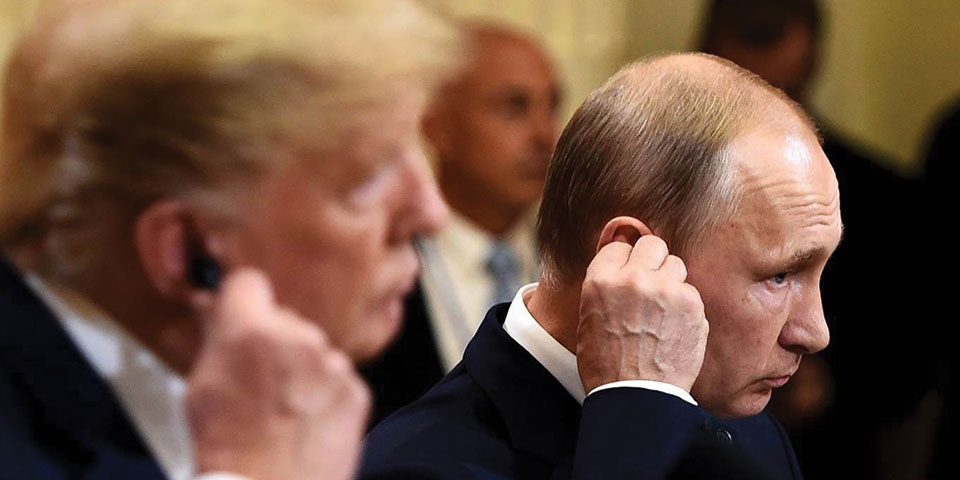 Putin has been running the table on Trump and the US. Though some of his bets have worked out better than others, the net result is that Russia is now a serious player

NEW YORK – At a summit with US President Donald Trump in Helsinki earlier this month, Russian President Vladimir Putin proved that he remains a master of the tradecraft he perfected in the 1980s as a Soviet operative in East Germany. Trump wilted under Putin’s impassive KGB-trained gaze.

After the summit, Trump declared that he trusted Putin’s assurance that Russia had no reason to meddle in the 2016 US presidential election. The statement, which contradicted US intelligence agencies, was quickly condemned by many in the US security establishment, US Democrats, and even some Republicans. Paul Ryan, the Republican speaker of the House of Representatives, said that Trump “must appreciate that Russia is not our ally.” Some went so far as to call Trump’s behavior “treason.”

Trump, as usual, quickly backtracked, claiming that he had misarticulated a “double negative.” “The sentence should have been, ‘I don’t see any reason why it wouldn’t be Russia,’” he asserted. But then, in another characteristic move, Trump hedged his correction: “It could be other people also. There are a lot of people out there.” Now Trump says that if Russia does meddle again, it would be to support the Democrats.

All of these flip-flops have reinforced the belief that Putin has something on Trump, a perception that the Russian president seems to welcome. In Helsinki, Putin confirmed that he had wanted Trump to win the election—a calculated move, no doubt, that he knew would seem to corroborate accusations that Trump’s presidential campaign colluded with the Kremlin. Given how beneficial the Trump-induced chaos has been to Russia thus far, Putin must have decided to stir the pot more vigorously.

Of course, in the long and complex history of US-Russia relations, each country has meddled in the other’s domestic affairs. During the Cold War, the Soviets sponsored the Communist Party USA.

After the Soviet Union collapsed in 1991, the Americans were heavily involved in the transition process, contributing to the chaotic capitalism of the Boris Yeltsin era. In fact, it was partly those Western-driven reforms, which did more harm than good, that helped bring Putin to power in 2000. Russians wanted a leader who wouldn’t listen too closely to US advice.

Now, it is Putin who is meddling in American politics, not only by attempting to sway the election, but also by wielding considerable influence over Trump himself. Arguing that his efforts to improve relations with Russia are in America’s national interest, Trump, shortly after the summit, invited Putin to visit the White House in the near future. Putin has just reciprocated with an invitation for Trump to come to the Kremlin.

But Trump’s enthusiasm (and desire to defy his critics) is no substitute for a genuine openness to mutually beneficial cooperation, like that seen in 1959, when Dwight Eisenhower invited Nikita Khrushchev to visit the US, and in 1986, when Mikhail Gorbachev and Ronald Reagan met in Reykjavík. Instead, Trump’s actions just look like more kowtowing, raising the hackles of other US leaders. For many members of the US security establishment, Putin’s apparent influence over Trump poses an existential threat to American democracy, much as the Soviet Union did at the height of the Cold War.

But mounting hysteria over Russia also amounts to a serious threat, as it is neutering US foreign policy in ways that may end up delivering to Putin the global influence that he craves—and for which he has been happy to take big gambles. He invaded Georgia in 2008, annexed Crimea in 2014, and intervened in Syria’s civil war to support his ally, Bashar al-Assad. Brazen meddling in the US election to weaken Hillary Clinton, a stern Kremlin critic, fits this pattern.

Let’s face it: Putin has been running the table on Trump and the US. Though some of his bets have worked out better than others, the net result is that Russia is now a serious player. And, convinced he can get away with pretty much anything, Putin keeps raising the stakes.

Ultimately, however, it is Trump’s aberrant—and increasingly abhorrent—presidency that poses the bigger global threat, not least by offering Putin more opportunities to engage in adventurism and degrade US power. Trump’s trade war, which targets even America’s closest allies, is a case in point, as it has helped drive more countries toward rapprochement with Russia.

Germany—which Trump, with a straight face, has called a “captive of the Russians”—has responded to Trump’s actions, including his opposition to the Nord Stream 2 natural gas pipeline linking Russia and Germany. Chancellor Angela Merkel calmly stated that “we can make our independent policies and make independent decisions.” Likewise, China, the primary target of Trump’s trade war, has now agreed to a Russian plan to retaliate against the announced deployment of US missile-defense systems in Japan and South Korea.

When asked why Nikita Khrushchev was removed from power, the longtime Soviet politician Andrei Gromyko allegedly joked, “Khrushchev was so reckless a gambler, we would be lucky to hold on to Moscow.” Gromyko, after all, had had to deal with Khrushchev’s impulsive gamble of the 1962 Cuban Missile Crisis during his time as foreign minister (though that gamble ended up paying off, in the form of a US commitment not to invade Cuba).

Nowadays, it’s the reckless White House occupant who is the biggest problem. A loser when he was gambling with other people’s money in the casino business a generation ago, Trump is now betting a far more precious asset. By the time he leaves the table, the US will be lucky if it retains any of its global credit.

Nina L Khrushcheva is Professor of International Affairs at The New School and a senior fellow at the World Policy Institute
© 2018, Project Syndicate
www.project-syndicate.org

Trump’s deficit-busting tax cuts and increases in government spending make no sense for an economy with an unemployment rate of... Read More...

HAMBURG, July 9: Why, yes, that was Ivanka Trump briefly filling her father's seat at the Group of 20 summit,... Read More...

How the polls missed Trump's victory

Two days ago, pollsters and statisticians gave Hillary Clinton odds of between 75 and 99 percent of winning the U.S.... Read More...