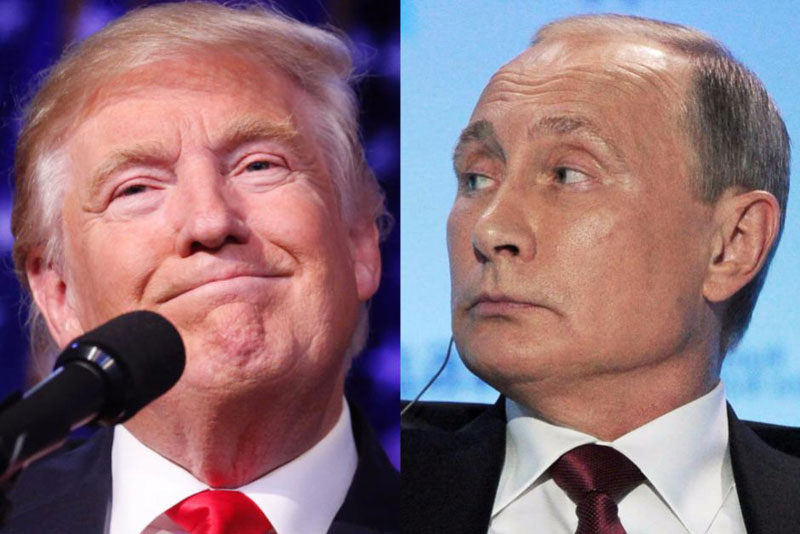 Russia was never fully welcome in the Western world order. That is why Putin has sought to create his own international order
I hate agreeing with Vladimir Putin, even a little. Russia’s president is dragging his country—the country of my birth—backwards, and falsely argues that violating international law is somehow good for Russians. But the hysterical response of Americans to the Kremlin’s alleged efforts to influence the US presidential election has forced me to look at things from Putin’s perspective.

To be sure, the US intelligence agencies’ allegations that Russia purveyed fake news and released hacked emails, in order to hurt Hillary Clinton’s chances against Donald Trump, are not baseless. It is certainly in Putin’s character to purloin secrets and create disinformation; he was a KGB operative, after all.

Likewise, the accusations that Putin is holding a dossier of compromising material on Trump, though uncorroborated, also ring true. It would make little sense for Russia to spare Trump, of all people, from its schemes. And, beyond Trump, Republican Party leaders must know that if Russia hacked the Democrats, their own servers must have been hacked, too.

Even if the alleged dossier’s sensational details are not accurate, chances are that Russia is holding at least some compromising business records, or even Trump’s tax returns—information that Trump has worked very hard to keep hidden from the American public. If Trump doesn’t play nice, taking Russia’s side on issues ranging from NATO to Ukraine, he will likely see his secrets laid bare, just as Clinton’s were.

The US response to this prospect has been extreme. Those firmly in Trump’s camp are willing to indulge the fragile bromance between Trump and Putin, despite its obvious vulnerability to exploitation by both sides. Others, including some senior Republicans, cite the recently released US intelligence report on Russia’s suspected interference in the election and demand stern measures against Putin’s government, even though a new Cold War is clearly in no one’s interest.

In my view, the intelligence report itself was fundamentally problematic. Full of conjecture and bias, the report is based on the argument that Putin must be an enemy, because he doesn’t share Western values. But how could he? Russia was never fully welcome in the Western world order, much less able to participate in it on equal terms. That is why Putin has sought to create his own international order.

In fact, in the early days of his presidency, Putin wanted Russia to be part of Europe. But he was immediately confronted with NATO’s expansion into the Baltic states. In 2006, then-President George W Bush’s administration announced plans to build a missile-defense shield in Eastern Europe, in order to protect the Western allies against intercontinental missiles from Iran. Russia viewed the plan—which President Barack Obama went through with last year—as a direct threat, and a sign that calls for closer ties should be regarded with caution.

The US has supported anti-Putin forces since 2008, but ramped up that support in 2011, when Putin, then the prime minister, prepared to return to the presidency. In 2013, the US cheered the protests in Ukraine that ultimately ousted the pro-Russian president, Viktor Yanukovych. But while Yanukovych was undoubtedly a crook, the US supports plenty of crooks. Its effort to deny Russia, or any other power, the right to possess similarly odious factotums is pure hypocrisy.

Such duplicity has pervaded US foreign policy. Bush’s war in Iraq was launched on the basis of tendentious intelligence. For his part, Obama supported the Arab Spring uprisings, but offered no pro-democratic strategy—an approach that has led Libya to become a failed state, Egypt to become even more dictatorial, and Syria to collapse into nightmarish and protracted conflict. Meanwhile, the US National Security Agency was spying on everyone, whether friend or foe.

The US intelligence report asserts that Putin is seeking to undermine liberal democracy.

It seems clear, however, that his more immediate goal is to expose the West’s double standards, thereby breaking down Western barriers to his pursuit of Russian interests. If the US can behave so badly without apology, Putin’s thinking goes, why should Russia be denied its sphere of influence in, say, Ukraine?

For that matter, why shouldn’t Putin have attempted to help out Trump? Ukrainians campaigned for Clinton, believing that she would advance their interests. It is perfectly reasonable that Putin would back Trump, who had repeatedly expressed admiration for his leadership, over Clinton, who had compared him to Adolf Hitler. The notion that he shouldn’t take steps to protect his interests is ideological partiality disguised as objectivity, and it lends credence to Putin’s claims that the West is out to get him.

Don’t get me wrong: despite its imperfections, the US remains a positive force in the world. Indeed, it may well be the only strongly positive force, along with the European Union, which should stop squabbling and start curtailing megalomaniacal and illiberal leaders like Hungary’s Putin-infatuated Prime Minister, Viktor Orbán.

Moreover, the prospect that their new president is in Putin’s pocket should certainly be worrying to Americans. And the West’s policies toward Russia—economic sanctions or military exercises in border countries like Poland—are not necessarily wrong. What is wrong is that those concerns and policies are driven largely by anger over Putin’s own nationalism, rather than by a careful consideration of the diplomatic and strategic milieu.

If the US allows itself to become caught up in suspicion and conjecture about Russian involvement in its recent election, it will most likely find itself locked in an even more destructive confrontation with Putin. Instead, the US should devise a sound, thoughtful, and measured approach toward Russia—one that appeals to values not as propaganda, but as the basis of a more straightforward and credible foreign policy.