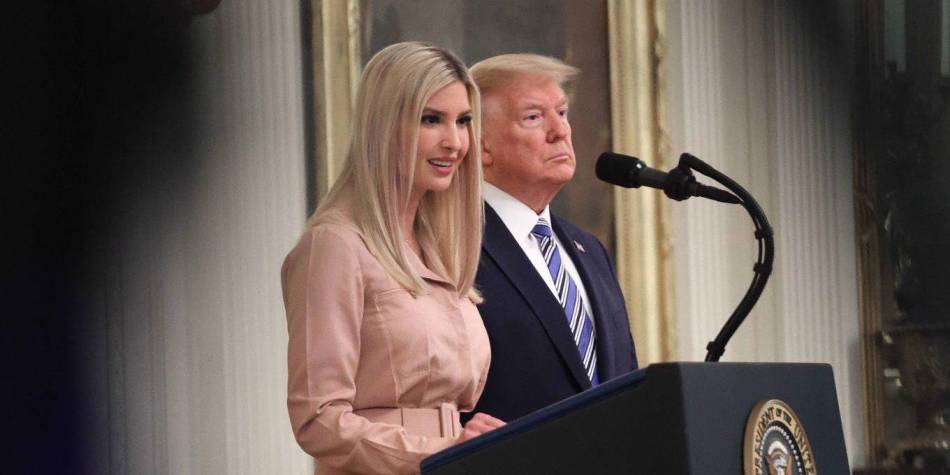 For the Trumps, Ivanka may well be the ideal frontwoman. She is as soulless and cutthroat as her father, but more polished and polite, and she seems to be at least partly aware of the flaws in the Trump brand.

NEW YORK – In her autobiography, The Trump Card: Playing to Win in Work and Life, Donald Trump’s eldest daughter, Ivanka, described an incident involving her father and his second wife, Marla Maples. The family was supposed to take their private plane to Florida, but Maples was late. Just as they were about to take off, a mere five minutes behind schedule, Ivanka saw a car pull onto the tarmac. Maples rushed out. But when Ivanka pointed this out, her father refused to have the pilot stop. His “frantic and frazzled” wife would just have to watch from the tarmac as their plane disappeared into the clouds.

One might think Trump’s behavior heartless and cruel. One might see an empty, ego-driven bid to assert control over those who fail to obey. But, in Ivanka’s eyes, it was a necessary life lesson in punctuality. Decades later, she seems to have internalized many of her father’s teachings in callousness, added a dutiful Stepford Wife veneer, and established herself as his most formidable—and dangerous—heir.

Five years ago, I would not have wasted a moment thinking about Ivanka Trump. I would have happily left her celebrity life—first as a model, then as an executive of her ersatz fashion label—to the tabloids. I would never have written about her father, either. Yet this gold-plated family’s takeover of much of America’s political, psychic, and even spiritual life leaves little choice but to pay attention.

This is not only because the patriarch served a term as US president. Just as Trump made all his adult children senior vice presidents at the Trump Organization, he turned his White House into another failing branch of the family business. For Ivanka, that meant becoming a “senior adviser” to the president. Four years later, and with no accomplishments to her name, she seems to be preparing for a political career of her own.

In a sense, Ivanka has little choice but to embrace politics. She built her career on the family name. Her modeling jobs depended on her father’s status and her mother Ivana’s modeling legacy. And her fashion brand was simply other people’s designs, with her name on the label.

But, after Donald’s malignant presidency, the Trump name has become toxic in the fashion world. Major retailers like Nordstrom and Neiman Marcus dropped Ivanka’s product lines years ago. And some former commercial partners have complained about her unethical practices.

So, instead, Ivanka will carry her father’s political brand forward. But with New York giving the Trumps a “Bronx cheer,” Ivanka’s likely launch site will be Florida—a state her father won in 2016 and 2020, and the home of his glitzy Mar-a-Lago resort and country club.

Late last year, Donald changed his official domicile from Manhattan to Mar-a-Lago, which he seems intent on making his primary residence after he leaves the White House, though residents of Palm Beach are fighting hard to stop him. For her part, Ivanka recently purchased a $30 million waterfront lot near Miami Beach.

This suggests that Ivanka may be considering a Senate run, especially if her father plans to run for re-election in 2024. But, given that her father openly considered making her his vice president in 2016, there is also a chance that “The Donald” will operate from the sidelines, while Ivanka pursues the top spot on the 2024 Republican ticket.

For the Trumps, Ivanka may well be the ideal frontwoman. She is as soulless and cutthroat as her father, but more polished and polite, and she seems to be at least partly aware of the flaws in the Trump brand. For example, with her 2017 book, Women Who Work: Rewriting the Rules for Success, she attempted to position herself at the nexus of ambition and relatability.

Of course, the vast majority of successful women did not ascend a golden, Trump-branded escalator. They took the stairs. Not surprisingly, Ivanka’s self-aggrandizement comes across as exceedingly tone-deaf to many “women who work.” At last year’s World Economic Forum annual meeting in Davos, then-International Monetary Fund Managing Director Christine Lagarde seemed shocked when the US president’s daughter interjected in a discussion among world leaders. She also raised eyebrows in 2017, when she took her father’s seat among heads of state at a G20 Summit.

Of course, Trump didn’t invent nepotism, and political dynasties are a longstanding American tradition. Hillary Clinton and George W. Bush benefited more from name recognition than actual achievements. Liz Cheney would not be one of the most senior Republicans in the House of Representatives if her father wasn’t former Vice President Dick Cheney. To this day, barely an election passes in which a Kennedy isn’t running for a House seat.

And how can I, with a name like Khrushchev, possibly rail against nepotism? For starters, my name will not get me an office in the Kremlin; on the contrary, in Vladimir Putin’s Russia, I am mentioned in civics textbooks as an exemplar of how not to be Russian. Even when my great-grandfather, Nikita, led the Soviet Union, blatant nepotism wasn’t an option. In the 1950s, when he made his son-in-law, Alexei Adzhubei, part of his brain trust, tongues wagged. In the secretive milieu of Soviet politics, family members rarely became public figures. And when Boris Yeltsin, Russia’s first post-Soviet president made his daughter Tatiana his formal adviser with a Kremlin office, critics called it a blatantly corrupt move.

But even among beneficiaries of nepotism, the Trumps are a step beyond corruption. For them, nepotism is just the start of the self-dealing. That is why Ivanka’s budding political career should worry everyone.

Ivanka Trump is just as greedy and narcissistic as her father, and just as merciless as the man who left his wife on the tarmac. If she does end up breaking the presidential “glass ceiling” in 2024—possibly after defeating Liz Cheney in the Republican primary and Vice President-elect Kamala Harris (who owes her success to her own hard work) in the election—it will not be because she deserves it. And she will use her power just as her father has: for the Trumps and no one else.

Report shows US deficit to exceed $1 trillion next year

WASHINGTON, Aug 22: The federal budget deficit is expected to balloon to more than $1 trillion in the next fiscal year... Read More...