To Modi, with memories 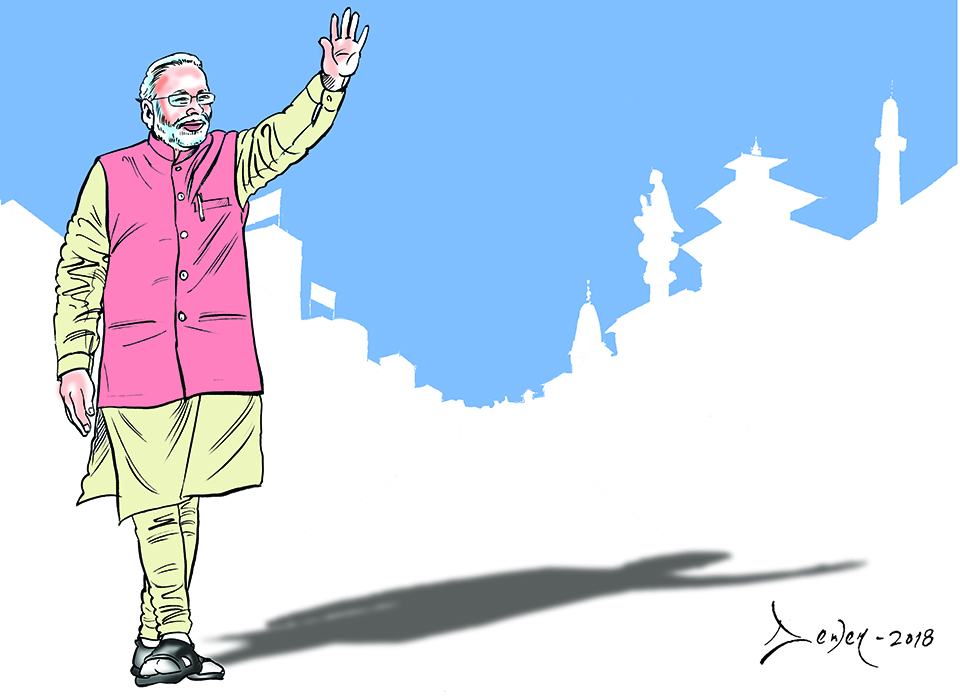 Indian Prime Minister Narendra Modi evokes two distinct sets of memories in Nepal: One very pleasant the other very bitter. When he addressed Nepal’s Constituent Assembly in August, 2014 he enthralled the audience. “This is the land which has given birth to Lord Buddha,” he said and the lawmakers cheered. “In every war that India has won, there is a sacrifice of Nepalis. There is not a single war India has won in which a Nepali may not have been martyred. I pay my respect to the brave Nepalis who have lived and died for India. Nepal is the land of the bravest of the brave, he said, and we applauded.

He promised to stay away from Nepal’s internal politics. India’s job is not to interfere in Nepal, he said, India’s job is to help Nepal in the directions it chooses and the decisions it makes. This is our commitment, he stressed.  Here comes an Indian leader of distinction, we thought.

He won Nepali hearts when he said if you cannot sleep well, nor will Hindustan. How can India be happy when a Nepali brother is hungry? Your happiness is my happiness, your trouble is my trouble and your sorrow is my sorrow, he went on.  Modi commanded respect and popularity none of his predecessors may have earned in the recent times.

Modi changed this tune in not less than a year. When he came to Kathmandu in November, 2014 to attend SAARC summit, he was a different man. He started to say constitution should be drafted by consensus, not by majority. He warned that Nepal will find itself in a serious trouble if the constitution is brought through a majority vote (then no one had thought this ominous prophesy would come true a year later). Nepal watched him with apprehension.

Then in 2015 when Nepal was in the final leg of constitution promulgation, he sent a special envoy with the veiled warning that if Nepal is to bring the statute it should be to India’s liking, or it had better not come. Nepal chose not to relent and result was the blockade. These memories will be revisited when Modi will come to Nepal next week.  What he does and says this time will determine how Nepal and Nepalis will cope with these bitter and sweet memories.

Many things have changed in Nepal-India relation since then. Nepal now has local, provincial and federal governments under the constitution that India had only “noted.”  Nepal seems to stand on the road to stability but everything is not right.

The much talked about left unity has not materialized so far.  Maoist Chairman Pushpa Kamal Dahal is rooting for ‘equal and dignified status’ in to-be-unified party. Dahal is largely seen as an unpredictable leader. Perhaps the only time he stood firm and unflinching was during constitution promulgation and few months thereafter. Otherwise, he has proved himself to be a vacillating figure.  Madhesi parties, for which Prime Minister K P Oli has reserved some ministerial berths to bring them on board, have not joined the government.  Their condition being that amendment on boundary demarcation should be ensured, which is so tricky Oli won’t be able to address it. Then there are voices from some sections in India that India should exploit this situation to its advantage so that Madhesi parties and Maoist Center can be used to exact revenge if Nepal gets close to China or ignores Indian interests.  If India seeks to manipulate these spots, it will backfire.

So what do people expect of Modi? He may evoke ‘special and brotherly relation’ narrative,  some deals may be signed, talks of expediting pending projects might be repeated, he might promise full support for Nepal’s development and prosperity but this is not what large majority of Nepalis want to hear from him.  Nepalis want him to at least express some remorse, if not apology, for the blockade.

The apology call started in social media after it was reported that he would be accorded civic felicitation in Janakpur.  “If Prime Minister Modi really wants to restore India’s relations with Nepal to its potentials, he must apologize for India’s coercive diplomacy that resulted into five month long blockade at the Indo-Nepal border causing immense economic, political and psychological loss to Nepal,” tweeted Madhu Raman Acharya, a former diplomat recently.

We may demand it but do not “expect” PM Modi “to apologize for the Blockade his government inflicted on Nepal. But one hopes he does not use Nepal for his electoral and other domestic purposes during his upcoming visit. But I feel it is too much to ask, he being who he is,” responded Kanak Mani Dixit, the journalist and writer who strongly stood and consistently wrote against the blockade.

The blockade narrative has found space in political discourse again. When Oli was in India early April, Nepali Congress president Sher Bahadur Deuba called him a lampasarbaadi—someone who prostrated to India—and said that his version of nationalism was fake. One of the persistent themes of central committee meeting deliberations within Congress has been how the party failed to speak up against blockade. They ascribe their defeat in local, provincial and parliamentary elections of last year to inability to toughly respond to the blockade.

I try to abstain from mentioning the blockade. “Don’t you have anything else to write about but the blockade?” some readers question when I do. Well-meaning Indians hang their heads low when blockade is mentioned in public forums. In private conversation, they share with Nepalis that they were never happy with India’s coercive blockade diplomacy and that it was the biggest blunder of Narendra Modi’s administration.

Indian people have regards for Nepalis and vice-versa. People-to-people relation between the two countries has always remained special and cordial.

Why India took up this coercive diplomacy is unfolding in bits and pieces. One telling explanation is that Modi wanted Nepal do away with secular provision in the constitution in some way. Nepali leaders promised this with him but did not keep the promise.  That may be true.  But more than that, it was the result of listening to wrong advice from wrong people. Nepal’s constitution is not as perfect as claimed (a lot of inadequacies, ambiguities and vagueness have been identified in the course of its implementation) but it is not as bad as Indian thinkers and a section of Nepali intelligentsia portrayed back in 2015.

We have come a long way since 2015. Modi is fighting for the next term in 2019. He will have to build political capital by living up to his ‘neighborhood first policy’ promise. In Nepal, Prime Minister Oli won’t be able to take anti-India posture like in the past because he is in power. Oli’s diplomacy is being tested on how and whether he will be able to free the country from one country dependence for trade and transit. In other words, he is being tested on whether he will be able to implement the trade and transit agreements he signed with China in 2016—without inviting overt Indian displeasure.

Thus India’s policy on Nepal should no longer be confined to a reaction to how Nepal deals with China or how China deals with Nepal. As much as India, China is Nepal’s big reality.

India can help bury the bad memories of the blockade. One way of doing this could be by understanding the political realities of Nepal, by letting Nepal chart its course itself and diversify its trade and transit with other countries apart from India. The other way could be by expressing some remorse—some words of regret at least—for the suffering Nepalis were subjected to in 2015. Back in 2014, Modi had elicited immense admiration with one single speech. He ruined this image with few mistakes later on. Here is an opportunity for Modi to compensate for those damages. Dear Prime Minister, welcome to the land of the people ‘who have lived and died for India.’