In big win for Modi, Nitish Kumar teams up with his ruling BJP 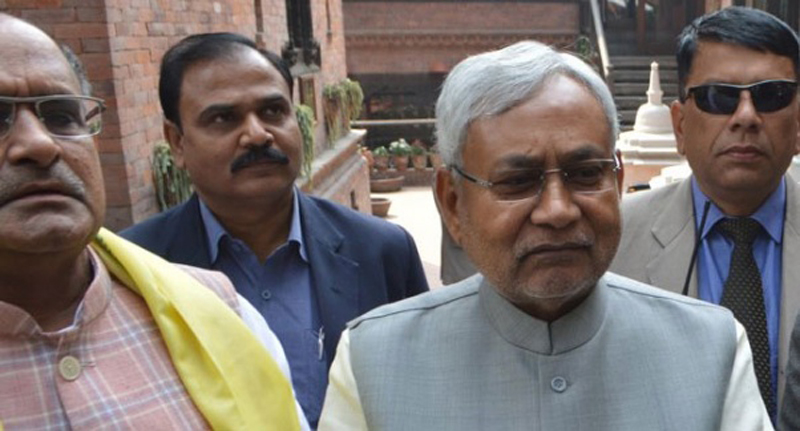 Kumar, once seen as a potential challenger in the 2019 general election, was sworn in as chief minister a day after quitting - ostensibly over a row with his coalition ally - and will govern with the BJP.

The sudden political realignment in Bihar, home to more than 100 million people, means that Modi's party now rules - either alone or in coalition - in 17 of India's 29 states, representing close to two thirds of India's 1.3 billion people.

Modi has led his party to a string of state election wins since he stormed to power in 2014, expanding the BJP's base across the northern heartlands and into the remote northeast, and cementing his claim to a second term.

"Modi's road to power in 2019 is smoother with Nitish on his side," said Sankarshan Thakur, an editor at The Telegraph newspaper and author of a book on Kumar.

What had been broken, he said, was not merely an alliance but an attempt at building a credible counter-narrative to Modi's "stunning grab on the national imagination" after 2014.

Bihar had been a rare blot on Modi's electoral record, after a three-party alliance led by Kumar handed the BJP a heavy defeat in late 2015.

Kumar's collapsed coalition, which included the once-mighty Congress party, held out the possibility that opposition leaders could form some sort of national bloc to fight Modi.

His return to the fold, having served as a minister in the last BJP-led government, underscores Modi's political dominance and tactical acumen in either defeating or co-opting his rivals.

Kumar's abrupt resignation on Wednesday followed a row with his coalition partner, Lalu Prasad Yadav, a charismatic and colourful former chief minister of Bihar who has previously been jailed for corruption.

The resignation centred on a disagreement around the role of Yadav's son as a regional minister, but some analysts said Kumar, 66, clearly saw a better political future by cutting his losses and aligning himself with Modi.

"The BJP has its strategy in place and the systematic assault on Lalu's family in corruption cases by federal agencies was not a coincidence. It was all well-timed and planned to ensure Nitish gets a smooth exit to join hands with the BJP," said Shekhar Gupta, founder and editor-in-chief of The Print.

Bhupender Yadav, BJP national general secretary, denied the BJP was to blame for any fallout between Lalu and Kumar.

"We are proud of the fact that the BJP has been successful in defeating the corrupt political party and will be able to serve the people of Bihar," he said.

Kumar, who broke with the BJP before the 2014 general election, had in recent months begun openly to support some of Modi's policies.

In contrast with other opponents, he had backed the prime minister's shock decision in November to ban high-denomination bank notes to fight "black money" and threw his weight behind Modi's recent choice for India's new president.

Following the resignation, Modi quickly praised Kumar for fighting corruption in one of India's poorest states. The prime minister said on Thursday that he was "looking forward to working together for Bihar's progress and prosperity".

Kumar's regional JDU party and Modi's BJP have enough seats to secure a narrow majority in the state legislature, although Yadav's party is the largest. Yadav said he had the right to form the next government and accused Kumar of "surrendering as per needs".

The BJP's Sushil Kumar Modi will serve as Kumar's deputy in the state.

Netizens remind Modi of 2015 blockade ahead of his visit

KATHMANDU, May 10:Social Media has been awash with messages against Modi for his Nepali visit.  There are so many hashtags... Read More...