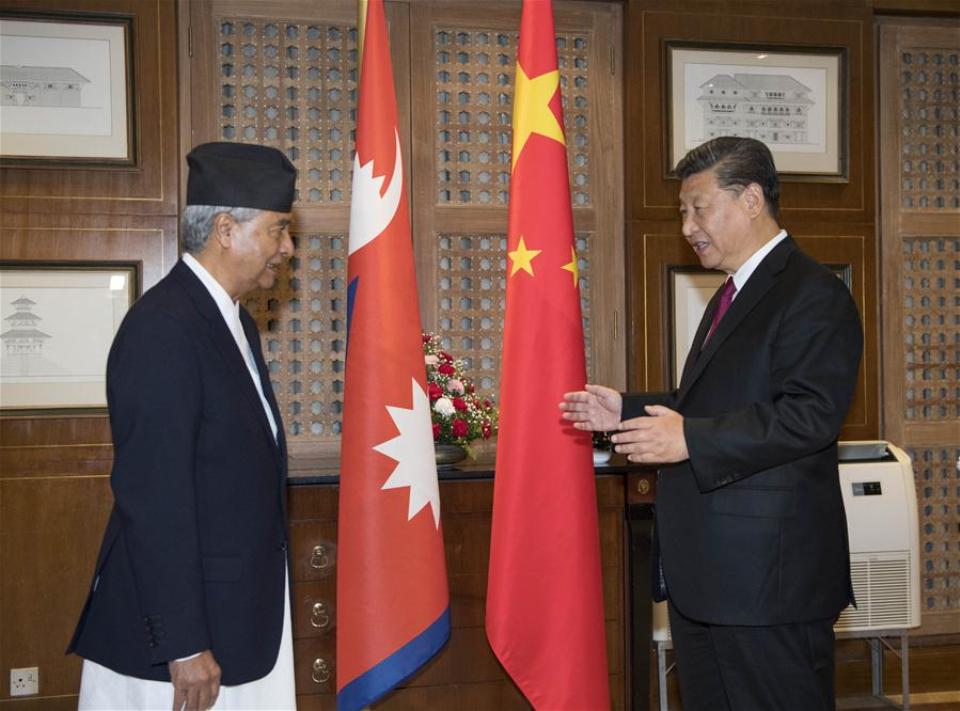 Some leaders are accusing China of land grab without verified and substantiated proof, while Nepali Congress leadership is pretending ignorance. What is it thinking?

On November 11, a Global Times article pointedly blamed the Nepali Congress for spreading the “rumors” that China has encroached on Nepali territory.  The article written by Hu Yuwei entitled “Who is behind fabricated reports provoking Nepal against China?” calls Nepali Congress “a pro-India force” and “the main institution behind the rumors.” It holds Congress lawmaker of Karnali Province Jeevan Bahadur Shahi as the main person who “initiated the accusation against China.”

In Kathmandu, many tend to dismiss Global Times reports outright. It’s a propaganda tool of the Chinese government, they say. Yes, it is. It exaggerates, even manufactures details, and uses high rhetoric to lash out at China’s opponents, they argue. Yes, it does. But here is something we must not lose sight of. It is the newspaper, also the mouthpiece of the Chinese Communist Party (CCP), which consistently defends China, Chinese policies and China’s position in the world. In that sense, it can also be called China’s channel to voice official concerns.

By the same token, it can be said Nepali Congress has been singled out by an official voice of the CCP.

It is hard to know how the writer of the article reached that conclusion. But if you follow the context at home, the story of China ‘encroaching on Nepali territory,’ the claim that has not been verified, was propagated by Congress leaders. I have written a great deal about this story in two of my earlier columns (see: “Fake news can destroy Nepal’s relations with India, China and the US” and “What’s the matter with China?”).  Influential Congress leader like Bimalendra Nidhi, who is also seen as the contender of party president in the upcoming general convention, was probably the first to draw the attention of the government and larger media and public over the report (which the government dismissed as ‘fake’) of encroachment that had made rounds in some Nepali press, including in Hamrakura.com (an online news portal headed by a journalist who is the general secretary of a journalist organization  affiliated to Nepali Congress) in June.

Back then, the news reports, based on the report of Survey Department of Ministry of Agriculture (which never existed and which does not exist) had made a comeback alleging that China has encroached on Nepali territories in as many as seven districts. Some Nepali Congress lawmakers quickly registered a motion in the parliament against the matter.

Now, the stories produced by citing dubious sources that started from little noticed outlets like Khabarhub and Hamrakura and later covered by bigger outlets like Kantipur and Annapurna Post have gone global. The story that ‘China is in land grab mission’ in Nepal—the story that has been denied by the government twice, refuted by the Chinese embassy in Kathmandu and Chinese foreign ministry officials and flatly rejected by local representatives on the ground—is everywhere around the world.

It’s a mainstream story in Indian media and beyond, including in The Epoch Times of the US and The Telegraph of the UK, all citing the reports the government has denied it ever published, and the same dubious resources and the same bunch of leaders from Nepali Congress.

From vice president Bimalendra Nidhi to spokesperson Bishwa Prakash Sharma to lawmaker Jeevan Bahadur Shahi, all have been claiming, rather insisting, that China has actually stolen Nepali territory (Shahi even challenging the Chinese government to prove him wrong).

A bunch of Nepal Student Union members also held a demonstration in front of the Chinese embassy over the matter in September.

While Jeevan Bahadur Shahi has been going about claiming that China grabbed our land, other lawmakers from that area have denied the allegations. In a recent interview with television journalist Tika Ram Yatri, both Chhakka Bahadur Lama, member of House of Representative in the federal parliament from Humla and Bishnu Bahadur Lama, the mayor of Namkha Rural Municipality, where the territories said to be encroached on by China lie, flatly dismissed the allegations.

The Lama duos claimed their observation on the field showed that China has not encroached on a single inch of Nepali territory and that the territory in question in Humla actually falls inside China. Shahi stands adamant. Curiously, the peddlers of encroachment story have now stopped talking about encroachment in Gorkha, Sindhupalchok and other districts.

A comprehensive investigative report in Himal asserted that 1961 agreement between China and Nepal, the border pillars erected in 1962 and the map made by task force of two countries in 1982 all point to the fact that the Lonjung area where China has constructed 11 buildings falls within the territory of China.

But Congress leaders (those named above) are insisting to the contrary.

Nepali Congress is one key actor which worked for reshaping and solidifying Nepal’s relations with China.  Yes, Congress had to take care of New Delhi’s concerns and proceed carefully but its founding father B P Koirala was the one to lay the brick on the foundation of Nepal-China relations.

BP Koirala is important name in Nepal-China relations also because he was instrumental in making the border agreement—the first such agreement to delineate borders between the two countries—possible, including resolving the matters related to Everest. The conversation BP had with Mao on these matters is often cited in Nepal.

Officially, Congress has advocated close and friendly relations with China.  The policies and programs endorsed by 13th General Convention of Nepali Congress describes India and China as “rising important and powerful nations of the 21st century” and states that Nepal should strengthen its ties with two neighbors on the basis of mutual understanding, cooperation and trust. The policy of Nepali Congress shall be to keep friendly, trustworthy, helpful and cooperative relation with neighboring countries (China and India), says the document.

It is a woe of Nepali politics that since 1950, it has somehow been erroneously established that Nepali Congress is a ‘pro-India, anti-China’ party and communist parties are ‘pro-China, anti-India’ formations. At times, the conducts of these parties have reinforced this categorization but this categorization is flawed and misleading because the country lying between China and India cannot afford to stand as a ‘foe’ to one and as a ‘friend’ to another. No political party in Nepal can afford to remain on unfriendly terms with either of the Asian juggernauts.

I remember what Dr Shekhar Koirala had told my colleague Kosh Raj Koirala and me  in April, 2019: “Nepali Congress has had smooth relation with China since the time of B P Koirala. Girija Prasad Koirala continued with that policy and we continue with it to this day. During my meeting with Chinese officials, I tell them that Nepali Congress and Chinese Communist Party should have a party-to-party relation.  This is important for us.”

He also sent a warning note about the trade war between the US and China. “America is in trade war with China… America is also indirectly advising Nepal not to fall into BRI debt trap. I worry that Nepal might fall into trap between China’s BRI and America’s Indo-Pacific strategy.”

That was a valid concern.

Some of the Nepali Congress leaders have been insisting on the ‘China has encroached Nepal’s land’ claim without being able to forward a verified substantiated proof. If Congress considers few evidence—the border agreement signed by its own founding father, the border pillars, and the map—it can be verified, if China has indeed encroached on our land.

Instead of doing that some of its leaders—including the vice president—are running after unverified and dubious reports and crying foul. Reportedly, Chinese Embassy in Kathmandu, through a letter, has taken strong exception to the version of encroachment story propagated by Jeevan Shahi.  Congress, according to this report, has condemned the Global Times article and taken the matter seriously. If this report is true, it feels like Nepali Congress and China have started the war of words over the matter the veracity of which has yet to be established. This controversy must not be dragged on any further.

Alarmingly, those considered as voices of reason within the party—Gagan Thapa, Dr Shekhar Koirala, Minendra Rijal (you may add more names)—are watching the accusations, counter-accusations, and what looks like a war of words, with silence while some of their colleagues are dragging the party into a controversy that could potentially jeopardize its legacy of good relations with China.

KATHMANDU, April 23: Although it is too early to predict if there will be rapprochement between India and China anytime soon,... Read More...