Commercial farming of turkey and ‘laukat’ begins in Jumla 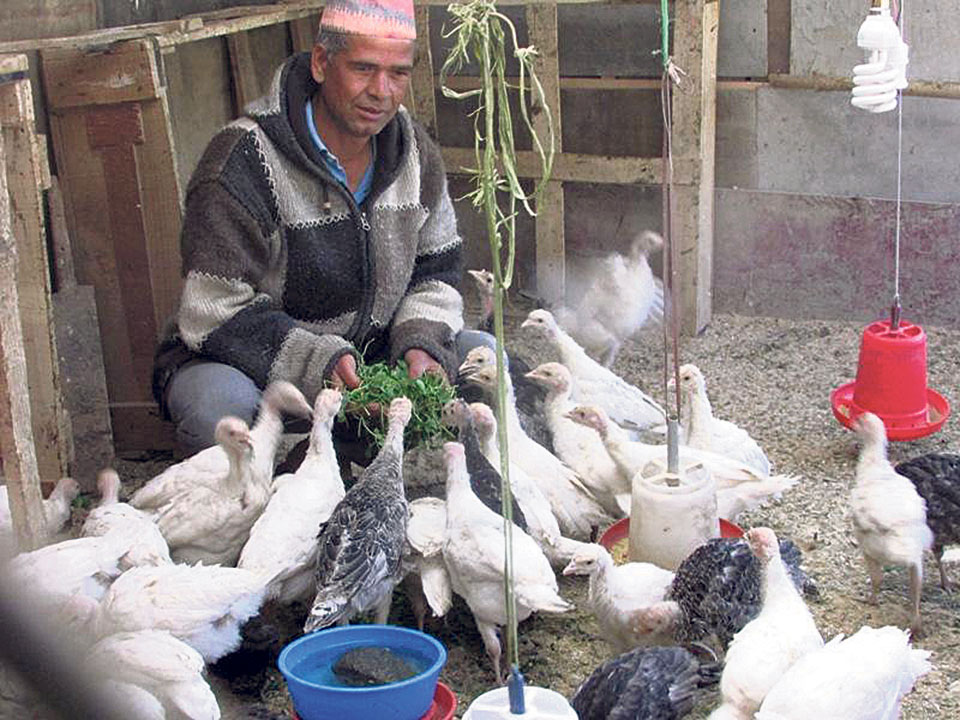 Narayan Chaulagain feeding local grass to birds in his farm.

JUMLA, April 21: Narayan Chaulagain, a local of Chandannath Municipality-4 in Jumla, has started commercial farming of turkey and laukat, an Australian bird. The two birds of foreign species are used for meat and eggs.

This is the first time anybody has taken the initiative to commercially rear foreign birds in the entire Karnali province. Chaulagain had brought chicks of turkey and laukat from Chitwan district.
Chaulagain, currently an employee of District Technical Office of Jumla, rears birds during free time at home. He said he started rearing the birds after coming to know that the climate of the municipality was suitable for such birds.

He first tested their adaptability in the district based on recommendation by researchers.
Each chick grows to become 8 to 12 kilograms in six months and is likely to fetch Rs 950 per kilogram in the local market, according to Chaulagain. The cost of each turkey chick is Rs 850, while the price of one chick of laukat is Rs 350.

Chaulagain had started rearing birds in the third week of March, after which, his farm, Lokmani Bahupanchi Palan Turkey Farm, has witnessed large number of visitors. The farm was established for commercial as well as research purposes.

“In the past, a Canadian citizen named Andrew had visited Jumla for his PhD study. He helped us understand turkey farming. One of his study areas was feasibility of rearing turkey,” said Chaulagain.

“But he did not return to the district failing to get his visa renewed. He had drawn me into rearing turkey, and I was expecting to learn more from him. But anyway, I have started doing it on my own,” Chaulagain recounted the story of some 15 years ago.

According to studies done by Nepal Agricultural Research Council, the climate of Jumla suits both birds.

Chaulagain, however, is not the first person to rear turkey in the district.

Chaulagain also said he does not have to worry about the grass and feed required for the birds as they can survive on the regular chicken feed and local grass.