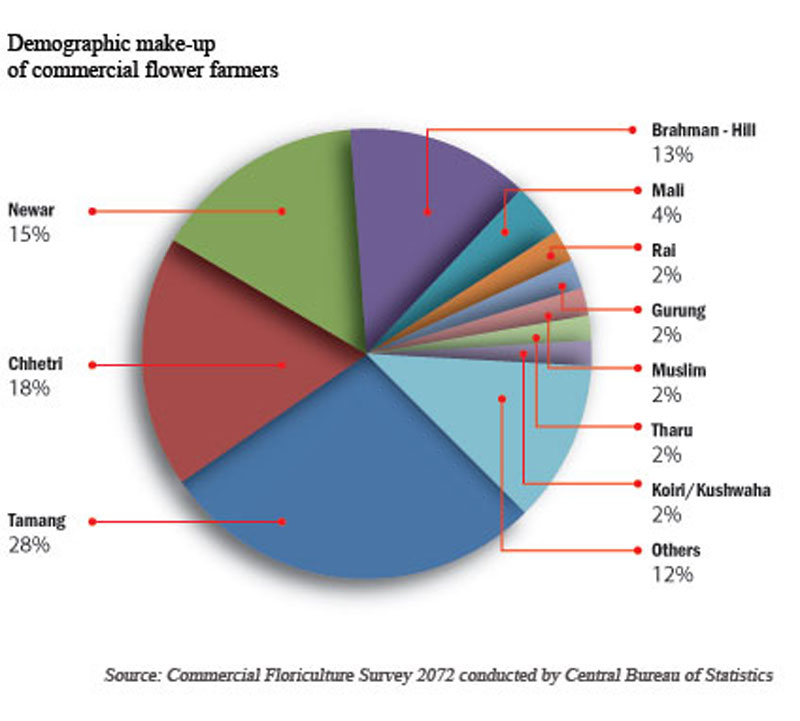 KATHMANDU, Oct 18: People from Tamang community lead commercial flower farming in the country as one in four commercial farmers come from this community, according to a survey.

A large number of Tamang people living in the foothills of the Kathmandu Valley produce flowers round the year and supply them to vendors in different temples in the Kathmandu Valley as well as hotels, according to a survey conducted by the Central Bureau of Statistics.  A total of 157 (27.9 percent) out of 561 commercial floriculture farmers that participated in the survey are from the Tamang community, according to Commercial Floriculture Survey 2072 unveiled by the apex statistical authority of the country two weeks ago.

Around 5.8 percent of the country's total population is Tamangs, according to census of 2011.

Badri Kumar Karki, director of CBS, said there is high concentration of commercial flower farmers in three wards of the then Ichangu Narayan VDC - now a part of Nagarjun Municipality. A total of 220 farmers, most of them from Tamang community, in the area produce loose flowers.

"Most of those Tamang farmers in the outskirts of Kathmandu Valley grow flowers round the year on land leased from others," Karki said, adding that they are making decent income.

The survey also shows that Tamangs are also the leading suppliers of dubo (Bermuda grass).

"They have been producing flowers with little investments as they bring saplings at a cheap cost from nurseries and sell flowers in the market within a few weeks," added Karki.

Only around 18.1 percent of commercial flower farmers are from the Chhetri community.

Around 16.6 percent of the country's population is Chhetris, according to the census.

Similarly, 15.3 percent and 13.2 percent of the flower farmers are from the Newar and Brahmin communities, respectively.

The first of its kind survey in the country revealed that the country produces flowers worth Rs 671 million annually. Marigold and dahlia accounts for around one-third of the total flower productions in the country.

According to the survey, commercial flower farming employs over 2,300 people. Similarly, it creates 72,400 man-days of temporary jobs.

The sector witnessed a significant boom between 2003 and 2013 as 299 of the respondents said that they ventured into the sector during the period.

The survey included commercial farmers producing different types of flowers in a minimum of 8 ana of land in hilly districts or 10 dhur in Tarai districts. A total of 561 farmers in 36 districts participated in the survey and mid-July of 2014 to mid-July of 2015 was the reference year of the study.

According to the study, Kathmandu, Lalitpur, Kaski, Bhaktapur and Morang are the leading producers of flowers.

The survey was carried out in collaboration with officials of the Floriculture Association of Nepal (FAN).

Commercial farming of turkey and ‘laukat’ begins in Jumla

JUMLA, April 21: Narayan Chaulagain, a local of Chandannath Municipality-4 in Jumla, has started commercial farming of turkey and laukat, an... Read More...

KHOTANG, Oct 25: Persons living with physical disabilities at Diktel Municipality in eastern hilly district are proving themselves that they... Read More...