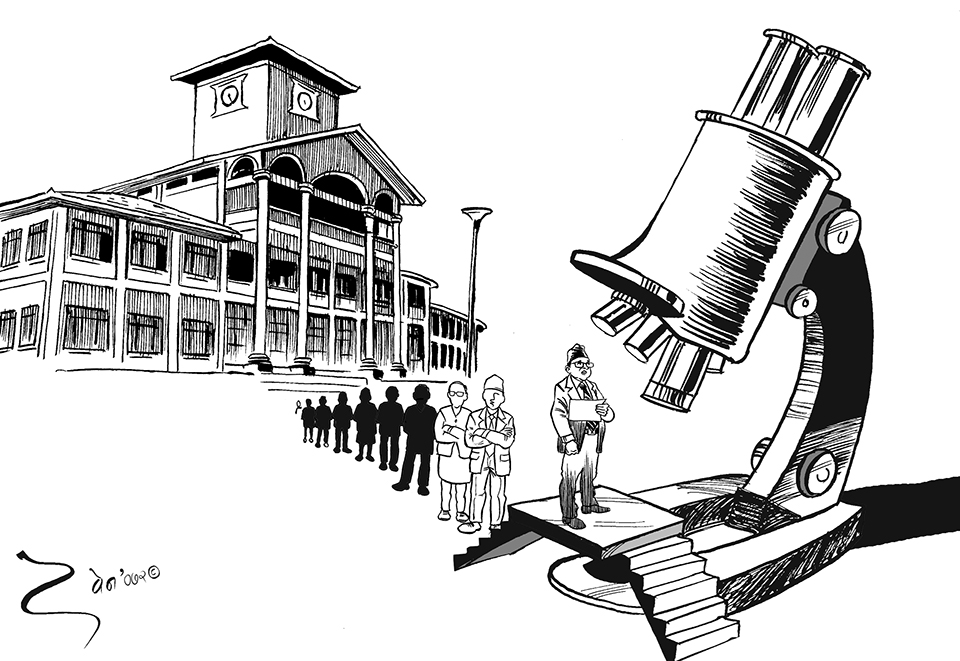 In my previous article, I argued that Tribhuvan University is intellectually dead (“TU is dead,” March 1). Many readers including professors, researchers, former high-ranking government officials, politicians and students commented on it. Some completely disagreed with my view, others partially agreed. They averred that TU is not completely dead. Yet others completely subscribed to my ideas.

Those commentators who argued that TU is not dead did not agree with me because they honestly but wrongly believe my argument is fraught with logical flaws. I call them “logically honest commentators”.  Others argued that TU is not dead not because they honestly believe so but because they believe, as Van Meter Ames did, philosophy is dynamite capable of dismantling the existing order of things. Let me call them “logically dishonest commentators.”  Some of these commentators committed what logicians call “the ad hominem fallacy.” They attacked my circumstance rather than argument.

Logically honest commentators reminded me of comments made on the argument of Francis Fukuyama’s The End of History? (1989). These critics were of the view that history never ends since events never stop occurring. Their comments proved to be glib ones because what they meant by history was not what Fukuyama meant. He had used the term “history” in the sense of the ideological history not as events that occur in human society. He had used the phrase “the end of history” to refer to the fact that liberal democracy represents the last point in ideological history.

Just as some commentators attacked Fukuyama’s argument without trying to understand what he meant by “history”, the logically honest commentators criticized my argument without trying to know what I meant by “intellectual death”. Since the essence of argument I made in my previous article is based on notion of “intellectual death”, it is necessary to elaborate the concept here.

Honestly, these comments were not logically convincing.  I think, as John Maynard Keynes did, we do not understand very simple ideas when we refuse to escape from “habitual modes of thought”. In The General Theory of Employment, Interest and Money, he wrote: “The difficulty lies, not in the new ideas, but in escaping from the old ones, which ramify, for those brought up as most of us have been, into every corner of our minds”.

The first, fourth and fifth comments are derived from the observation that there are also ideal professors in TU. This observation, which I share, has nothing to do with the logical validity of my argument. As stated above, intellectual engine of a university is propelled by the force created by the concerted effort made by all university teachers to set in motion the broader process leading to dissemination of minimum critical knowledge and production of new knowledge. The serious intellectual effort made by few ideal professors is not enough to produce the force strong enough to propel intellectual engine of a university.

Universities differ in terms of minimum critical knowledge to be disseminated and minimum new knowledge to be generated since these minimum amounts are determined by various factors such as average intelligence, nature of faculty selection process, incentive for critical thinking, research funds etc. TU lags behind the western institutions on these fronts. My argument is not that TU is dead because its professors do not teach knowledge as much as its western counterparts do or they do not generate new knowledge as much as their western counterparts do.

The sixth comment falls outside the scope of my argument. It does not follow from my claim on TU’s intellectual demise that other universities in Nepal are intellectually alive, or intellectually dead.

The logically honest commentators of my previous article rushed headlong into glib comments without trying to understand the assumption my argument is based on. They seem to be unaware of the fundamental fact in the science of reasoning that every argument is based on a particular assumption, which is either explicitly stated or indirectly implied.

The author is a visiting faculty at Central Department of Rural Development, TU

Why Nepal is still in transition

Despite empowering the downtrodden, Maoist movement in essence facilitated larger section of society to get co-opted in conservative politics ... Read More...