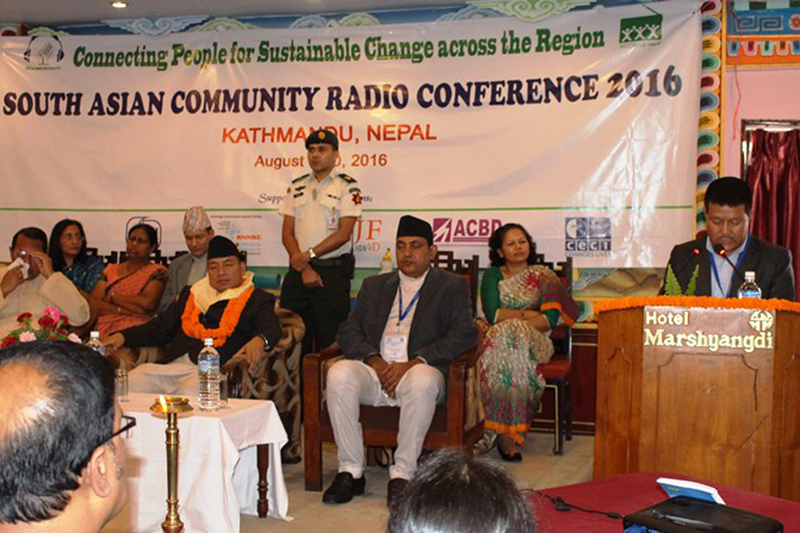 'Connecting people for sustainable change across the region' is the theme of the conference organized by the Association of Community Radio Broadcaster (ACORAB) Nepal.

In his inaugural speech, the Vice President said, "The community radios are the voices of people," praising their role in connecting the center with the rural and other communities.
Wishing for the success of the conference, he said he felt happy to see the participants of the conference were the activists of community radio of South Asian countries.

Community radios had a remarkable contribution to establishing the republic in Nepal, he said, drawing the government attention to render full support to their promotion. "The focus of community radio is to provide the accurate and credible news to rural communities."

The Vice President said the enforcement of the constitution and the successful completion of the post-earthquake rebuilding drive were the main agenda of the hour, calling on the community radios to play a supportive role towards that end.

He expressed his confidence that the conference would help expand the mutual ties existing among the South Asian countries to people's level and further consolidate them.

Giving his welcome speech on the occasion, Acorab Chair Mohan Chapagain said the conference had opened a door for mutual cooperation among the community radio in the region. It was a matter of happiness that Nepal was hosting this type of conference for the first time in the entire South Asia.

World Association of Community Radio Broadcasters (AMARC) Nepal co-chair Min Bahadur Shahi expressed his hope that the conference would prove a milestone in terms of development and promotion of community radios.

National Information Commission Chief Krishnahari Baskota said. "This is an era of information and information is power. The community radios are playing a significant role in protecting individual's right to information."

Bangladesh' Minister for Information Hasanul Haq Inu said community radio remained as a pride of particular community in many countries. The importance of community radio in the South Region was high as it could ensure equality and development.

He stressed that role of community radio was always important for poverty alleviation and sustainable development.

The conference will conclude tomorrow by issuing the Kathmandu Declaration. RSS

KATHMANDU, March 29: Vice President Nanda Bahadur Pun has said the investment-friendly environment was created in the country with the... Read More...

I have told Deuba that I will become the first PM of the new government: Dahal
10 hours ago

Rumors that Unified Socialist party is uniting with Maoist center is baseless: Dr Bhusal
17 minutes ago

Man beaten to death in Dhanusha
2 hours ago