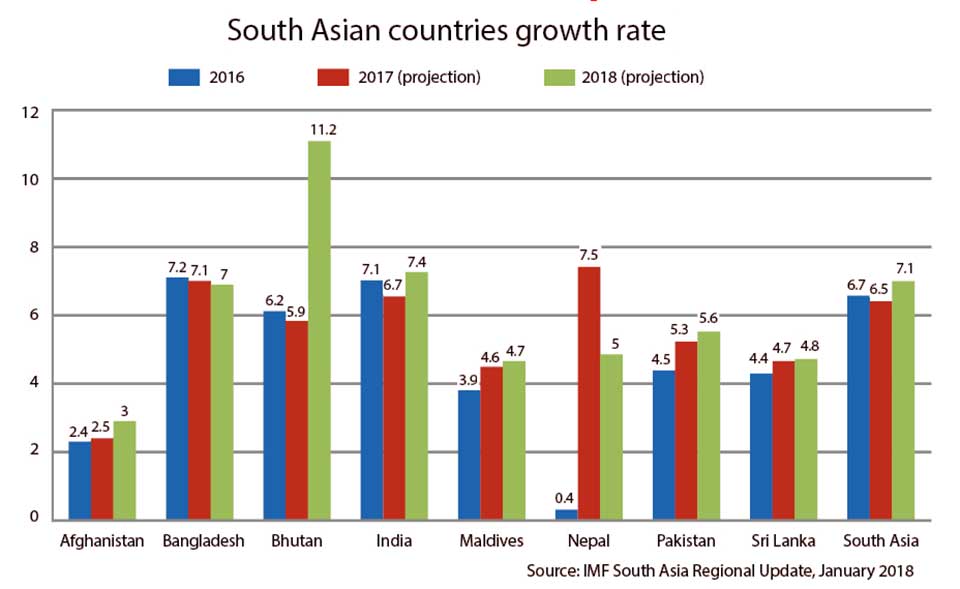 KATHMANDU, Jan 21: The International Monetary Fund (IMF) has said that growth is expected to accelerate or remain broadly stable in South Asia except Nepal.

Releasing the South Asia Regional Update entitled ‘South Asia: The Robust Outlook Continues’ on Friday, the Fund, headquartered in Washington DC, said that Nepal’s growth is projected to moderate at 5 percent in the current Fiscal Year 2017/18, after the real GDP growth climbing up to 7.5 percent in 2016/17.

The rebound in the last fiscal year was supported by a good monsoon, accommodative monetary policy, and rising government spending.

“Nepal’s economic cycle has been de-linked from the region because of earthquake and trade disruptions. As a result of the subsequent cyclical recovery, its economic growth accelerated the most in the region and achieved the highest growth rate in 2017,” Andreas Bauer, senior resident representative of the IMF to Nepal, told Republica in an email.

“After such a sharp cyclical recovery, it is to be expected that growth will slow somewhat and converge back to the potential rate, which is lower than the growth rate achieved in 2017.”  Not only has IMF rendered Nepal an ‘exception’ to the robust outlook of growth in South Asia, it has also pointed out a challenge to ‘avoid falling back to the relatively low average growth of about 4 percent per annum’.

The IMF projection, although considered conservative, is a shot in the arm to the government whose economic target of 7.2 percent was belied by the World Bank and Asian Development Bank (ADB) who projected 4.6 and 4.7 percent economic growth for Nepal, respectively.

“Fiscal policy should focus on higher and better-quality public investment and prudent implementation of fiscal decentralization through sustainable inter-governmental fiscal arrangements and the need to build public financial management capacity at the sub-national level,” read the report. It has also warned that the hasty implementation of fiscal decentralization could strain government finances and weaken fiscal policy’s stabilization function.

In South Asia, growth is expected to accelerate to 7.1 percent in aggregate in 2018, reflecting continued strong consumption and investment, supported by favorable financial conditions and improving external demand, according to the IMF.

Nepal ahead of other South Asian countries in budget transparency list