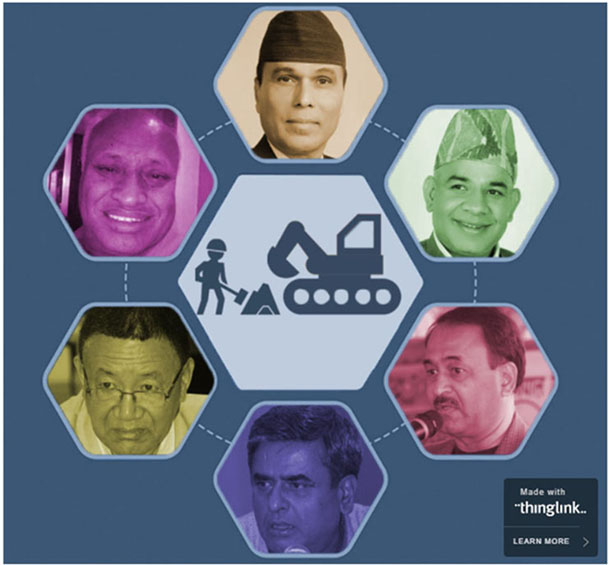 In Nepal, half a dozen contractors exercise monopoly over construction contracts. The cartel holds sway over entire construction administration and political sector. They huddle together before bidding for large infrastructure projects.  A report by Public Procurement Monitoring Office under Prime Minister's Office has exposed their workings.

KATHMANDU, Jan 15: Any contractor working in Nepal should have been qualified to bid for the 65-kilometre Mugu-Humla road construction. But when the tender bid for the construction was solicitated, a criterion was added saying that the bidder must have international experience in the last ten years, with the intention to limit the competition so that only a few contractors including Kalika Construction could participate in the bid.

Bikram Pande, Minister for Forests and Land Reforms, is the owner of Kalika Construction. The criterion was later removed after the Federation of Contractor's Association, Nepal (FCAN) urged Rural Access Programme Office Lalitpur, the implementing agency, for correction to allow fair competition, but the tender bid was cancelled a few weeks ago without giving any reason.

At a parliamentary committee meeting of stakeholders in August 2014, lawmakers agreed to set a threshold of Rs 600 million rupees for foreign companies looking to bid for infrastructure projects in Nepal. Meanwhile, contractors organized a five-day trip for seven lawmakers including Prakash Jwala, CP Mainali, Gopal Dahit, Janardan Dhakal, Jagadish Narsingh KC, Ratna Sherchan, Sher Bahadur Tamang and six parliamentary officials to Singapore and Malaysia. The trip cost Rs 2.5 million, half of which was drawn from a fund collected from each contract awarded to the contractors for their capacity-building.  The lawmakers particpated in the FCAN-sponsered junket without informing the parliamentary committee, but a parliamentary Finance Committee report said the lawmakers held discussions with Malaysian finance ministry officials on procurement process.

The real motive behind organizing the excursion was to influence lawmakers to raise the threshold for international contractors bidding in Nepal to Rs 1 billion. All this happened while the amendment to the Public Procurement Act 2007 was pending in parliament.

Indeed, they scored victory right after the trip. According to the Public Procurement Act 2007 (first amendment 2016), international companies are barred from bidding for projects of less than Rs 1 billion. The new rules ensured big Nepali contractors have monopoly over contracts ranging from Rs 700 million to Rs 1 billion because small and medium-scale contractors lack experience to bid for big projects.

Before publication of any tender notice, big contractors meet with officials of the Department of Building, Department of Irrigation and Department of Roads and persuade them to create a package of contracts with total amount of more than Rs 700 million. This makes only a handful of contractors eligible for the bidding. This also violates the Public Procurement Act.

After the deal, the contractors divide civil works among themselves. The contractor who is receiving the contract proposes a cost one percent less than the estimated cost. In order to show it was a competitive bidding, another contractor of the group proposes a slightly higher cost. As a result, one of the group members wins the contract. "Tender notice is issued only for formality. They know which company is going to win the contract"" an official of FCAN said on condition of anonymity. "In the last two years, about Rs 55 billion worth of contracts have been handed in that way."

While collusions like these have made a mockery of the Public Procurement Act and its regulations, its primary beneficiaries include a handful of contractors. Because big contractors don't have to bid for projects, they win contracts at maximum prices. Lack of bidding for projects allows them to make up to 25 percent in profit. They use these profits to influence politicians and government officials.

Dozens of infrastructure projects in the tarai as well as Mid-Hill Highway have already been awarded to big contractors without following competitive bidding process. In total, they have won an estimated Rs 55 billion worth of contracts. The losses to the government from these projects range from Rs 8 billion (15 percent of the estimated cost of the project) to Rs 14 billion (25 percent). Had the contractors gone through competitive bidding as outlined in the Procurement Act, the state would have earned billions of rupees. Instead, the big contractors have pocketed the money.

According to a former official of FCAN, smaller contractors subcontract work from the big ones. The big contractors, in turn, draw up to 10 percent commission even without any work.

In its latest annual report of 2074, the Public Procurement Monitoring Office (PPMO) has acknowledged that such collusion prevented competitive bidding. ""In the last few years, against the fundamental principles of law, procurement policies have been modified so that only certain companies can bid for tender without any competition or by limiting competition"" (page 31 of the annual report of 2074) The report details how collusion affected more than Rs 25 billion worth of road projects.

The report was submitted to Prime Minister Sher Bahadur Deuba in August by Binod KC, the secretary of PPMO. "The tendency of proposing big project packages by merging smaller projects with the intention to limit the competition during bidding has increased," the report said. "This has a number of implications: misuse of public funds, contracts are awarded to a handful of contractors, which causes delays in project completion."

Contractors have come forward and exposed corruption plaguing the sector. "Small tenders are merged into big ones worth Rs 800-900 million," said Yaksya Dhwaj Karki, former president of FCAN and proprietor of Sky Builders Pvt Ltd. The recent contract of Rs 10 billion Postal Highway, according to him, was one such example.

"We have become helpless in the face of such collusion. The bidding criteria for the recent tender of Mid Hill Highway were set in such a way that only big contractors were eligible. Their complaint to PPMO fell on deaf ears.

Ramesh Sharma, a former secretary of PPMO said the 1 billion threshold was introduced to protect Nepali contractors and to allow 500 active contractors to participate in the bids. "If the cost bid by the contractor is on par with estimated cost and if this is limiting competition, the provision must be revoked," he said.

At present big contractors are working hand in glove with the officials of the Department of Urban Development and Building Construction and Department of Roads to package multiple contracts as per their needs. They pay bribes to officials in exchange for contracts ranging from Rs 700 million to Rs 1 billion. This packaging of multiple contracts into one ensures that only half a dozen big contractors are eligible for the bidding.

These contractors are so powerful that they can easily influence the prime minister, ministers and politicians. In April 2016, they persuaded Minister for Physical Infrastructure Bijay Kumar Gachchhadar to divide the 318-kilometre Hetauda-Chatara Highway into two contracts. A similar package was created for bridges along the highway, which went against normal practice. Then, the all-powerful contractors handed the Galchhi-Mailung Syafrubeshi road project to their associates. The cabinet meeting took the decision to award contracts to foreign firms with Nepali joint ventures. Madhav Karki, the director general of the Department of Roads, added a provision that required 25 percent investment of Nepali companies in such joint ventures.

As a result, only the aforementioned six contractors were eligible for bidding.

The six contractors won contracts for all five projects including three road package and two bridge package. The government report has exposed this. The latest report by PPMO said: "A total of 11 firms including nine Nepali and 3 foreign competed in the tender process. All 11 firms received contracts in one way or the other. The contract amount is only one percent less than project's estimated cost. Only one firm has proposed less than the project's estimated cost in each package. All four bidders were awarded contracts."

After reviewing five contracts, the report concluded: "The fact that among all the tenders only one had proposed cost higher than the project's estimated cost, the contract amount and project's estimate cost were almost equal, certain firms were repeated and all bidders ended up getting some contracts shows that this was not a coincidence but a deliberate manipulation."

After learning about the collusion, PPMO on July 5, 2016 urged Department of Roads and the Ministry to stop the process, but it didn't receive any response. Despite being well aware of the collusion, the PPMO under the Prime Minister's Office let it go ahead.

Under the Public Procurement Act, it results in the offending contractor being blacklisted for 1 to 3 years and cancellation of the contract. Surya Nath Upadhyay, a former chief commissioner of the Commission for the Investigation of Abuse of Authority (CIAA), said, "To bundle contracts to suit certain contractors and collusion in procurement is 100 percent corruption. The CIAA should investigate these cases and file charges of corruption against contractors and officials involved."

Trampling on criteria for bidding

On September 12, 2017, government published a tender notice for 12 packages of the eastern section of Mid Hill Highway. According to the Standard Bidding Document, any bidder with experience in earthen works that was 80 percent of estimated cost would be qualified. But the criterion was modified to say 100 percent of the estimated cost, which limited the competition. It required contactors to have such experience in one year, whereas an accumulated experience gained over several years would have qualified them for the contract. After an FCAN delegation met with Satyendra Shakya, the head of the project, Shakya told them he had included the provision following a circular from his department.

The transfer of secretary of PPMO illustrates the kind of power the big six contractors exercise. While PPMO secretary Binod KC agreed to amend the provision, two days later, he was transferred to the Ministry of Defense, according to Karki, a former president of FCAN. Then his successor at the PPMO didn't want to follow up on his predecessor's decision."

In another instance, the head of Postal Highway project, Balaram Mishra, who went against the contractors' suggestions, was transferred to the Department of Roads. On August 16, 2017, he issued a tender notice for 12 projects of over Rs 10 billion in Province 2. He was transferred in less than a week. Most of those contracts were awarded to the six contractors.

Three years ago, contracts for a 29 kilometre section of East-West Railway were awarded after 'matchfixing' by limiting the competition among a handful of contractors. The CIAA began investigating Ananta Acharya, the director general of the Department of Railway, for suspected collusion in the evaluation of the bids. But soon after, the CIAA put the case on hold, allowing the project to move forward.

Two years ago, CIAA had also initiated an investigation into collision at the western section of the Mid Hill Highway and Dharan-Chatara and Galchhi-Syafrubesi road. The CIAA summoned secretaries and questioned them. But until now CIAA hasn't filed cases against any of the big contractors.

This shows that the big six contractors can influence even the anti-graft body. When asked about the corruption related to these projects, Bishnu Prasad Pokharel, a spokesman at the CIAA, said he couldn't talk about it since it was under investigation. After repeated requests, he excused by saying he would have to consult the investigating office. He has not been available to comment since then.

The story was prepared in collaboration with Center for Investigative Journalism.

Govt officials draw flak for their inaction against unruly contractors

KATHMANDU, Feb 1: Lawmakers have criticized the Department of Roads (DoR) for its failure to take any action against contractors of... Read More...

We have not offered anyone to become PM: Oli
19 hours ago