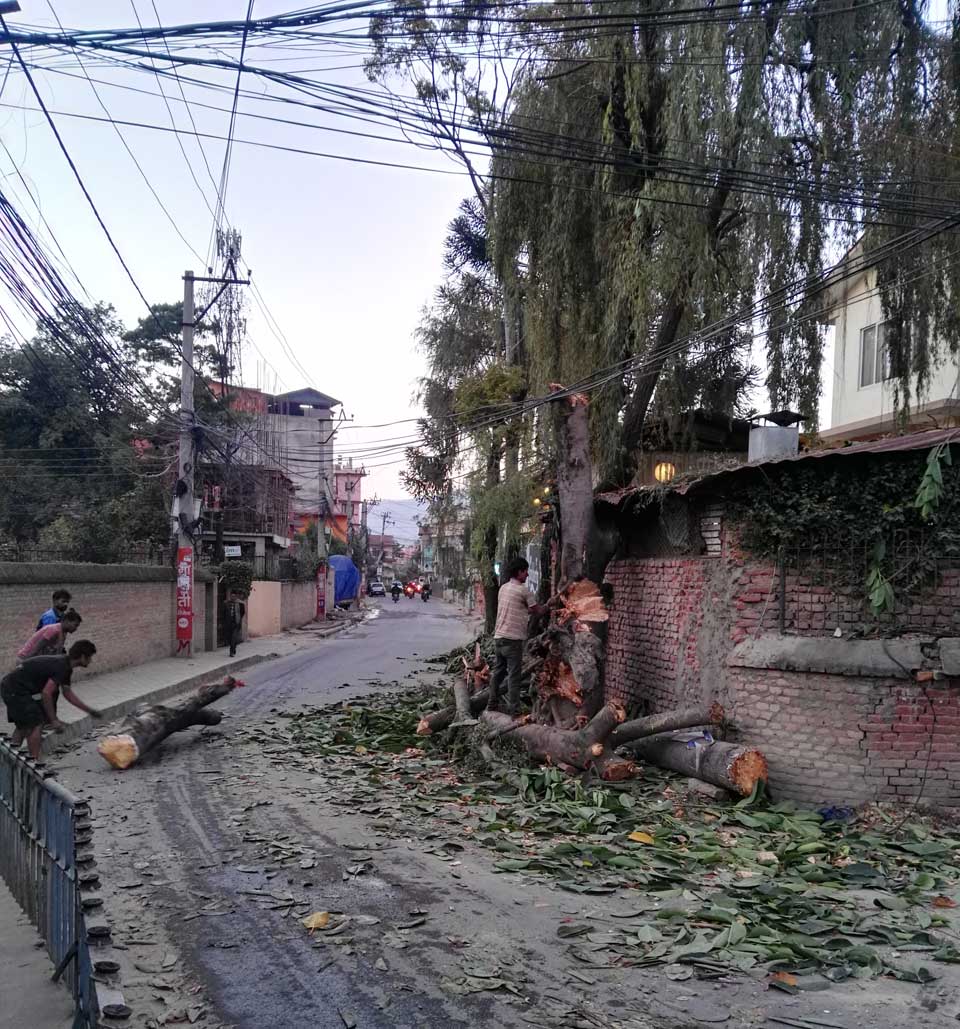 With pride in things that it had no role in building and prejudice against Madhesis, Janjatis and Dalits, constitutionally-created ‘Khas-Aryas’ prefer to wallow in cesspool of its own excretion.

The most powerful dotard in the world isn’t too well known for his political correctness. He has hit the headlines once again for calling a couple of Third World countries cesspits in the language of an ignorant bully on the block. The Nepali Trumpards discovered to their horror that their self-described land of Never Ending Peace and Love too was on the obnoxious list.

The proud pundits seem to have chosen strategic silence to hide their vulnerability. Though notorious for their intolerance and infamous for using vile language, none of the Oliologists of the ruling Oli-garchy have as yet taken the initiative of hitting back at the most ridiculed person in the world in kind. Imagine the outcry if even a much milder moniker had emanated from the Indian Prime Minister Narendra Modi!

Perhaps Oliological responses would have been equally muted if the Chinese Supremo had hurled similar insults. The PEON instinctively knows when discretion is the better part of valor. The shrewdness antenna of the Oliologists is extremely sharp in detecting signals that wouldn’t tolerate its reprehensible retorts. In any case, the Brandolini’s Law states that the amount of energy needed to refute bullshit is an order of magnitude bigger than to produce it. Despite their pretentiousness, the Oliologists are in fact weak in fighting spirit.

The chattering classes of Kathmandu are equally quiet. Frequent users of the so-called social media, which is completely asocial and avowedly amoral, too have been rather too careful in criticizing the damning indictment of the land of brave Gorkhalis. Perhaps they don’t want to risk being denied the permission to land in the land of their dreams once they happen to win the DV lottery!

Since English is the national language of Botswana, its foreign ministry needed no translators to understand diplomatic implications of the undiplomatic characterization. It immediately summoned the US envoy in Gaborone for a clarification. Even though the Prime Minister’s desk in Singh Durbar is regularly replenished with fresh editions of multiple dictionaries, nobody seems to have had the time to look up the trending ‘S’ word as yet.

Scatological implications of the callous epithet are meaningful. There are reasons to believe that the Tweet-addict hurler of intemperate remarks may not be too far off the mark, at least in the case of Nepal. The country is indeed turning into a cesspit, even though of a bewitchingly beautiful kind.

Vanity mirror
Kathmandu resembles a valley of despair in many ways. Enchanting views of Himalayan peaks on a clear day notwithstanding, an international visitor disembarking at the Tribhuvan International Airport for the first time is struck by the foul smell of the vehicle exhaust mixed with stink emanating from malodorous flow of Bagmati waters nearby. Little wonder, some tourist agencies in the East Asia advise their customers to use a filtered mask throughout their stay in any city or town of the country and take it off only in uninhabited areas of hills and plains.

For the uninitiated, to Melamchi is a verb in Nepanglish, the colloquial English of Kathmandu cafes, which means digging up a road to lay down pipes and leave it unattended for months together. It’s not just Kathmandu, roads in almost all major settlements of Nepal remain Melamchied and thick dust is the defining feature of the urban landscape. If an emblematic motif were to be chosen for the city-life in Nepal, it will undoubtedly be a cotton mask that enlightened citizens instinctively put up over their nose and mouth as soon as they step out of their house. Most such cotton pieces do little to filter the air one breaths. But illusions are important to survive under conditions of helplessness.

If the air is foul, land is no better. Other than three months of summer monsoons, it takes some effort to identify a patch of grass, let alone greenery, in most part of the capital city. From the plastics in solid waste dumps on street corners, it would appear that per capita consumption of packaged junk such as the ready-to-eat noodles, potato chips, rice crisps and excessively sweet biscuits in Nepal is highest in entire South Asia. Kathmandu undoubtedly uses thinnest imaginable plastic bags of myriad colors. The ratio of public open space per thousand of population in Nepali towns must be one of the lowest in the world.

Despite mighty rivers thundering down into the plains, availability of potable water in the country is extremely low. Thousands of water tankers bring in millions of liters of the precious liquid into the city everyday, which are then stored into mostly unhygienic underground tanks and are pumped up overhead to flush modern toilets boasting of American fixtures, Italian marble floors and walls covered with ceramic tiles imported from China. Even the poor have to rely upon drinking water bought in plastic jars that eat up a huge portion of their daily earning. Unashamed of its inability to supply clean water, the government routinely advises its citizens to boil the fluid before consuming.

Once upon a time not too long ago, Nepal was an exporter of grains, timber and dairy products. It’s not so anymore. It’s not just rice—the staple food of most Nepalis—but also beans, vegetables and fruits that have to be imported to meet local demand. Much-hyped hydroelectric potential being pointless, the country is almost wholly dependent upon imported energy including most of electricity supplied through the national grid.

The public education system has almost collapsed while for-profit schooling continues to flourish. From the friendly neighborhood pharmacist to the pricey private hospitals, the illness industry is completely in the grips of the profit sector. Together with banking, building, brokering and bureaucracy, education and health are the six most profitable ‘businesses’ in the country which the government has neither the ability nor the intention of regulating. All of it is financed from two of the most dubious sources of earning—remittances and smuggling. Often the two are interrelated as under-invoiced imports are paid for in foreign currency repatriated through unofficial channels.

Shame is said to be a debilitating emotion but it can also be a powerful force of change for those that care to retrospect and reform. But that’s something that no Nepali is ever willing to do. With pride in things that it had no role in building (the Himalayas, the Valley of Pokhara and the birthplace of Lord Buddha) and prejudice against the Madhesis, the Janjatis and the Dalits, the constitutionally-created ethnicity of Khas-Aryas prefer to wallow in the cesspool of its own excretion. It looks into the vanity mirror and exclaims: Look, how beautiful we are!

The dotard wasn’t politically correct, but how else does one define a country where people hold protest rallies to obtain resident permits under DV lottery schemes and are ready to sell their entire property to pay human traffickers for an opportunity to escape from their homeland? It’s a shame that the intelligentsia in Nepal hasn’t taken the cesspit remark with the seriousness that it deserved. The scorned that doesn’t take insults to the heart and determines to improve its lot is destined to keep receiving similar slurs forever.

Mediocre minds
Root of ‘mediocrity’ is traced to the Latin term for middle mountains, which must have been somewhat like the Mahabharat Ranges, where survival was rough but not as tough as in the Himalayas and life was easy but not as uncomplicated as in the Madhes. The in-between condition of living is ideal for vacillating between the two extremes of fighting ferociously and withdrawing into complacency. The middle course is but only a fleeting moment for most mediocre minds.

The Nepali Congress fought for over three decades in the name of democratic socialism but embraced the dogma of free-market fundamentalism at the very first opportunity. The Marxist-Leninists of UML variety have always been culturally conservative that talked left and walked right, but their transformation into the alt-right of the post-truth world with openly chauvinistic position is a shocking descend into the cesspool of mediocrity. Maoism once meant struggle, now it stands for abject surrender.

Trumpwashing apart, as Karen Attiah writes in The Washington Post, the US media has long treated black and brown countries like “shitholes.” Pride is good, but only when it’s backed by the determination to emerge out of shame with one’s own effort.

Nepali media outlets have contributed a great deal in safeguarding freedom and democracy and have consistently served as voice of... Read More...

The National Human Rights Commission (NHRC) is perfectly justified to seek stern action against the officials of Nepali Police and... Read More...

Attorneys to be selective in defending decisions of state agencies

KATHMANDU, Dec 26: The first convention of the government attorneys concluded on Sunday stating that the attorneys could be selective in... Read More...

Two arrested for raping and murdering a minor
5 hours ago