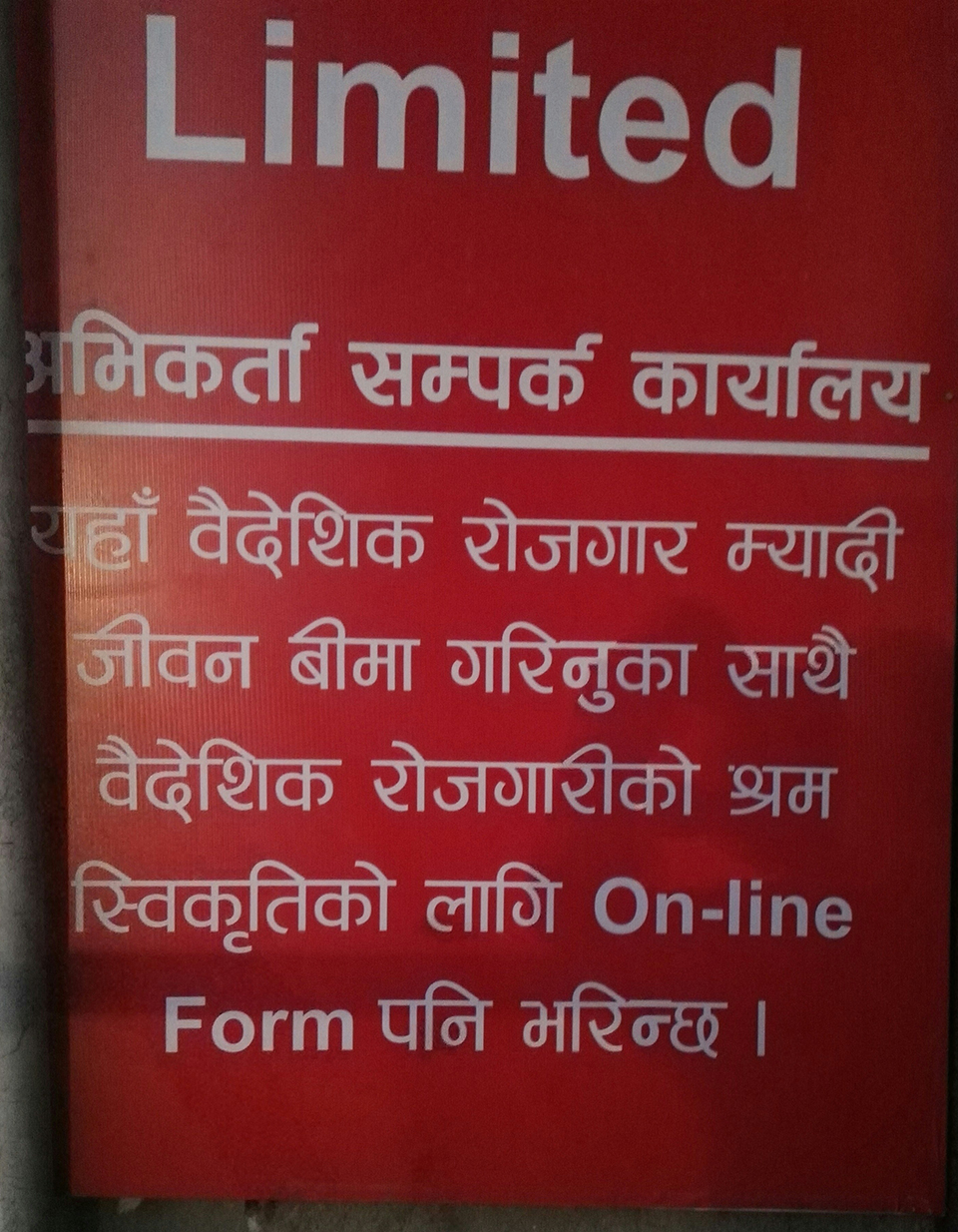 With the first letter capitalized, ‘Covfefe’ can perhaps be considered a Beckettian noun as in the ‘Theatre of the Absurd’ signifying things that happen when nothing actually happens. In the lower case, it’s an adjective with a meaning similar to that of the term ‘absurd’ referring to statements that are wildly unreasonable, highly illogical or plain preposterous.

In the context of Nepal, covfefe refers to all Oliological arguments that are neither logical nor illogical; but are doggedly obdurate, stubbornly bigoted, spiritedly jingoistic, determinedly prejudiced, indomitably chauvinistic, and unswervingly xenophobic in tone, tenor and intent. That’s too many adjectives for a paragraph, but prosaic license for a covfefe piece at the end of the Year of the Absurd need to be editorially permitted!
Nobody other than the oldest first-term president in US history could have come up with a term as apt as covfefe for self-description. Pity that the Oxford Dictionaries opted for youthquake, meaning ‘a significant cultural, political or social change arising from actions or influence of young people’, as word of the year.

Perhaps custodians of the English language are still hoping that the 75 percent of 18- to 24-year-olds who voted to remain in the European Union can overturn Brexit with a youthquake. But as Prime Minister Theresa May has begun to realize, Brexit was clearly a covfefe decision of the electorate driven by fear and insecurity rather than hope and confidence. Even though hope reigns supreme in the heart, it’s mostly fear that forces the mind to take defensive decisions.

Year of absurdities in Nepal began in January with the-then Prime Minister Pushpa Kamal Dahal tabling the constitutional amendment bill in the parliament despite obstructions of the main opposition Communist Party of Nepal (United Marxist-Leninist) in bad faith. The UML Chieftain Khadga Prasad Sharma Oli had probably briefed his political suitor to go with the charade in full knowledge that the proposal was sure to fail.

March was the month of mayhem in Madhes where belligerent UML cadres and trigger-happy security personnel were squarely responsible for the shooting of at least five protestors in Saptari alone. In mid-April, Madhesi lawmakers and leaders of Nepali Congress from Province-2 suggested that the party take the United Democratic Madheshi Front on board before going for elections.

The elected Treasurer of NC and an influential leader of national stature in her own right, Sita Devi Yadav told that it will be better to drop a bomb upon Madhesi lawmakers of the party than hold elections without constitutional amendments. Party President Sher Bahadur Deuba obliged her a little later when he announced elections as the Prime Minister of the country—the bomb was named parliamentary and provincial polls. The NC has almost been decimated in its Madhes stronghold.

When Premier Deuba was elected to head the government in June, it was clear that his job was to complete the process that had been initiated by his predecessor in the party with the signing of 16-Point Conspiracy in June, 2015 that accepted the primacy of Oliological position in the politics of the country. Expectedly, the UML precipitated the failure of the constitutional amendment bill on the floor of the House. Premier Deuba failed to get the hint and proceeded full steam ahead to the polls that would soon ensure his political doom.

In the beginning of October, the Marxist-Leninists of Chieftain Oli and the Maoists of Supremo Dahal sealed a political deal to go to the provincial and parliamentary polls together. Ever since, nothing else has happened in the country. With that decision, the so-called Left Alliance received the full backing of the PEON, the governance went on the autopilot mode, and cloud intelligence took over decision-making.

According to the Foundation for Electoral Systems, an important source of cloud intelligence, the Election Commission had seconded 272,000 security personnel from the Police and the Armed Police Force including 98,000 temporary recruits. The Nepal Army was on standby whenever not mobilized. Little wonder, it has turned out to be the most expensive election in the history of Nepal for the government as well as for contestants.
Interesting as they were, political hustles pale in comparison to the covfefe bustles of the intelligentsia, the media, and the civil society that were clearly divided into at least four groups: The Trumpards, the Putinistas, the Ximians and the BuckLOLs!

Trumpard is a neologism that comes from asocial media, particularly Tweeter and Facebook, which are not particularly well known for being very considerate of others. The term takes its name from the progenitor of covfefe, rhymes with retards, but is not meant to be an insult to slow learners. Predictably, most Trumpards of Nepal pledge allegiance to the Grand Old Party of Nepal.

The NC Trumpards return home from Ivy League institutions of their Holy Land to preach xenophobia, chauvinism and jingoism on home ground. At least against Madhesis—the loyal patrons of the GOP since the time when it was revolutionary—Trumpards are invariably biased, habitually prejudiced and can’t write or speak a sentence without invoking stereotypes once created by propagandists of Rana and Shah regimes to protect and promote their interests.

Historian Ayesha Jalal once used the phrase ‘intellectual wasteland’ to describe Pakistan. It’s equally, if not more, true of the country of half of the Mount Everest; quarter claim upon Buddha because he was born as Siddhartha in Lumbini, attained perfect enlightenment at Bodhgaya, gave his first sermon about four noble truths at Sarnath and achieved Mahaparinirvana at Kushinagar; and possession of about one-fifth of all one-horned rhino left in the world, which Khas-Arya Chieftain Oli insists must be called Gaida in all languages because he thinks its unique to Nepal.

It’s perfectly alright for Ximians to believe in factoids that they have manufactured in cahoots with Mandale intelligentsia, which like their Russian tribesmen of the Soviet era meant people with fancy diplomas and well-paying jobs under state patronage.
Trumpards trumpeted state propaganda without realizing that skepticism towards the government of the day is sine qua non of sound patriotism. Mark Twain puts it as it is: “Loyalty to the country always, but loyalty to the government when it deserves it.” Constant questioning is the only way to ascertain whether a regime deserves the loyalty of its citizen. But don’t tell that to Trumpards, they don’t read anything more than Tweets of their favorites in tight echo chambers.

The US and its allies from Europe and East Asia had invested heavily in the development industry since the 1950s to counter leftwing politics. The single-identity nationalism is as much a legacy of monarchical past as a product of homogenization project of the Cold War competition for sphere of influence.

After the 1990s, the emphasis of the West shifted slightly leftwards to control extremism. They bankrolled the bourgeoisification of UML by funding their thousands of NGOs over several decades to cultivate the party as a bulwark against Maoists. But hatred of the ‘other’ of all kinds is an inevitable byproduct of bourgeoisification. The primary force that moves Ximians is demagoguery and Chieftain Oli revels in it.

The West, particularly the US, thought that it held a monopoly over Soft Power after history came to an end with the unraveling of Soviet Block in late-1980s. President Xi Jinping is administering a similar but more powerful antidote in the form of what has come to be called the Chinese Sharp Power.

Homophonous similarity is accidental, but it’s true that when injected with sufficient doses of Sharp Power, Ximians begin to resemble simians in character and behavior. They may be causing more harm than good to their oligarchic party bosses with antics similar to that of a simian attendant using a sword to swat away a fly from the nose of its master, but for now, Ximians are happy that Trumpards are aping their frolics.

The Putinistas—with a combination of Stalinist centralization and nationalistic populism of Peronism—are renegade Maoists that serve the interests of their own crony capitalists. Supremo Dahal is adept at energizing his flock with populist rhetoric that keeps changing with the tune of the time. Once it was autonomy and inclusion, now it’s the season of stability and prosperity. Triumphalism among Putinistas is unmistakable.

That leaves out the only losers of the covfefe year—the buckLOLs—rhyming with the Maithili word ‘baklol’ with similar meaning. They have been reduced to being political chowkidars along the Bihar border. Losers don’t deserve elaborate explanations. Good riddance Covfefe 2017!

Democratization should not be misunderstood as merely creating more structures, populating them and pursuing ritual elections. ... Read More...

Now, Nepal's diplomatic capability should be proven to convince the USA to review some controversial provisions in the MCC and... Read More...

As Nepalis, we all need to be proud of King Prithvi Narayan Shah and his contributions to the country. He... Read More...