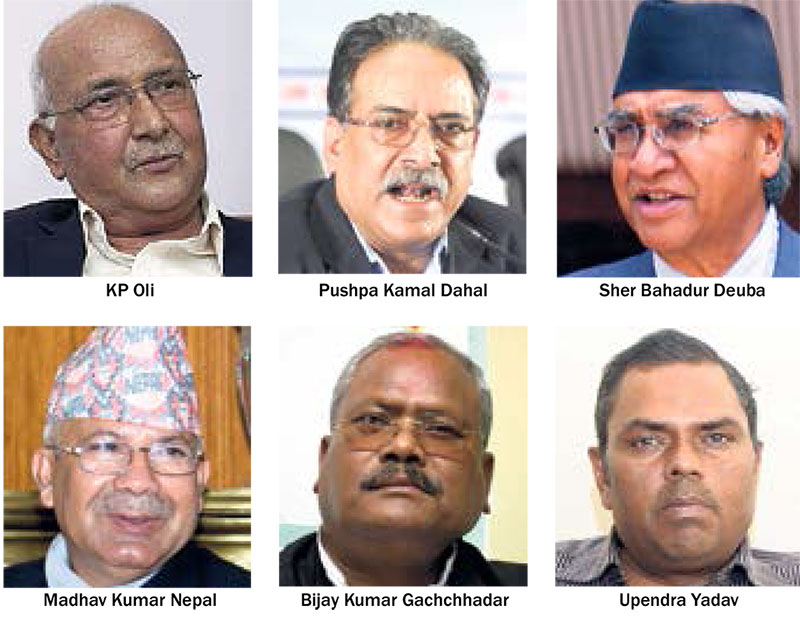 A candidate from Jhapa-5 for the parliamentary election, KP Sharma Oli, chairman of CPN-UML looks quite confident of his victory. He is contesting polls from Jhapa district for the 6th time. In his address to the public, Oli has been telling them that UML's alliance with the Maoists was the need of the time and there is no option to the victory of the left alliance for political stability in the country. "If you want this country to really move forward, you got to ensure that the left alliance wins," he says. According to the party cadres of CPN-UML, Oli's popularity is apparent and he is sure to win the election. They say that there is no strong contender against Oli and that has also given him a big relief. Interestingly, during his speech, Oli is seen hardly forgetting to teach voters how to cast him their votes on the ballot paper.

The gestures made by chairman of the CPN (Maoist Center) Pushpa Kamal Dahal and CPN -UML chairman KP Sharma Oli at an election program in Madi, Chitwan on Sunday was spectacular. As the parties have formed an alliance for the election, the leaders of the two parties are seen together in such functions these days. On Sunday, they tightly hugged and greeted each other soon after delivering their speeches.
Dahal looked a bit serious but content. Addressing the public, the candidate of the parliamentary election from Chitwan-3 said that he was suggested not to visit Madi as it would not be safe. "However, I am here and now my fate is in your hands," he said.
The general assumption is that it is challenging for Dahal to win due to other strong contenders. However, the alliance between his party and the CPN-UML could turn the situation in Dahal's favor, people say. During the local level elections, the relations between the two parties were not very good. Noticeably, Badarmude, where 38 civilians had died when the ex-rebels targeted a pubic bus during the conflict falls in Chitwan. So, for Dahal, asking the locals for votes is certainly not easy. However, during his face to face with the public, Dahal looked confident to overcome the barriers.

PM Deuba eyes yet another victory

Prime Minister and Nepali Congress (NC) President Sher Bahadur Deuba, who has been winning parliamentary elections from his home electoral constituency, Dadeldhura, since 1991, is eyeing yet another victory in his glittering political career.

Deuba's poll prospect has become the talk of the town in Dadeldhura. He faces challenges from the electoral alliance between the country's two largest communist parties.

The left alliance has fielded Maoist Center's Khagaraj Bhatta against Deuba. Despite his election track, it is believed that Deuba faces a serious challenge this time around. So, 'yet another victory' may not be as easy as it sounds for Deuba.

Deuba has been soliciting votes for democracy and development. "If other candidates win, they will just be member of parliament. If I win, I will be the prime minister," he has been telling the voters.

Senior UML leader Madhav Kumar Nepal was in a big dilemma when he was asked to choose between Rautahat and Kathmandu to contest the election to the federal parliament. The reasons were obvious.

Like some other senior leaders, former prime minister Nepal was elected from two constituencies in the second Constituent Assembly (CA) election in 2013. UML's organizational strength was more or less the same in both constituencies. His rivals in both the constituencies were little known in the national politics.

But Nepal also knew that neither of the seats was safe. Voters in both the constituencies have a history of unpredictability. Nepal had lost from both seats in the first CA polls in 2008.  Despite striking similarities between the two constituencies, one thing stood out. UML had performed relatively better from Kathmandu-2 in the recently held local elections.

Nepal eventually decided to run from Kathmandu 2. Though UML leaders see Kathmandu-2 as one of the few seats the opposition is confirmed to win, it is easier said than done. Like many other seats in the valley, Kathmandu-2 appears to be headed for a close contest between Nepal, NC candidate Deepak Kuinkel and Bibeksheel Sajha Nepali's Surya Raj Acharya.

While Nepal is a seasoned politician and a known face in national politics, his rivals are equally capable in their own right. Kuinkel and Acharya have managed to draw equally bigger crowd during the poll campaigns and social media. All candidates have promised economic development and prosperity, besides ensuring better job opportunities and social welfare.

People across the country are keenly anticipating a neck-and-neck contest between NC leader Bijay Kumar Gachchhadar and UML's Bhagwati Chaudhary, who is reinforced by support of Maoist Center, in constituency 3 of Sunsari district.

They are facing each other for the second time. While Gachchhadar is focused on a 'hat-trick', Chaudhary is looking to climb the political ladder by upsetting a senior political figure.

Both the candidates have disgruntled groups. Some voters in the constituency are not satisfied with Gachchhadar for quitting his former Madhes-centric party for NC. Former Minister for Forest and Soil Conservation Bhagwati also has the challenge to pacify a disgruntled faction of his own party in the constituency.

Although the alliance may look solid for Yadav from outside, Yadav faces a tough challenge from two strong candidates.

In order to secure victory, Yadav first has to fend off the challenge from RJPN rebel candidate Jaya Prakash Thakur, an influential leader in the constituency. He faces another serious challenge is from left alliance candidate and former minister Umesh Kumar Yadav of the Maoist Center.

Former prime minister Jhala Nath Khanal and former speaker of parliament Subash Chandra Nembang are contesting from each of the two constituencies of Ilam district, representing the left alliance their party has forged with the CPN (Maoist Center).

Khanal is contesting against Bhupendra Kattel of the ruling Nepali Congress (NC), who is also a former ward chairman. Nembang, on the other hand, faces a tougher contender - NC's former parliamentarian Keshav Thapa.

As the election campaign reaches the final phase, analysts and voters in the district are confident that Khanal would easily win while Nembang will struggle. At most, Nembang will secure victory with a small margin unlike Khanal, UML analysts believe.

UML senior leader Khanal seems very confident of his victory. "Whatever promises I made earlier, I have fulfilled them all. That is the basis of my victory," he said, adding that voters are in love with his five-year development plan and he would implement it after his victory.