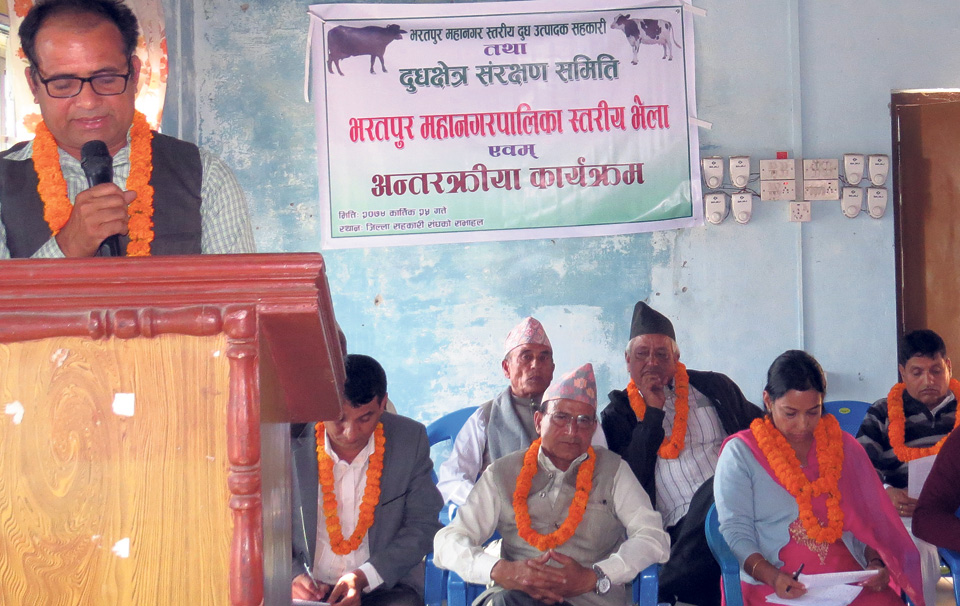 CHITWAN, Nov 12: Milk producers of Bharatpur metropolis have demanded an additional subsidy of Rupee one per liter of milk. Speaking at a function organized in Bharatpur on Saturday, they said the milk price they are receiving is insufficient.

The government has already been providing a subsidy of Rupee one per liter to the farmers selling milk to cooperatives in Chitwan and few other districts, while they are demanding an xtra subsidy from the metropolis.

The event was organized by Bharatpur Metropolitan-level Milk Producing Cooperatives and Milk Area Protection Committee. Representatives of Milk Producers Cooperatives of Chitwan said that the subsidy was important for encouraging them to produce more milk.

“Our working paper also demands subsidy of Rupee one per liter of milk in resonance with the farmers,” said Bhagirath Timalsina, coordinator of the committee. “Closing of powder milk industry at Ramnagar, Thimura of Bharatpur is saddening. The metropolis and government should think about the future of such industries.”

According to Timalsina, 138 milk producing cooperatives are in operation in Chitwan, including 60 in Bharatpur alone. He further said: “Bharatpur Metropolis has 150 professional farms rearing more than 10 cows and buffaloes which produce more than 300,000 liters of milk daily.”

“There are about 37,000 cows and 34,000 buffaloes in the metropolis currently,” Timalsina said: “More than 200,000 people can be employed and milk worth Rs 20 billion can be produced if proper plans are made to promote the sector.”

“Subsidy of Rs 23 million has been received by the milk producing farmers of the district which has played a key role in motivating them to keep up with the milk producing occupation,” said Dr Dilli Ram Sedhai, chief of District Livestock Welfare Office (DLWO).
“Many works previously done by DLWO are under authority of local governments now,” said Sedhai, adding: “Bharatpur metropolis has introduced a program for milk sector, The government has allocated Rs 16 million, which is insufficient.”

“More than Rs 40 million is needed for promotion of milk sector in Bharatpur,” stated Sedhai. “Milk production in the district can be increased if we focus on livestock health, food, upgrading of the species and marketing.”

“Government is focusing on livestock farming and milk production since they are the chief sectors for employment in the country,” said Dr Ramananda Tiwari, chief veterinary doctor of Central Veterinary Quarantine. “There are chances of 'Milk Holiday' -- a condition when milk cannot be sold -- despite upgrading of livestock farming.”

Renu Dahal, mayor of Bharatpur Metropolis, was the chief guest of the event. “Metropolis is committed on bringing farmers-friendly policies,” Dahal said: “Our target is to make dwellers of Bharatpur self-employed through livestock rearing.”

KATHMANDU, May 8: Business leaders have reiterated their demands for more subsidies, incentives and facilities in the budget for the upcoming... Read More...

Subsidy for dairy farmers gets contiunity

BANEPA, May 7: The government has decided to continue its output-based subsidy worth Rs 70 million for farmers affiliated with dairy... Read More...