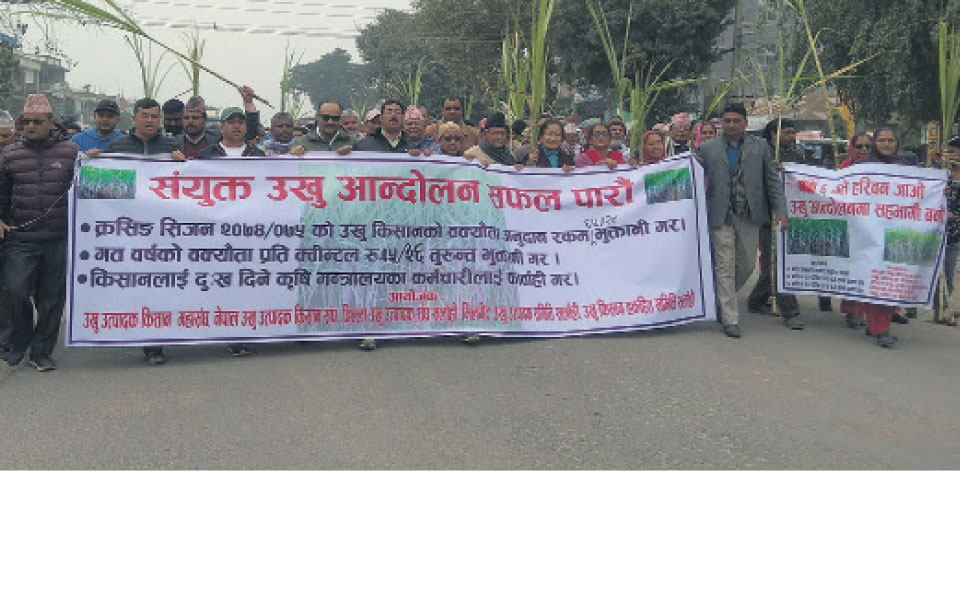 KATHMANDU, Feb 19: Sugarcane farmers from three districts – Sarlahi, Rautahat, and Mahottari – have gathered in Hariaun of Sarlahi to protest against the authorities for failing to provide them the subsidy amount that the government had decided to give them on the sale of sugarcane.

They held a protest rally on Monday, and have planned to halt vehicular transport along the East West Highway in Hariaun.

They have demanded immediate payment of their dues from both the government and the sugar mills.

Farmers have said that both the mills and the government have ignored their problems. “Both the government and mills have been deceiving the farmers since long. We always have to beg for our own money,” said Kapil Muni Mainali, president of Nepal Sugarcane Producers Federation.

He further warned that the farmers may go to indefinite protest and road blockage if they were not paid their due amounts by Wednesday.

According to Mainali, the farmers were facing difficulty in receiving the government subsidy because of cumbersome bureaucratic formalities.

Meanwhile, the Ministry of Agriculture and Livestock Development claimed that they have paid the subsidy amount to the farmers of Bara, Sunsari, Morang and Kanchanpur districts.

“The government has failed to implement its own decision,” Mainali said, “We have had frequent discussions with officials of all levels, but our concerns have remained unheard.”

The farmers have asked the government to devise a long term solution for this problem.

“We are tired of begging for our own money. This is not our desire to protest, but the government’s behavior had compelled us to protest against them.” he said, adding: “If the government could not give a way out by Wednesday, farmers will continue halting vehicular transport on the highway.”

“In the last month of December, 2018 mills had signed an agreement with farmers committing to clear their dues within 45 days,” Mainali further added.

While the country’s own product is not getting proper market, huge quantities of sugar is being imported each year, he said.

Three sugar mills of Nawalpur and Parasi districts have started crushing sugarcane. However, farmers have not got payment for their... Read More...

KATHMANDU, July 7: Sugarcane farmers in the southern belt of the country have been awaiting payments for thousands of tons... Read More...

MAHOTTARI, June 11: The sugarcane farmers have called off their sit-in programme following the commitment of Minister for Industry, Commerce and... Read More...