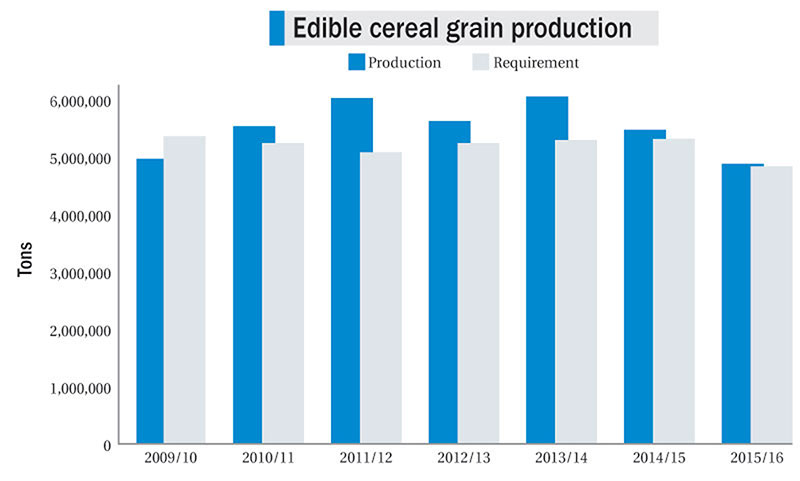 Nepal has also been receiving food aid from ‘work for food’ program of the World Food Program (WFP) and from other countries like Japan, China, Saudi Arabia, Switzerland, the US, France and Italy. It has mainly received rice, wheat and maize from these countries. Another interesting point, as we can also see in the accompanying graph, is that the country’s food requirement significantly decreased in 2015/16 as compared to 2009/2010. This might probably be due to outmigration of a significant number of youth in recent years. It is now estimated that as many as five million Nepali youths are living outside the country. So perhaps their absence is reflected in our reduced food requirement.

It is also noteworthy that although food prices grew significantly following the last two blockades (1989 and 2015) of our borders, there was no food shortage in the markets in their aftermath. This also indicated that the country was able to produce required amount of food during those testing times. Why is then Nepal importing food and where has all the imported food gone? Or are the data presented in the table not reliable?

Agricultural economists and experts attribute the increase in imports to increasing population, lack of modern agro technology, misuse of agricultural land for other purposes and the country’s weak food distribution channels. On the surface, these are the only factors responsible for increasing food imports. But if we examine the situation analytically, there are some hidden factors too. One such hidden factor is “import for export”. But there is dearth of data on how much imported food is exported informally and where it is exported. Such information can only be obtained through detailed periodic surveys.

Now let us discuss the reliability of production data. There are two major sources of agricultural data in Nepal: the Ministry of Agriculture Development (MOAD) and the Central Bureau of Statistics (CBS). They are both involved in collecting agricultural data crop area and production.

CBS collects these data through the Crops and Livestock Survey (CLS), while the MOAD data are based on field reports of extension workers and ministry data is mainly used for forecast and early warning purpose.

CBS is also responsible for the decennial agricultural census. There are no other sources to challenge these production data at the moment. But there is plenty of room to improve data-collection methods. The inclusion of export-import information in CBS survey can be one of the ways.

Another aspect to be analyzed in this context is the dietary energy supplies (DES)—food available for human consumption expressed in terms of kilocalories. According to a joint report of MOAD and CBS prepared for FAO Nepal (2016), there has been a steady growth in DES in the 2008-13 period: from 2,772 Kcal in 2008 to 2,922 Kcal in 2013, with annual growth rate of 1.4 percent. This is quiet high for a least developed country. It also suggests that we might be wasting a considerable amount of food, which may be one of the reasons why we import such a large quantity of food.

Of the total DES in Nepal, 65 percent is contributed by cereals (30 percent by rice, 20 percent by maize, 12 percent by wheat and three percent by other cereals). But there has also been a steady increase in the share of non-cereals (vegetables and animal products). This suggests that not only is there more to consume, there has been a marked improvement in our quality of diet as well. In fact, the percentage of non-cereals in total DES has been steadily rising, at an annual rate of 3.4 percent.

If we look at cereals only, the per capita requirement is 191 kg per annum while the country produces only 174 kg per annum. This justifies additional import of rice, which, predictably, is on an upward trend.

One other reason for mismatch on import and export figures could be lack of monitoring. Food traders in Nepal also tend to hoard stuff and create artificial shortage. Due to open border on three sides, those living on border areas also tend to buy goods wherever they find them cheap and sell these goods across the border where they are more costly. They do so without paying any customs. Maybe Nepal also similarly exports some of the food items it imports from India to China’s Tibet.

Unless we can keep tab of how much we are importing and from where and where the imported goods finally end up, it will be hard to properly gauge the state of food insecurity in Nepal.