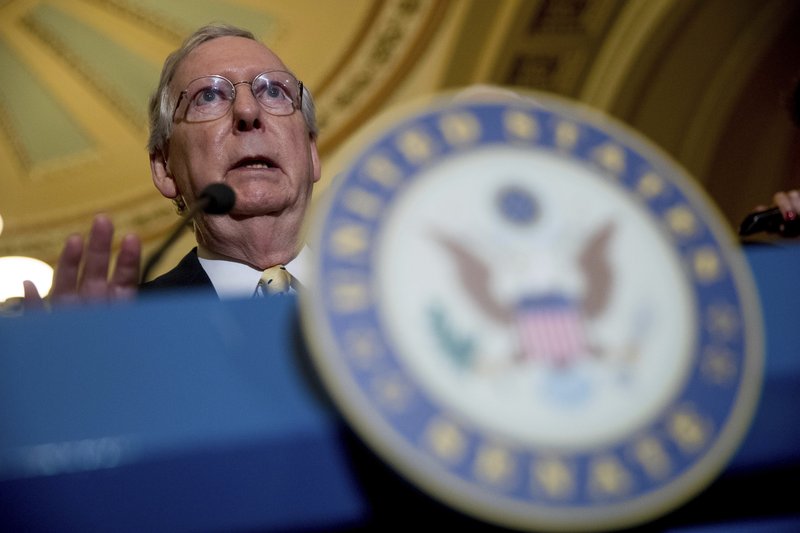 WASHINGTON, July 24: There are many reasons why the Senate will probably reject Republicans’ crowning bill razing much of former President Barack Obama’s health care law. There are fewer why Senate Majority Leader Mitch McConnell might revive it and avert a GOP humiliation.

Leaders say the Senate will vote Tuesday on their health care legislation. They’ve postponed votes twice because too many Republicans were poised to vote no. That could happen again.

The latest bill by McConnell, R-Ky. — and it could change anew — would end penalties Democrat Obama’s health care law slapped on people without insurance, and on larger companies not offering coverage to workers. It would erase requirements that insurers cover specified medical services, cut the Medicaid health insurance program for the poor and shrink subsidies for many consumers.

Perhaps more ominously for Republicans, the AP-NORC poll found that by a 25-percentage-point margin, most think it’s the federal government’s responsibility to ensure all Americans have coverage. That’s a growing view — there was just a 5-percentage-point gap in March. It underscores a harsh reality for the GOP: It’s hard to strip benefits from voters.

The nonpartisan Congressional Budget Office says under McConnell’s plan, 22 million more people would be uninsured by 2026, mostly Medicaid recipients and people buying private policies. For single people, the typical deductible — out-of-pocket expenses before insurance defrays costs — would balloon that year to $13,000, up from $5,000 under Obama’s law.

Note to the entire House and one-third of the Senate, which face re-election in 2018: 15 million would become uninsured next year. And though CBO says average premiums should fall in 2020, they’ll head up in 2018 and 2019.

With a 52-48 GOP majority, the bill would survive if no more than two Republicans oppose it. With the indefinite absence of the cancer-stricken Sen. John McCain, R-Ariz., McConnell’s margin of error shrinks to one.

At least a dozen senators have expressed opposition to the legislation or been noncommittal. Lawmakers and aides say others haven’t publicly surfaced.

Moderate senators from states with vast Medicaid populations want to protect those voters. Conservatives consider it their mission to eliminate the law they’ve campaigned on abolishing for years. These aren’t easily resolved disputes.

He also has public approval ratings below 40 percent — Bad! — and a propensity for turning on people.

After Ryan labored for months before the House approved its health care bill and earned a Rose Garden celebration, Trump called the measure “mean.” Trump said he wouldn’t have picked Sessions for his job had he known he’d recuse himself from investigations into Russian meddling in last year’s campaign.

Some lawmakers might not be blamed for declining to carry Trump’s water.

Trump expressed frustration with Republicans Sunday on Twitter. He said: “It’s very sad that Republicans, even some that were carried over the line on my back, do very little to protect their President.”

While he didn’t directly say why he was upset with GOP lawmakers, Trump’s tweet came as lawmakers are struggling to reach agreement on health care.

The bill’s rejection would still let lawmakers cast votes showing their positions. Supporters could say they honored their repeal “Obamacare” pledges, foes could say they protected their states or adhered to conservative principles.

Defeat would let the Senate refocus on tax cuts or other initiatives, though it’s unclear what major issues don’t divide Republicans.

A loss means there won’t be a GOP law voters might blame for health care problems they encounter. Though Republicans may already own the issue in the public’s eye, since they run the government.

This isn’t happening, right? Republicans have run on repealing “Obamacare” for years.

The administration won’t let the effort fail without a fight.

Trump lunched with senators at the White House last week and tweeted that Republicans “MUST keep their promise to America!”

The health bill’s floundering has tarnished McConnell’s reputation as a legislative mastermind. Many Republicans privately say if the votes were gettable, he’d have gotten them already.

But the 33-year Senate veteran is wily and doesn’t want his record stained with this failure. He understands what GOP senators need and has time, and if anyone can rescue the legislation, it’s him.

GOP senators cross Trump at their own peril. Eight in 10 Republicans still rate him favorably. In the 2018 midterm elections, when turnout is traditionally down, those loyal voters could make a difference.

NEW YORK, July 30: Weary Republicans in Washington may be ready to move on from health care, but conservatives across... Read More...

Nepal’s trade deficit grew by around 25 percent to Rs 1.26 trillion in first 11 months of current FY
14 hours ago
As a Dalit girl is denied a room to rent, an int’l report highlights poor representation of Dalits in  state’s judicial, law enforcement agencies
8 hours ago

T.U. to resume suspended exams from mid-July
5 hours ago