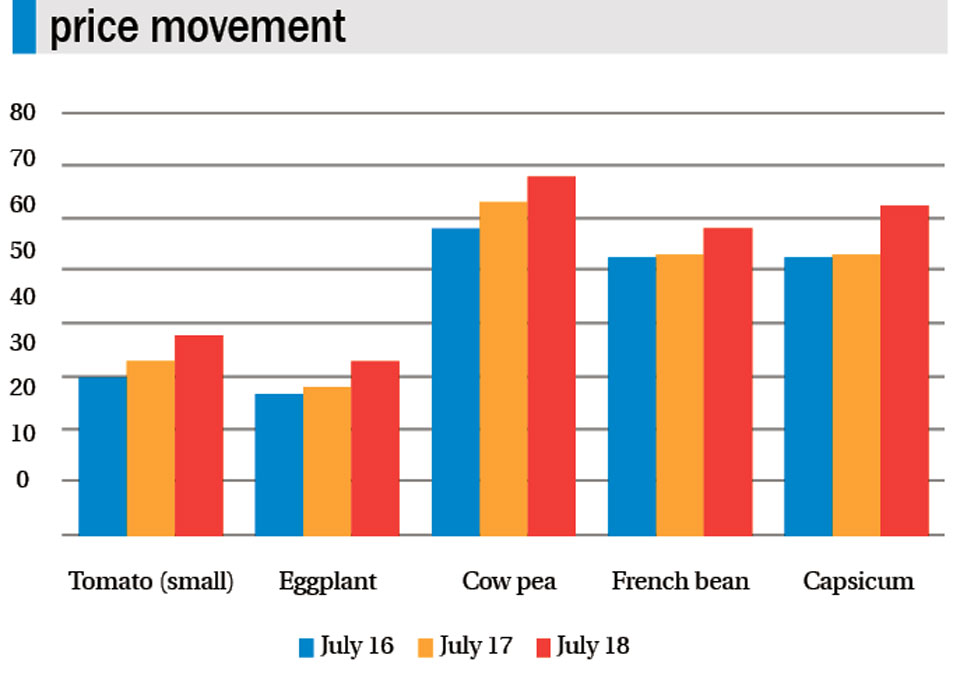 KATHMANDU, July 18: Wholesale price of vegetables has started to climb up as the end of growing season nears. Seasonal vegetables like tomato (small), eggplant, cow pea, French bean and capsicum have seen consecutive price hike in the last three days.

“The supply has been decreasing as the production is low,” said the planning officer at Kalimati Fruits and Vegetables Market Development Board (KFVMDB). “The growing season of vegetables like eggplant, cow pea, French bean and capsicum is near, so their prices are going up.”

Dangol said that ongoing rains have caused the production of tomato to fall. “It ripens fast on sunny days, because of which we get frequent supply in the market,” he told Republica. “But as the country has been witnessing rainfall almost every day, both the production and supply have been hampered.”

Officials say that as monsoon is the season of paddy plantation, it automatically decreases the production of vegetables in local level. The supply is expected to be on the lower side until mid-October as it is the season for paddy and other crops until then.

When there is less supply in the market, the price goes up. According to Dangol, along with the end of season, supply and distribution can have an impact on the determination of price in Nepali market.

“Another reason for price fluctuation is the month of religious fasting as Nepali women will be fasting every Monday in Shrawan (mid-July to mid-August) so, it is likely to affect the market price,” he further added. “The number of women in vegetable supply and distribution has been growing and their absence can have a huge impact on the market.”

The market saw disturbance in supply and distribution on Monday as most Nepali women engaged in vegetable business fasted.

Two weeks earlier, the price of major vegetables had plunged due to oversupply in the market. The price of tomato (small) and French beans had plunged by 30 percent on the 1st of July. “Vegetable market experiences price fluctuation in the beginning or ending of their prime season of cultivation,” stated Dangol.

Though officials have anticipated possible price hike because of disruption in transportation during the monsoons, it has not hampered the supply and distribution yet.
A total of 650 to 750 tons of seasonal vegetables are supplied to Kathmandu from different parts of the country on daily basis.

KATHMANDU, July 16: The process to collect inputs from stakeholders for drafting an education regulation is in its final stage,... Read More...