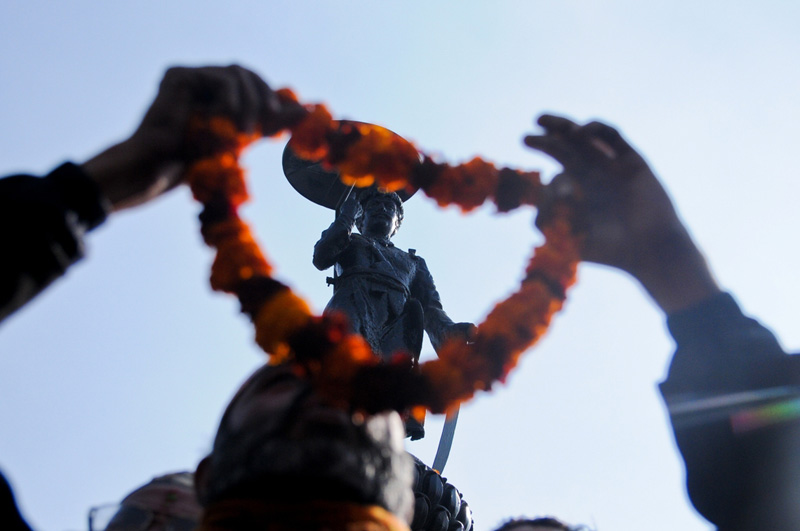 Exploitation of the country’s people and its riches truly took place during the continuous 105 years of Rana rule
Linguistic and ethnic differences in Nepal are being stirred up again to rile one group or another. Every minority accuses the Nepali-speaking population of cultural and linguistic dominance. Janajati and Madhesi leaders accuse others of not naming and delineating federal provinces in the constitution as per their demands. Others accuse Madhesis of being greedy and asking for a Madhes province comprising of all 22 districts in the Tarai. The majority of the population wants the country to remain an official Hindu state. But secularists accuse this majority of falling prey to jingoistic sentiments. Every group accuses the other as the status-quo.

How did we end up here?
When the British came to the Indian subcontinent, and started to occupy its lands, Kathmandu Valley was a major trade route between what is today India and Tibet/China.

The wealthy kingdoms in the valley were steeped in cultural, trade, financial and developmental glories. They were not oblivious of the soon-to-come British invasion, but had no plans to defend against it, either. It was only a matter of time before the British conquered all of India and set their sights on the northern kingdoms in today’s Nepal.

However, it took a Shah King from a much poorer hilly kingdom of only 12,000 people to design a unification strategy as a way to defend against the incoming British. The Gorkha Kingdom may not have had the culture, history, finances or manpower of Patan, Kathmandu or Bhaktapur, but it had the vision that the more accomplished kingdoms in the valley sorely lacked. We have been a proud and sovereign people for over two centuries now due to that one Shah king’s vision.

Prithvi Narayan is not much appreciated these days. It wasn’t long ago that it was not the case. The public was staunchly pro-monarchy and worshipped the Shah kings as avatars of Lord Vishnu. The Maoists built propaganda against that image, and succeeded to change enough mindsets to overthrow the monarchy. The mystery surrounding the royal massacre and King Gyanendra’s (and his son’s) unpopularity played their part as well.

Many statutes of Prithvi Narayan around the country were brought down from their pedestals. Many people were happy that the centuries-long Shah oppression had finally ended.

However, it is erroneous to believe that the Shah dynasty continuously ruled Nepal since 1769. The Shah kings directly ruled Nepal for a total of 107 years, in installments—77 years between 1769 and 1846, 29 years between 1961 and 1990, and a year between 2005 and 2006. They were ceremonial heads for 27 years—10 years between 1951 and 1961, 15 years between 1990 and 2005, and two years between 2006 and 2008. For the first 77 years of Shah rule, Nepal was a unified country in name only, mainly for international purposes. Internally, we no longer had a king in every town, but we also did not have solid administrative structures. The country was administered and governed very loosely. After the unification, the ex-kingdoms were now municipalities, still ruled by local elites with substantial local autonomy.

Exploitation of the country’s people and its riches truly took place during the continuous 105-year Rana regime (1846-1951). While the Shah kings of the past had been glad to relinquish their control over most of their citizens, and allow significant autonomy for local rule for the sake of national unity, the Ranas craved absolute control. The Ranas changed how the country was ruled and administered, mostly for greater benefits of Rana rulers.

They designed and perfected the art of exploitation. The Shah kings felt that they owned the country, the people were their subjects, and it was the duty of the kings to care how their subjects fared. On the other hand, the Ranas knew that their control over the country was temporary—they did not own the country, the Shah kings did—and this meant they had to exploit and enrich themselves as quickly as possible. There is no question who destroyed Nepal.

No other Shah king receives more negative press than Mahendra. Like all Shah kings, Mahendra felt that the country was his, he owned it, and he had to protect it. In 1951, he had seen China annex Tibet, then an independent country. Post-independence India had been trying to annex Nepal, and historians have written about Mahendra’s confrontations with India’s leaders on the issue. Disbanding the democratic government, forming the Panchayat system, and pursuing a neutral policy between India and China were his attempts to ensure Nepal’s long-term survival. In 1975, India annexed Sikkim, then an independent country. The United Nations and the world’s superpowers had failed to defend both Tibet and Sikkim’s sovereignty. Some see this as proof that Mahendra’s worries about Indian intentions were spot on.

National survival and sovereignty are contingent on a degree of integration. And, integration of a society as diverse as ours could not have been accomplished without force. Prithvi Narayan accomplished that first by creating one single country instead of dozens of fragmented mini-nations, and established the modern Shah monarchy. The Ranas could have easily ended the monarchy when they were in charge. However, the monarchy was the glue that held Nepal together. The Ranas recognized this, and kept the monarchy alive. Even after the Rana-rule ended, the monarchy was still the glue that kept the country together.

Mahendra introduced policies to further integrate the country. Very few Nepalis lived in the Tarai because it was swampy and malaria-infested. Mahendra encouraged people in the hills to go and settle in there. There were two clear advantages of that policy. First, the Tarai had productive land that was not being put to use. People moving from the hills to the Tarai would increase the region’s agricultural output and create new economic opportunities. Second, a thriving population in the Tarai would ensure territorial defense against Indian encroachment. Remnants of this latter reasoning can still be found in far-western border villages. Mahendra gave free land there to poor people from the hills and also gave them guns to defend the border in case of Indian aggression. Households in those villages still have the guns that Mahendra gave them.

Claims by the Janajati and Madhesi leaders that there is a grand design and centuries-long plan by the Khas population to dominate others is wrong. Nobody makes centuries-long plans. If the Newari Kings in the Valley had the vision of unification and acted on it, we would all be speaking Newari today. However, that did not happen. The Khas speaking king from Gorkha united us all, and we ended up taking the Gorkhali language as the national language. It is that simple. The same dynamic works in every single country in the world today. Go look it up.

It is always good to look back and see how we became the people we are today. We had no say in how our history was written, but we are responsible for writing our future. Being cognizant of our history—without the jingoism—to understand how we arrived here is always a good start and can show a way to the future.

The author is a development professional

Nepal’s struggle to safeguard independence and march to democracy and federal republic make for hundreds of stories to be told,... Read More...

Who wrote our history? How did the West understand Nepal? What shaped that (flawed) understanding? How should we respond? ... Read More...