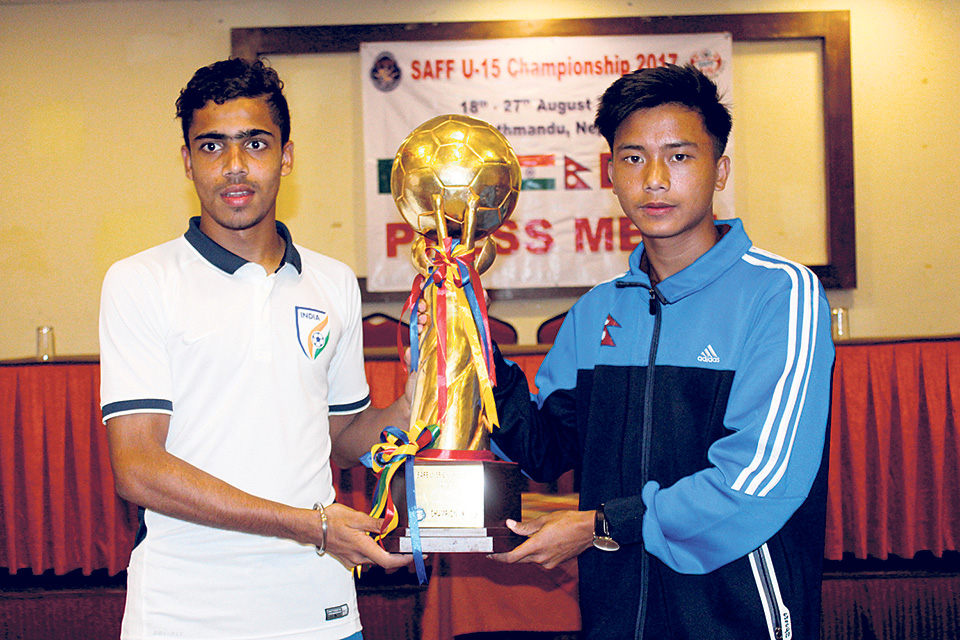 KATHMANDU, August 27: Nepal U-15 football team coach Sunil Kumar Shrestha said that his team is determined to create history beating India in the final clash to lift the SAFF U-15 Championship on Sunday.

However, Nepal has chances of setting the record this time around defeating India in the summit clash to be held in ANFA Complex, Satdobato, Lalitpur.

“India has been the strongest team of this championship but this time we are confident of beating them to lift the title and create the history,” said Shrestha speaking at the pre-match conference in the capital on Saturday.

Nepal defeated Bangladesh 4-2 in the semifinals on Thursday while another finalist India registered 3-0 win over Bhutan to fix the final clash against the home team.

Nepal which was pitted in the group B alongside India had defeated Maldives 6-0 before facing 2-1 defeat to India in its last group stage match. Likewise India had overcome Maldives 9-0 in the first match of the group.

Nepali coach Shrestha said that the win over Bangladesh has boosted the confidence of his players. “We are improving with every match and the victory against Bangladesh in the semifinal has made the players more confident,” added Shrestha.

He also said that the final match will be an opportunity for his team to amend the mistakes that Nepali players committed in the earlier defeat to the Indian team. Shrestha also informed that he would change the tactics in the final match.  Since the Indian players are physically tough and play long balls due to their height advantage, Shrestha said that his team will have to keep the ball possession for longer duration.

“We will give emphasis on the short passing and hold the ball to prevent Indian players building up attack,” informed Shrestha. “We will have to be defensively alert to foil Indian players’ attacks and have to utilize every chance to produce the goals.”

Indian coach Bibiano Fernandes expected that the final match between his team and Nepal would be different than the group stage matches. “Final clash will be totally different than the previous ones as Nepal will obviously come up with different approach,” said Fernandes.

He also said that Nepali team has been improving a lot and it would be hard to register consecutive wins against the home team. “Nepal has been improving in each match and the performance against Bangladesh was the best one in the tournament. So the final is going to be very tough,” added Fernandes.

Meanwhile in the third place play-off, Bangladesh will take on Bhutan at Halchowk Stadium on Sunday.

As both the teams were drawn in same group A, Bangladesh and Bhutan know each other’s games. However Bangladesh will come into the match with extra motivation since it had defeated Bhutan 3-0 in the last group stage match.

Nepal to play against Pakistan today