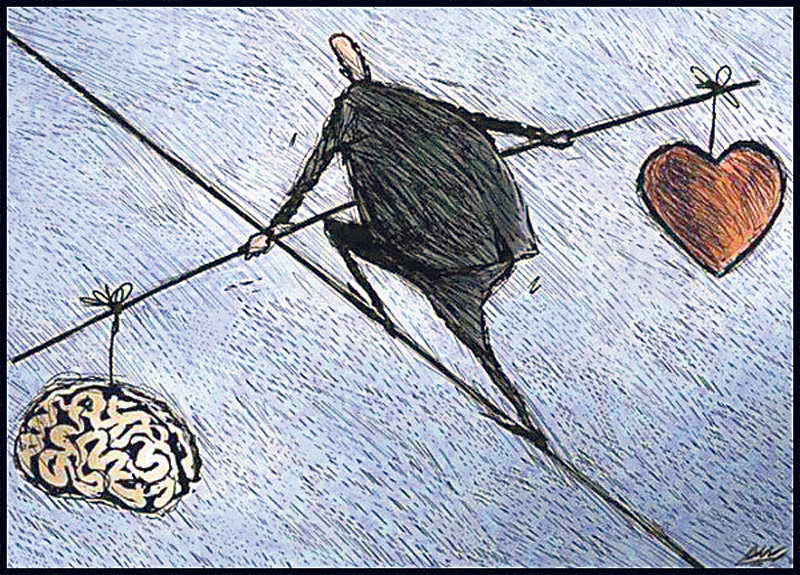 Equidistance indicates maneuvering of small states like Nepal while dealing with big powers like India and China
India brusquely declined to join China’s Belt and Road Initiative (BRI) but Nepal now is firmly its part. When Nepal promulgated its new statute, China welcomed it wholeheartedly, while India greeted the charter with a blockade. Further, delays in completion of Indian projects in Nepal are often cited, whereas Chinese projects move much faster. Also, China’s investment pledges in Nepal are higher than India’s. Today, the priorities, concerns and interests of our two immediate neighbors are different, even conflicting. The risk for Nepal is that while it tries to address one country’s priorities, the other country’s concerns might be ignored. So how does Nepal proceed?

China is eager to bring countries and continents together through BRI and to connect her immediate neighbors with global value chains. India, meanwhile, aspires to restrict neighbors like Nepal within her traditional ‘sphere of influence’ thinking. Discernibly busy in Hinduization of her political and bureaucratic instruments, India never wanted Nepal to be a part of BRI. But China wanted Nepal to join as Nepal’s geography provides China a strategic gateway into South Asia. In such an adverse situation, will Nepal keep adhering to its old policy of equidistance and neutrality?

India’s indisposition to BRI is justifiable, for when it materializes under the bilateral framework of Nepal and China, Indian markets in UP, Bihar and West Bengal could be flowed with low-priced Chinese goods routed though Nepal.

To escape its geopolitical vulnerabilities, Nepal has always been firm on equidistant relations with its two immediate neighbors. But with its formal entry into BRI, Nepal’s commitment to equidistance is again being questioned. With BRI, Nepal takes a firm step to emerge from the Indian sphere of influence in South Asia. Paradoxically, the erstwhile pro-Indian government in Nepal ultimately signed the BRI agreement with China last month.

On the security front, the concerns and interests of India and China in Nepal are incompatible. India has been accommodating the Tibetan Government in Exile in its territory, while Nepal has been strictly pursuing Chinese directives to curb the influx of anti-China Tibetans into Nepal. Securitization of foreign policy is not a new phenomenon.

Nehru, the architect of modern India, had himself acknowledged the Himalayas as the natural defense frontiers of India, while Chairman Mao branded Tibet as the palm of China, with Nepal, Sikkim, Ladakh, Bhutan and North-East Frontier Agency (NEFA) as its five fingers.

Historically, Nepal has always been closer to India, socio-economically, culturally, and geographically. However, with its unveiling of the ‘Himalayan frontier’ policy under Nehru, Nepal quickly understood that the Indian establishment in independent India still hoped to treat its neighbors with a colonial mindset.

Ideologically, equidistance is a Cold War strategy adopted by small countries in the then bipolar world. But today’s world is multipolar. Owing to this change, equidistance seems an outdated idea. Still, Nepal continues to express its commitment to the equidistance policy, through different mediums, including the proposal of Trilateralism.

Every country has a sovereign right to cherry-pick what is best suited for its growth and development. Nepal, at present, is apprehensive of India because of its direct interference in the Madhesi issue. Even prior to the promulgation of the charter, India had drawn considerable flak for trying to micromanage Nepali politics, not to mention its perennial attempts to keep Nepal firmly under its old sphere.

Nepal, at present, has high hopes of China. Its moral and logistical support to Nepal in 2015 when India had imposed the blockade was widely hailed. Now, China-led BRI is projected to generate immense benefits for Nepal, and this is being said even by policy experts and our development planners. Nepal thinks of China as a counterweight to combat Indian interference in Nepal. But it could be argued that Nepal’s policy of equidistance, survives only as a concept, and not something that is applicable. Perhaps now is the time for its thorough revision.

UML, Maoist Center for 'equidistance policy' with China and India

KATHMANDU, August 16: Top leaders of the CPN-UML and CPN (Maoist Center) have said that they want to maintain good... Read More...

Many Nepalis wrongly believe the 1950 treaty or the subsequent Letters of Exchange accompanying it provided for open border ... Read More...