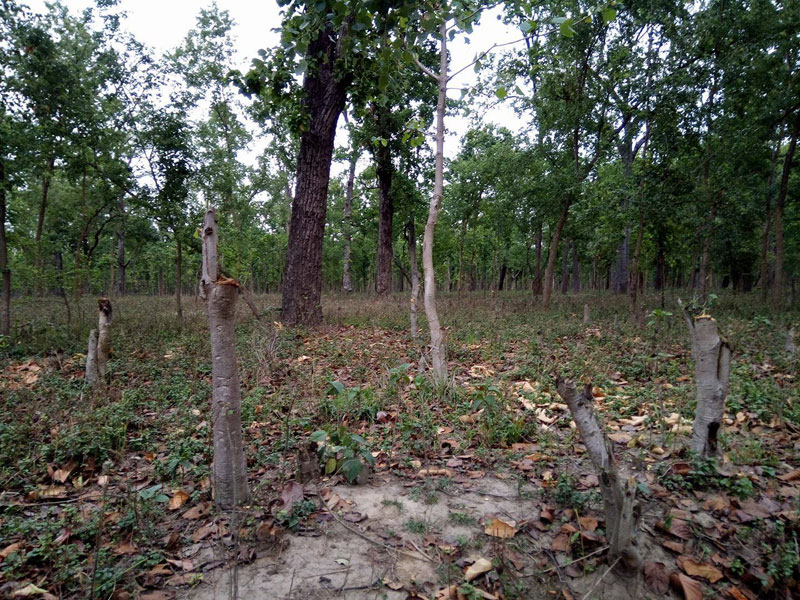 TIKAPUR, May 30: Some years ago, Prabhunarayan Chaudhari would not dare to walk alone through the dense jungle near Tikapur. Rampant deforestation in the recent years has helped him overcome his fear. “Now I have a new fear in my heart. I fear if the present trees will be around in the next few years,” he said.

Chaudhari, a resident of Janaki village stated that trees are cut down in broad daylight. In lack of monitoring or restrictions from stakeholders, he asserted, both locals and timber mafias are finishing off the jungle.

The population of trees in Kailsheshwor Community Forest has been gradually depleting. Villagers informed to Republica that the situation has gone worse in the last two months. They said that Saal and Sisam trees are disappearing from the forest rapidly.

“14 years ago we had planted saplings in this forest. Those plants had not even fully grown but they have been cut down,” said Chaudhari. “Now most parts of the jungle looks empty,” he added.

Residents of Bijaynagar, Ektanagar, Shaktinagar and Shivanagar also complained of rampant deforestation in their areas, though they admitted that many local themselves are involved in the illegal deforestation.

“Even if you are member of community forest, you cannot cut trees on your personal whims and needs. There are certain rules and procedures that one should follow for getting timber from the community forest,” said Chauhadri. “One of the first priorities of a community forest conservation committee is to ensure the conserving the jungle while providing permissions for cutting trees to any of its members. But these procedures are not followed even by the community forest's consumers, let alone timber mafias,” he added.

Timber smugglers mostly eye the Saal trees, according to locals. Since the timber of Saal tree fetches good return, Saal can hardly be protected from them. In case of the residents, they cut any trees that cater to their daily needs.

Kaleshowar Community Forest has 1,957 consumers. They are from Durgauli VDC and Tikapur Municipality. Chaudhari says that these consumers are not much interested in controlling the deforestation. “Their silence has been letting others to cut down trees. And in some cases, the very consumers collude with the timber mafias.”

Shivalal Chaudhari, a resident of the Tikapur Municipality said that the local level election added to the problem. The elections, he said, made the atmosphere even more conducive for the timber mafias and locals to cut trees.

“Conservation efforts were not effectively implemented and monitored prior to the elections. However, since the elections were announced, timber mafias exploited the election mood,” Shivalal said. Elaborating further on why people like him don't raise voices against the timber mafias, he said, “They cut trees in front of our eyes and we can not do anything. They come in huge groups and it is impossible for the locals to fight with them.”

Apart from the locals and timber smugglers, squatters settlement in and around the jungle has become one of the biggest threats to the forest, Shivalal said. First they appear as homeless people needing some space for shelter. However, later, many of them work for timber mafias, he alleged. “They are big challenge to forest conservation. They cut down as many trees as they want. And sometimes they even work with the mafias,” he stated. “The smugglers usually cut and transport trees during night but sometimes they even do in broad daylight,” he added.

Bal Krishna Chaudhari, office secretary at the Kaleshwar Community Forest, stated that their conservation efforts have not been effective due to lack of support from some members of the consumer group. “We have been trying to save forest but it is difficult since all consumers are not serious about it. Moreover some are themselves involved in deforestation.”

Condition of the Kaleshwar Community Forest deteriorated after its chairman Ramesh Lal Chaudhari went on the run. Ramesh Lal is one of the accused in "Tikapur incident" of August 2015. Though the committee has an acting chairperson, Bal Krishna said that the new leadership has not been effective.

“Our chairperson was one among the Tikapur incident accused. He has not been in touch since then. This community forest is major forest in Tikapur and is targeted by smugglers more than any community forests around. But in lack of a competitive management team, it has become vulnerable more than ever.”

A Sector Forest Office is located nearby this community forest but this has not deterred the timber smugglers. Prabhunarayan said that the officials have shown no concerns towards the gradual depletion of the forest. When Republica approached officials at the sector office for a comment, they declined the request.

BAJHANG, July 19: With the rise in smuggling of woods, locals of Kedarsiu Rural Municipality-6, Jasuda have started fearing landslides and... Read More...