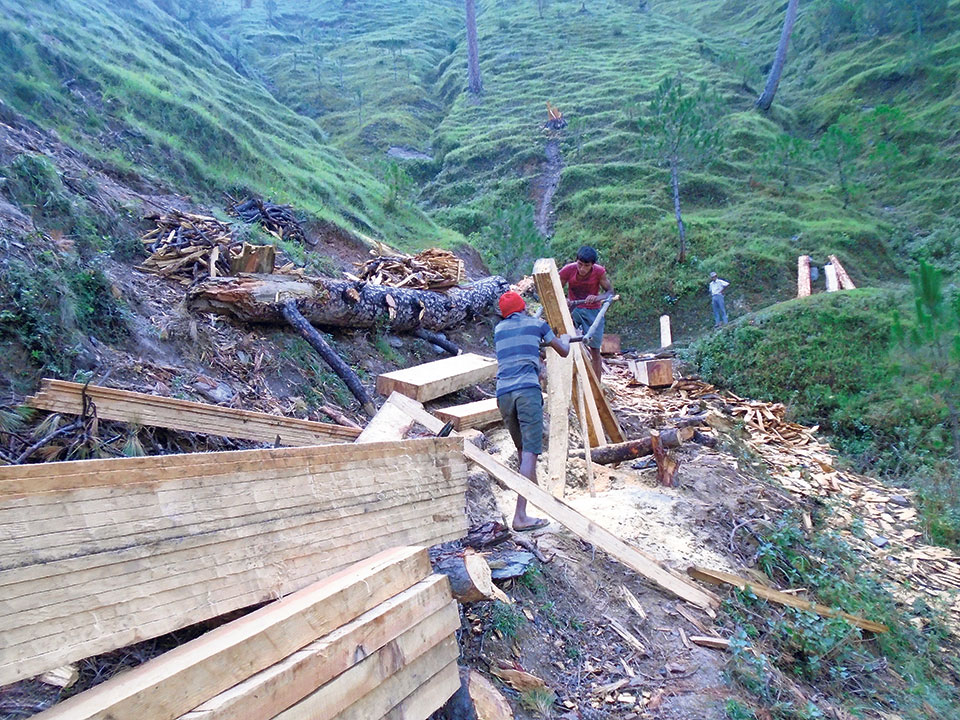 llegally chopped pine logs in the forest of Jasuda in Bajhang district. Photo: Jagat Khadka/Republica I

BAJHANG, July 19: With the rise in smuggling of woods, locals of Kedarsiu Rural Municipality-6, Jasuda have started fearing landslides and displacement.

Instead of protecting the pine trees in the forest, some people have started chopping them randomly for smuggling. Locals are now worried that their houses may be swept away by landslides triggered by soil erosion. According to a local, Jayvane Bohara, villagers should try to conserve the forest by transforming it into a community forest. "Instead of planting more trees, people are illegally cutting and selling them," he said.

He further informed that when people are told not to chop off the trees, they resort to quarreling. The forest which was once full of green trees has started wearing a deserted look now. With the onset of monsoon, villagers have started having sleepless nights worrying about landslides. All 35 households will become a single grave if the village is swept by one major landslide.

It's not the locals of Jasuda but the people of the neighboring villages who have been chopping trees. "We can't sleep at night thinking that we might not be able to wake up the next morning," said another local Umesh Bohara.

It's not that the locals have not made any efforts to curb deforestation, but their pleas were unheard by the District Forest Office (DFO) and the rural municipality. Last year, locals of Jasuda had reached the DFO requesting it to establish a community forest. But their demand could not be addressed due to lack of coordination between the consumer committees, according to DFO official Ashok Kumar Shrestha. We have urged the people not to chop trees but they still continue to do so.

TIKAPUR, May 30: Some years ago, Prabhunarayan Chaudhari would not dare to walk alone through the dense jungle near Tikapur.... Read More...

ARGHAKHANCHI, Sept 11: At least 56 houses in Sandhikharka-9 of Arghakhanchi district are at high risks of being swept away by... Read More...

Villagers in perpetual fear of landslides

MYAGDI, Sept 5: The unwelcome appearance of fissures on the surface and sporadic landslips in Banshbot locality of Begkhola –... Read More...