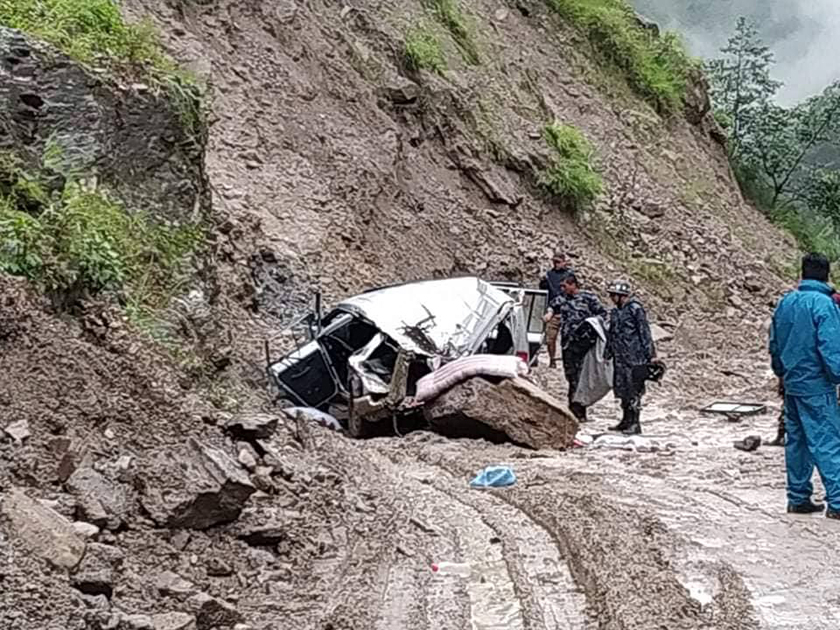 RASUWA, July 28: Two persons were killed on Saturday as landslide triggered by torrential rainfall in Rasuwa buried a four-wheeler in Gosaikunda Rural Municipality ward-2. The deceased have been identified as Wangchhu Sherpa, 47, and Dawa Sherpa, 40.

Two passengers died on the spot, informed the local police.

Both the deceased are said to be the locals of Solukhumbu.

Seven others travelling in the jeep have been injured while the driver, Fursang Syangtan, of Sindhuli is said to be fine.

The ill-fated jeep heading to Kathmandu from Rasuwa carrying 10 passengers was buried by the landslide.

Landslides often claim lives of passengers travelling to Gosaikunda, a trekking hub of Rasuwa, during the monsoon season.

Vehicular movement along Prithvi Highway obstructed due to rain-triggered landslide

DHADING, Sept 23: Vehicular movement along the Prithvi Highway has been obstructed since last night due to a landslide that... Read More...

One dead as house collapses in Nuwakot, five other houses buried

About 30 killed in landslide at Chad gold mine

N’DJAMENA, Sept 26: A landslide at a gold mine in northwestern Chad has killed about 30 people, the defense minister said... Read More...

Let's not overshadow the issues that Prem Archaya tried to raise: Dr Toshima Karki
8 minutes ago