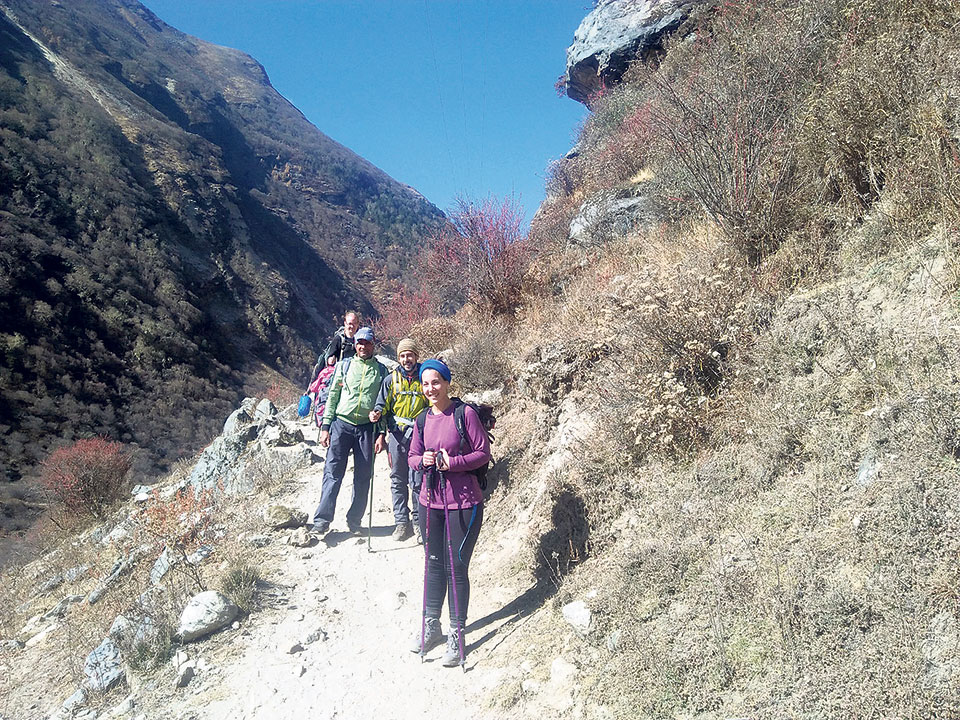 According to records of LNP, 883 tourists had visited the district in the first year of the establishment of the national park. The number peaked in 17,054 in Fiscal Year 2014/15. The district welcomed 305,540 foreign tourists by the end of Fiscal Year 2017/18.

Shiva Lal Gaire, an information officer for the Lantang National Park, said that tourist footfalls have been increasing in recent years, thanks to effective promotion and restoration of trekking trails, among others.

Rasuwa is home to famous religious landmarks -- Gosainkunda Laka -- and over 100 high-altitude lakes. Historical sites like Rasuwagadhi fort, unique Tamang culture and tradition, and high mountains of Langtang range are the other attractions of the district. The district is also home to 55 ancient monasteries. Similarly, Rasuwa is also rich in wildlife as endangered species like snow leopard and red panda sightings have been recorded here.

Four trekking trails in the district are popular among foreign tourists. Dhunche-Chandanbari-Lauribina-Gosaikunda and Dhunche-Thulo Syafru-Lamotol-Langtang-Kyanjin are the two classic trails in the district, while two others -- Dhunche-Safru-Goljung-Gatlang, which has been branded as Tamang Heritage Trail, and Dhaibunga-Sarmathali-Yarsha trail are relatively newer.

"An average tourist stays for 10 days in the district," Dindup Lama, a hotelier, told Republica. "The number of tourists is increasing as this region can be visited without guide or porter. Trekking trails in the district are shorter and easily accessible," he added.

Most of the tourists visiting Rasuwa are from Israel, France, Canada, Japan, the US, Thailand, South Korea, Russia, Spain, Uruguay, and Singapore, according to LNP.

Tourists reluctant to go back home

RASUWA, Aug 5: The road in Rasuwa district that was blocked by an overturn goods-carrier vehicle this morning has been... Read More...