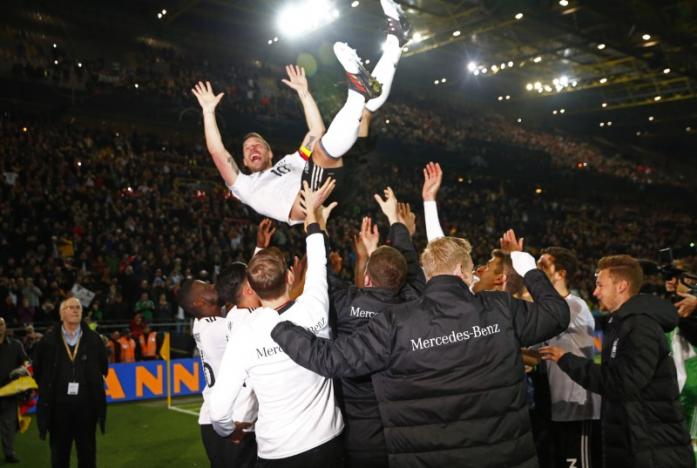 DORTMUND, March 23: Germany's Lukas Podolski capped his international swansong with a sensational goal to give the world champions a 1-0 victory over England in a friendly on Wednesday.

Podolski, who captained the team for the first time, could not have hoped for a more fitting finale to his 13-year Germany career, as he thundered in the winner in the 69th minute to take his goal tally to 49 in 130 international matches.

The 31-year-old's goal ensured an enterprising England suffered a bitter defeat having looked sharper than their hosts for much of the game and hit the woodwork in the first half.

"It's like a movie, the way it happened today. We win and I score the winning goal," a beaming Podolski told reporters.

"God or whoever gave me a left foot and it has served me well over the years."

With youngsters Timo Werner, Julian Brandt and Leroy Sane starting, the Germans struggled to find their feet and England had good chances to open the scoring through Jamie Vardy and Michael Keane, on his international debut.

Their biggest came after 30 minutes when Adam Lallana took advantage of a Joshua Kimmich mistake to charge through but, with only Marc Andre ter Stegen to beat, his low, angled shot bounced off the post.

The keeper came to Germany's rescue just before halftime, blocking a Dele Alli shot, with England looking promising in Gareth Southgate's first game in charge since being appointed full-time manager in November.

The coach deployed an experimental three-man defence and it worked wonders for more than an hour as the Germans were resigned to trying their luck with long-range shots with little success.

The visitors could not maintain their pressing game and pace into the second half before Podolski drilled home a shot from 25 metres out with his famed left foot to give keeper Joe Hart no chance.

"If you're looking at chances we had the better chances it's as simple as that," England captain Gary Cahill said. "We will look back and reflect and if we take our chances, we win that game."

"It's a learning curve. We played well today, especially first half."

The Germans, who set a national record with their seventh consecutive clean sheet, also gained revenge for a 3-2 loss to England almost a year ago to the day.

Germany will be without injured midfielder Mesut Ozil, winger Julian Draxler and forward Mario Gomez when they host England in... Read More...