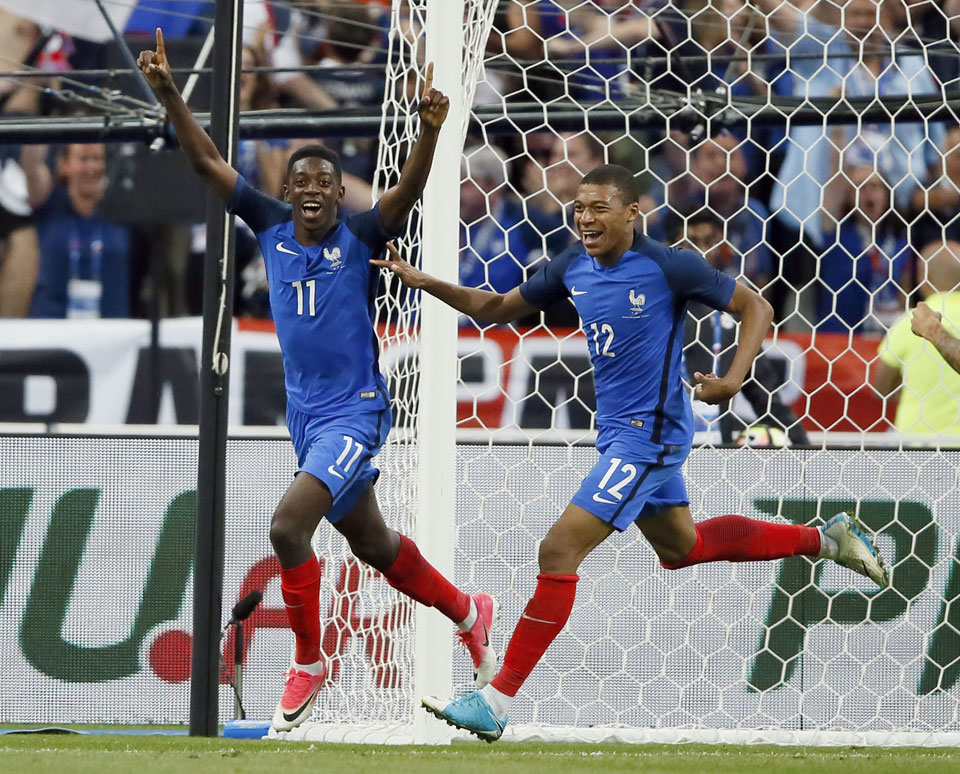 SAINT-DENIS, June 14:  Winger Ousmane Dembele scored the winner as 10-man France overcame a red card for Raphael Varane early in the second half to beat England 3-2 in a pulsating friendly on Tuesday.

Teenage striker Kylian Mbappe set up the 20-year-old Dembele's winner in the 78th minute with an astute pass, and the youthful attacking pair caused problems all night for a patchy England defense with their electrifying speed and skill.

Striker Harry Kane scored both goals for England, while defenders Samuel Umtiti and Djibril Sidibe got their first goals for France, as did Dembele. Only a fine stop from goalkeeper Jack Butland in injury time, and the crossbar earlier, denied Mbappe his first international goal.

It threatened to be another frustrating night for France at the hands of technology, with Varane sent off two minutes into the second half for conceding a penalty. Match referee Davide Massa awarded it after Varane fouled midfielder Dele Alli and then, after using the video referral system, brandished the red card.

Massa took around one minute to make his decision, talking into his earpiece as he consulted the video assistant referee while France's players remonstrated, some shaking their heads and with midfielder Paul Pogba laughing in disbelief.

"I've not seen it again, but from my initial view it looked the right call," England coach Gareth Southgate said. "Clearly, even with video, you won't get every decision right. You'll still get an element of one person's judgment within that."

France coach Didier Deschamps had doubts about the referee's decision.

"It was a bit tricky with the penalty and the red card. Having seen it again, it seems a bit severe," Deschamps said. "I'm very happy with this win, which was a difficult one considering we were down to 10 men."

Wearing the captain's armband, Kane slammed home the 48th-minute penalty for his eighth international goal and third in two games. He had given England the lead in the ninth minute of an exciting first half, with Umtiti equalizing in the 22nd and Sibibe pouncing in the 43rd.

Despite being a man down, France took the game to England and the 18-year-old Mbappe — fresh from a sensational breakthrough season with Monaco — smacked the crossbar with 20 minutes to go after a fine piece of skill.

The match had a case of deja vu about it for France, except with a different result.

When France lost 2-0 to Spain at the same stadium on March 28, that game saw the first use in France of video replays to help the referee. The technology confirmed Gerard Deulofeu's second goal for Spain — initially ruled out for offside — having earlier disallowed one for France's Antoine Griezmann just after halftime with score 0-0.

England made a great start, scoring when left back Ryan Bertrand was played through by Raheem Sterling's clever pass. He picked out Kane lurking near the back post for an easy finish.

Kane, who struck England's equalizer against Scotland in a 2018 World Cup qualifier on Saturday, is in outstanding form after scoring 29 Premier League goals for Tottenham.

Olivier Giroud, with six goals in four games for France prior to this match, thought he had equalized with a spectacular volley, only for the effort to be ruled out for offside.

Mbappe caused panic every time he got on the ball and he broke down the left to set up Dembele in the 16th, only for the Borussia Dortmund winger to shoot wide.

Soon after, Umtiti fired home the rebound from about 10 meters out after Giroud's downward header was saved by Tom Heaton, who denied Mbappe with his legs in the 30th.

Dembele lined himself up for a curler that Heaton parried. But, again, France was quickest to respond and Sidibe slammed in the loose ball.

It was hard to choose the best player for France between Mbappe and Dembele.

Mbappe's awareness and movement were astonishing for a player of his age.

The more direct Dembele destroyed England's defense for pace with surging his runs.

In one second-half moment, Dembele flicked the ball past Kyle Walker — hardly a slouch himself — and left him trailing as he embarked on a dazzling 60-meter run.

"They have a lot of speed and impact," Deschamps said. "They hurt the English defense, which is rugged but a bit slow."

Southgate had with mixed feelings.

"In the space of 90 minutes we saw what we're very good at. With the ball we caused a lot of problems, took our first goal very well," he said. "Equally we saw what we need to do better: Managing the game. When France went down to 10 men, I think we looked more anxious. Their pace and their athleticism were a problem for us."

LONDON, Jan 1: Police picked up a group of 12 migrants found on a beach in southwestern England as top... Read More...