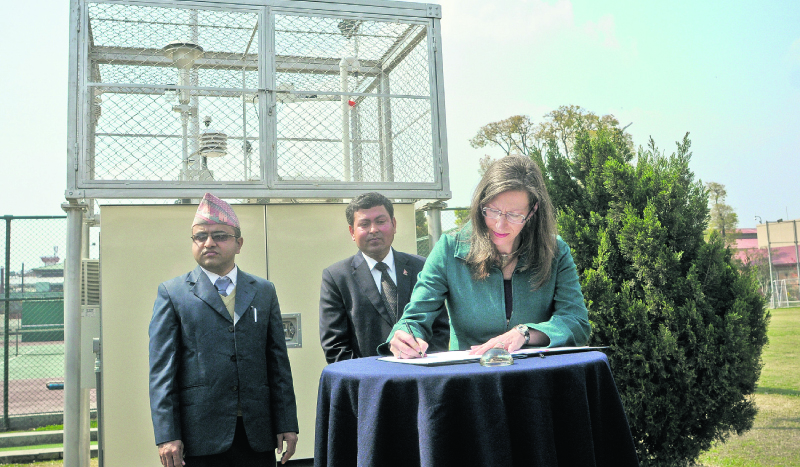 US Ambassador to Nepal, Alaina B Teplitz signs as a witness the agreement between the US Embassy and the Ministry of Population and Environment to install Air Quality Monitoring system at Phora Durbar, Kathmandu on Tuesday

The systems were installed by the Ministry of Population and Environment (MoPE) in cooperation with the US Embassy and the International Centre for Integrated Mountain Development (ICIMOD).

The station at Phora Durbar will feed data to the Environment Protection Agency (EPA) as a part of its real time air quality index measurement of major world cities. The public can access the information collected from the station through the embassy's website. On the other hand, MoPE has been disseminating air quality information to the public through its portal www.pollution.gov.np.

MoPE Secretary Oli informed Republica that altogether 56 locations have been identified throughout the country to set up air quality monitoring stations. According to him, the ministry plans to set up few more stations in the valley and Pokhara in this fiscal year.

“The ministry and department are working in close collaboration with development partners, academia, and civil society. Such collaborative efforts will certainly be fruitful for better environment management in the country,” said the secretary.

While praising the cooperation between the governments of the US and Nepal, US Ambassador Teplitz said this new era of partnership between the two countries will provide solid scientific data for citizens and for policy makers to make informed decisions.

“Knowing the level and type of pollution in the air we are breathing is critical,” she said, “Because the truth is we all breathe the same air, and we're all going to have to work together to improve it.”

KATHMANDU, June 13: Clean Energy Nepal in collaboration with the US Embassy in Nepal held a workshop entitled 'Open data for... Read More...

KATHMANDU, Nov 14: A team from Ministry of Health on Monday raided 34 clinics and pharmacies in Kathmandu and Lalitpur. Read More...