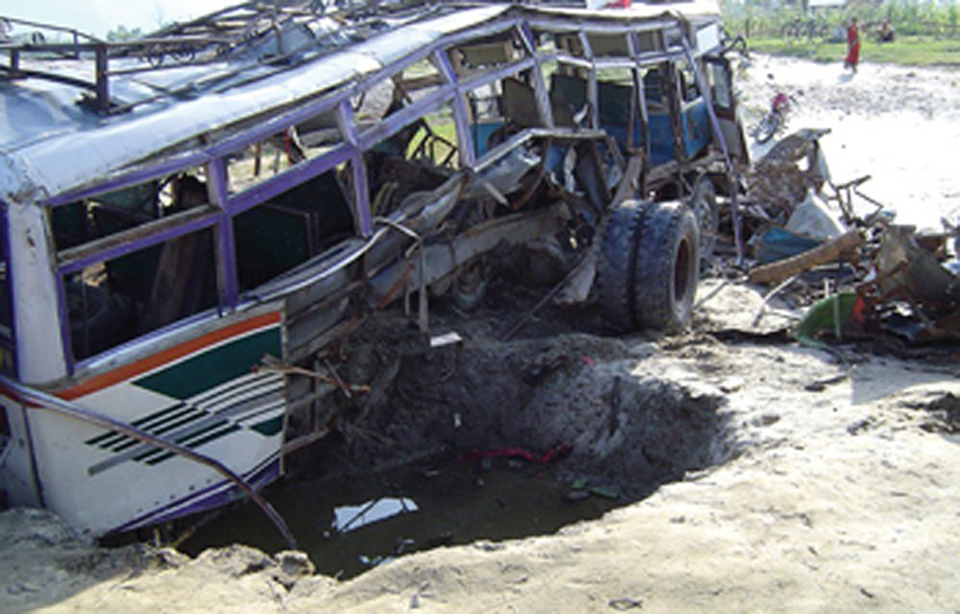 CHITWAN, June 6: Although 14 years have passed since Maoist cadres bombed a public passenger bus at Badarmude of Madi in Chitwan district, the families of the victims are still waiting for justice.

In one of the most gruesome acts of terrorism perpetrated by the then Maoist insurgents, a landmine targeting a bus (Na 1 Kha 3245) full of passengers at local Badarmude in the then Kalyanpur Village Development Committee of Madi Valley, Chitwan on June 6, 2005 killed 38 people including three security personnel on the spot, while 72 others were injured . Four of the injured also died later, taking the death toll to 42. Among others injured, 10 are still under regular medication.

Immediately after the incident, then CPN-M chairman Pushpa Kamal Dahal admitted in a press release that the terrorist act was a blunder and said it would be investigated to make the full facts public. Eight years later, he reached Madi himself during a local festival and claimed that a Rs 6 million package was going to be distributed to the victims of the incident.

In addition, Dahal reached an agreement with some of the victims according to which their families would be provided employment, a subsistence allowance and treatment for the injured. During his election campaign in Chitwan last year, he promised to erect a monument to the victims.

However, such agreements have been limited to paper only. The victims claim that all of Dahal's promises and agreements were fake. Vice-chair of the victims committee Krishna Prasad Adhikari accused him of just making hollow promises repeatedly. “Dahal has been in government several times, but he has not yet made any effort to deliver justice to the victims' families,” he said.

Adhikari further claimed that neither the seven-point agreement reached between Dahal and the victims in 2008 nor a three-point agreement signed 10 years later have been implemented . “Dahal does not seem to have any feelings about this incident,” he said. “He must have taken it as something puny in his scheme of things.”

“Out of the 60 victims that have applied for compensation amounts, we have selected 25 for now,” he said. “All the 25 selected will receive a compensation of Rs 100,000 each.” The remaining victims would receive their compensation next fiscal year.

CHITWAN, Oct 7: An elderly man died after being attacked by a rhino at Ratna Nagar municipality in Chitwan on... Read More...

KATHMANDU, May 22: The United Nations Human Rights Committee has said the government of Nepal must adapt its definition of rape... Read More...