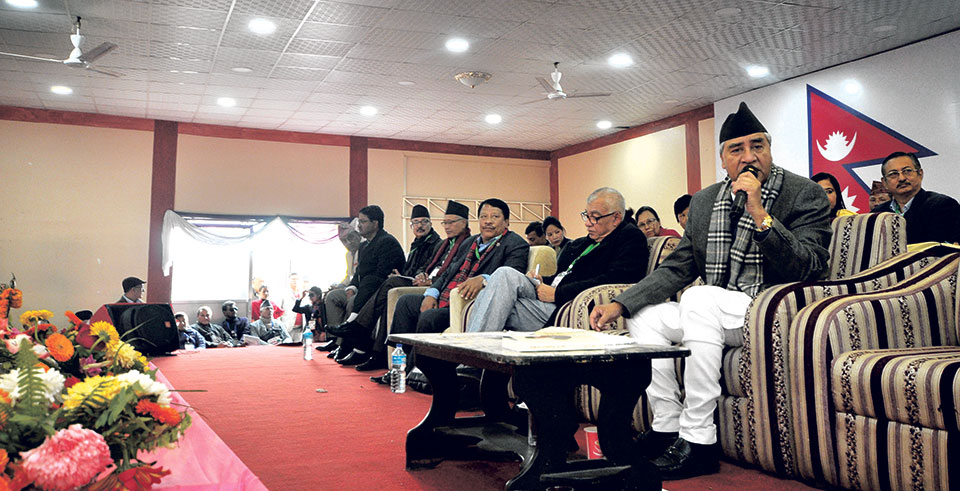 KATHMANDU, Dec 22: The main opposition party, Nepali Congress (NC),  finally settled a dispute over the number of office bearers on Friday after both the establishment and rival factions settled for a total of 14, including eight joint general secretaries. Besides an agreement to have a 171-member Central Working Committee (CWC), the two sides agreed to elect all office bearers except the treasurer.

NC Vice President Bimalendra Nidhi briefed the press on the agreement reached between the two sides during the Central Working Committee meeting on Friday. The final draft of the agreement is scheduled to be presented before the Mahasamiti meeting on Sunday for deliberations, according to NC spokesperson Bishwa Prakash Sharma.

This new arrangement would mean significantly curtailing the powers of the elected president, as he/she would not have discretionary powers to nominate office bearers and secure a comfortable majority in the panel. Rival faction leaders maintain that the establishment faction had backtracked from its previous agreement to have only two joint general secretaries as this would weaken the president.

All eight joint secretaries will now be elected directly from the general convention, on the basis of eight various clusters as stipulated in the constitution. These clusters include women, Dalits, indigenous people, Khas Arya, Madhesi, Tharu, Muslims and backward regions.

The ongoing Mahasamiti meeting that began  a week ago is scheduled to conclude on Saturday, which also marks the birth anniversary of the party’s late leader Krishna Prasad Bhatttarai. Although the meeting was scheduled to conclude on Wednesday, failure on the part of the top leadership to present a draft of the party’s statute extended it for four days.

KATHMANDU, July 22: The ruling Nepali Congress (NC) has decided not to hold any official party meeting at the Prime... Read More...

KATHMANDU, Oct 11: A Central Working Committee (CWC) meeting of the Nepali Congress (NC) scheduled for Wednesday has been put off... Read More...

Govt, ASDP and NACCFL sign deal for capacity buildings of cooperatives in Karnali
33 minutes ago