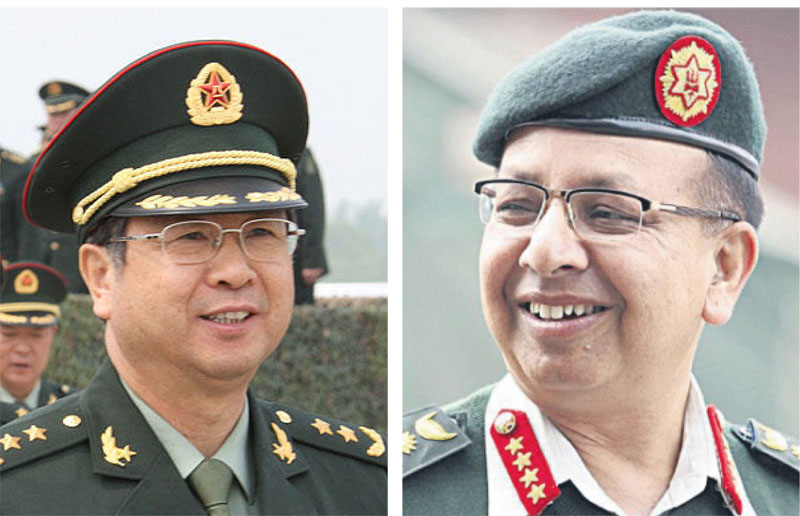 At a time when the government is having a difficult time countering growing foreign interference in its day to day functioning, one organ of the state has not only resisted foreign influence but has also found a way to use the two neighbors’ newfound interest in it to its advantage. Contrary to what many analysts believe, Nepal Army is not inching closer to India or China and solely stands for the country’s interests. (Some of its officers may be more concerned with money, as highlighted in the media recently, but when it comes to preserving the institution’s primary interests, Nepal Army is doing a rather exceptional job.)

Don’t believe me? Consider these examples:

In September 2013, the army headquarters received a surprising letter from the Ministry of Defense telling it to stop training foreign soldiers in its high altitude and mountain warfare school in Mustang, citing Chinese security concerns. It makes no sense to believe that the strange letter originated in Beijing. Needless to say, it was sent at the behest of someone in a mission in Kathmandu who, for whatever reasons, wanted to test the Chinese influence in the bureaucracy and our bureaucrats’ and leaders’ influence in the
military—talk about killing two birds with a single stone.

It was a rather cunning way to test whether or not our leaders had the subjective control of the military. As expected, the military headquarters decided not to heed the suggestion of the ministry and ignored it completely. Even today, it trains soldiers of friendly foreign countries in its high altitude and mountain warfare school.

Similarly, many believe that the Indian blockade following the promulgation of constitution last year was lifted because of military diplomacy. The chief of army staff general, Rajendra Chhetri, had gone on a visit to India and met his counterpart there at the start of February, 2016, and right away the unofficial blockade was unofficially lifted as well.

With the announcement that Nepal and China will conduct a joint military exercise soon, many are viewing it as Nepal Army moving closer to China or China countering India’s traditional influence in the organization. Some even say that the joint military exercise and the increasing quota to Nepali security personnel in Chinese defense institutes results from its security concerns in Tibet. But nothing could be farther from the truth.

The military knows that it makes no sense to antagonize India and that it has to operate within certain parameters, given our geostrategic location. And to think that China still views us as a vehicle to safeguard Tibet would be kidding ourselves. Today’s China is a confident power and it will do whatever needs to be done, if the situation arises, to protect its interests. Maybe it has other strategic designs on Nepal, such as using it against India in case of a naval warfare in the Indian Ocean or if things get out of hand between India, the US and China in the South China Sea, and nothing is wrong with China viewing us that way.

A superpower needs to have plans to safeguard its interests and that’s what strategists are paid to do. It’s up to us to come up with the ways to make ourselves strong enough, through whatever means necessary, so as not to allow ourselves to be used against any power, if we are to maintain the pseudo-neutrality of our foreign policy, or to openly side with one neighbor—against the other—if we are to follow a pragmatic foreign policy. Who we side with needs to be decided by the leaders and policy makers based on pros and cons of such an alliance and the military will train accordingly. Since as of today we are undecided on this, and both China and India are seen as friendly countries, there is no reason to be suspicious of Nepal conducting a joint military exercise with China.

Joint military exercises or trainings are integral part of military diplomacy these days.

Even China and India conduct joint military exercises. And the US and Chinese militaries engage in joint exercises as well. It helps with the development of interoperability with friendly armies, which is one of the key themes of the Defense Doctrine of Nepal Army released in 2014. Today’s militaries need to work together to combat terrorism and conduct humanitarian operations and so joint exercises help the militaries understand each other better so that these joint operations are smoother.

Therefore, it makes no sense to view our army’s joint excise with China as jeopardizing regional security or leading to China gaining control in Nepal or it trying to influence the roles and responsibilities of Nepal Army. If China were to provide us with latest
missiles and lethal hardware, then, of course, others would have reasons to raise an alarm. But neither are we buying weapons nor is China supplying us with any weapons that could even remotely upset the regional balance of power. No, we are not getting the DF series missiles from China, let’s be clear on that.

Rather late than never, Nepal Army for the past few years has focused extensively on military diplomacy. The frequency of joint exercises and trainings with India and the US has also increased—and it is a good thing. By conducting a non-threatening joint
exercise with China, perhaps, Nepal Army is sending a message to all that as of today it knows what is best for the institution and that no single power has the ability to influence it.

Let’s not forget: Joint exercises aside, recently the Nepal army concluded a major delaying action battle exercise to safeguard the nation in case of an attack by any foreign power, be it neighbors or others.

Australia will just have to accept ball-tampering taunts in England

MELBOURNE - Australia's cricketers will just have to bear English taunts over the ball-tampering affair on tour next month for... Read More...

Voter sentiment: We will vote for competent candidate, not just any politician

KHOTANG, April 22: Shivaraj Rai of Lamidada village is loud and clear which candidate would he vote in the upcoming local... Read More...

The iPhone 7 is just fine, even if it doesn’t wow

TIBURON, California, Sept 14: Apple’s new iPhone 7 and 7 Plus are clearly improvements on their predecessors -- even if the... Read More...

On lockdown
14 hours ago

Four-day walk from KTM to Sindhuli: Laborers have to travel long
19 hours ago

COVID-19 tests being conducted from 10 different places: MoHP
5 hours ago

Nationwide lockdown likely to be extended by another week, until midnight April 14
10 hours ago