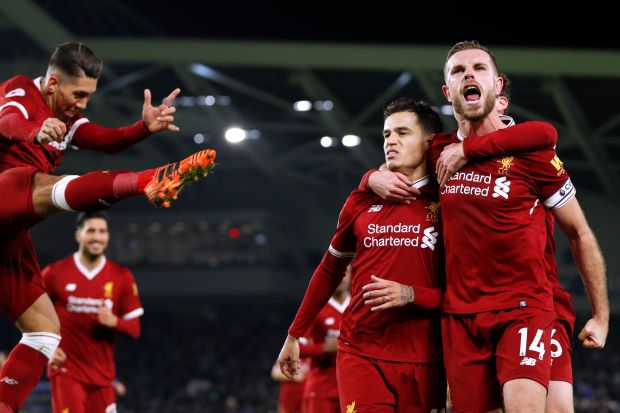 LONDON, Dec 3: Manchester United held on with 10 men after Paul Pogba’s late dismissal to beat Arsenal 3-1 in a pulsating game at the Emirates Stadium on a day when Liverpool and Chelsea also kept up the heat on Premier League leaders Manchester City.

With Pep Guardiola’s free-flowing side not in action until Sunday, second-placed United closed the gap at the top to five points with a thrilling display that belied manager Jose Mourinho’s reputation as overly defensive away from home.

While goals from Antonio Valencia and Jesse Lingard inside 11 minutes, and a further second-half strike from Lingard, showed United at their best, Pogba’s crude ‘studs-up’ lunge at Hector Bellerin revealed another side in the 75th minute.

The Frenchman deservedly received a straight red card and will miss three games, including next week’s derby against City.

Until Pogba’s dismissal, everything had looked perfect for United, for whom David De Gea was outstanding and was beaten only by Alexandre Lacazette just after the interval.

“What I saw today was the best goalkeeper in the world,” said Mourinho, who said he “did not know” what to make of Pogba’s dismissal and would leave it to the television pundits to decide.

The German made even more changes than his team scored goals, leaving out six of the side who beat Stoke City 3-0 in midweek.

Liverpool were not weakened and after stand-in centre half Emre Can put them ahead with a bullet header, Roberto Firmino hit a double, Philippe Coutinho scored from a free kick and Brighton’s Lewis Dunk headed into his own net. With the visitors three up, Glenn Murray’s 51st-minute penalty was not enough to spark Liverpool’s usual defensive jitters.

Earlier, Chelsea came from behind to sweep past Newcastle United 3-1 at Stamford Bridge.

After Dwight Gayle gave Newcastle the lead, Belgium’s Eden Hazard produced nine shots, six on target, and two goals in a display that, according to Newcastle manager Rafa Benitez, made the difference against a side who have now gone six games without a win.

Hazard also provided a potent reminder of what England can expect when they face Belgium in the World Cup in Russia next year.

At Vicarage Road, Spurs clung on for a 1-1 draw with their near neighbours after Davinson Sanchez was sent off for elbowing Brazilian Richarlison at the start of the second half. The goals came early with Christian Kabasele’s opener for Watford cancelled out by Son Heung-min. Sixth-placed Spurs are now four points behind Liverpool and 15 adrift of leaders City.

Sam Allardyce and Alan Pardew both looked to deliver the new manager bounce in their first match in charge for their clubs but only Everton collected three points in a routine 2-0 win over Huddersfield Town.

Gylfi Sigurdsson and Dominic Calvert-Lewin scored second-half goals to give Allardyce a winning start two days after he signed an 18-month contract at Everton. But the performance was short on quality and the 63-year-old will have work to do before next Sunday’s derby visit to free-scoring Liverpool.

Pardew’s first match in charge of West Bromwich Albion ended in a 0-0 home draw with Crystal Palace, who were replaced at the foot of the Premier League by Swansea City, 2-1 losers at Stoke.

The visitors went ahead through Wilfried Bony’s first goal for them in nearly two years before Xherdan Shaqiri and Mame Biram Diouf turned the game to increase the pressure on Swansea manager Paul Clement after his side’s 10th league defeat of the season.

Demarai Gray got on the end of Riyad Mahrez’s cross to give Leicester a 1-0 win over Burnley that continued the Foxes’ bright start under Claude Puel. Burnley’s bad day was made worse by an injury to Robbie Brady, who was taken off on a stretcher before the break.

Manchester City came out on top in an epic Champions League battle against Monaco as late goals by John Stones... Read More...