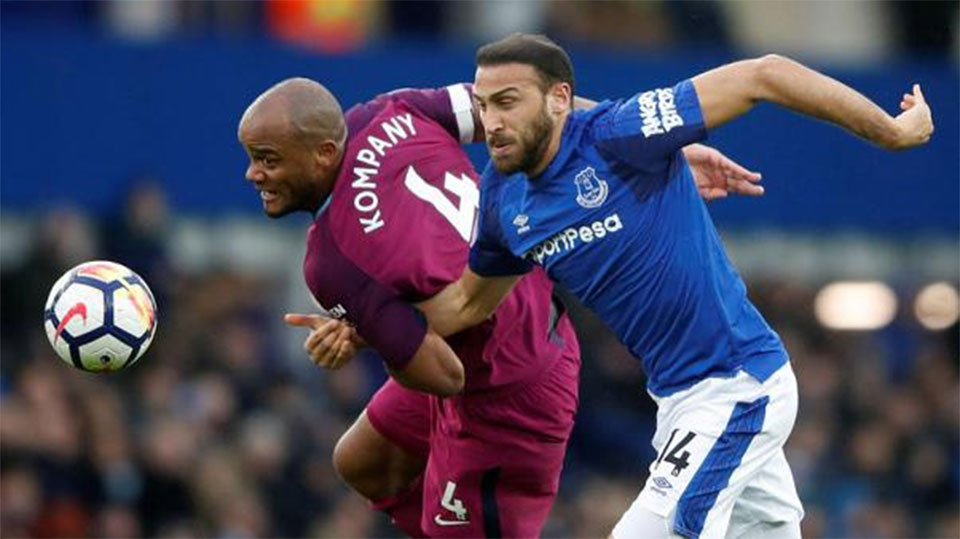 Deliciously for City fans, the three points could be secured next Saturday at home against Manchester United although with that game sandwiched between the two legs of the Champions League quarter-final against Liverpool, manager Pep Guardiola was keen to play down the chances of a title celebration.

City took just four minutes to get in front with a superb volley from Leroy Sane after a fine cross from David Silva,

The game was put beyond Everton within 37 minutes with a Gabriel Jesus header and a Raheem Sterling finish making it 3-0.

Guardiola’s side took their foot off the gas in the second half and Everton restored a little pride with a 63rd minute strike from Yannick Bolasie.

It has long been a matter of time before City formally clinch the title but next week’s opponents head into the derby in second place and with a win under their belt after beating Swansea City 2-0 at Old Trafford.

Romelu Lukaku reached 100 league goals by scoring in the first five minutes as United dominated a Swansea side who have been revitalised under manager Carlos Carvalhal.

Alexis Sanchez struck before the interval, the Chilean forward’s second goal for United, and the hosts comfortably saw out the victory at Old Trafford.

“We have 10 points more than last season but there is a club which is making it practically impossible to follow. In other leagues we would be fighting for the title,” said United manager Jose Mourinho.

Liverpool came from behind to win at Palace in manager Juergen Klopp’s 100th league game in England and move five points ahead of fourth-placed Tottenham Hotspur, who visit fifth-placed Chelsea on Sunday.

Mohamed Salah scored their late winner, his 37th of the season in all competitions, after the equaliser by Sadio Mane.

Palace’s Serbian penalty expert Luka Milivojevic had converted his seventh spot-kick out of eight this season to put the home side in front early on.

His old club were left in good heart ahead of an exciting week, with a Champions League quarter-final first leg at home to Manchester City on Wednesday and the Merseyside derby at Everton three days later.

“It is usual for us that we need to fight here, especially after a difficult start, but it makes it more special at the end,” Klopp said.

Palace, however, remained in trouble, only two points above the relegation zone.

“It is a bit of a groundhog day playing against these top teams,” their manager Roy Hodgson said after his side conceded a late winner again, just as they had to Manchester United and Tottenham in their previous two home games.

West Ham jumped above their London rivals with a comprehensive 3-0 home victory over a poor Southampton side, who were three goals down at halftime in manager Mark Hughes’s first league game in charge and stayed in the bottom three.

Marko Arnautovic, who fell out with Hughes after leaving Stoke City for West Ham in the close-season, scored two of the goals.

Manager David Moyes was delighted with his team and their fans after protests marred the last home game, a 3-0 defeat by Burnley.

“The supporters were great, they have been great here bar a few. The players gave them something to shout about today,” Moyes said.

Huddersfield Town remained in trouble, three points above relegation, after losing 1-0 at Newcastle United to a goal by Ayoze Perez.

Bottom club West Bromwich Albion, who have won only one league game out of 30 since beating Burnley in August, lost to the same opponents 2-1 at The Hawthorns.

Ashley Barnes, with a spectacular bicycle kick, and Chris Wood against his former club were the scorers before Salomon Rondon grabbed a late consolation for West Brom.

Brighton were beaten 2-0 by Leicester City in a dramatic finish after Glenn Murray had his penalty saved by Kasper Schmeichel and Leicester’s Wilfred Ndidi was sent off.

In the other mid-table game, Jermain Defoe’s equaliser in stoppage time earned Bournemouth a 2-2 draw at Watford.