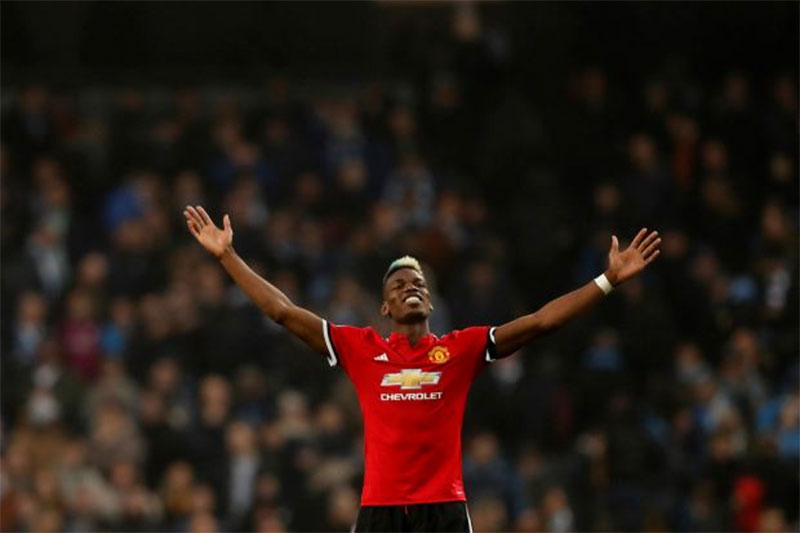 City, needing to win to wrap up the English top-flight title with more games to spare than any other side in history, seemed to be coasting to the landmark, leading their neighbours 2-0 at the break with goals from Vincent Kompany and Ilkay Gundogan.

Yet just when it seemed United were being outplayed to the point of embarrassment, they launched an astonishing comeback soon after the break with Pogba, previously anonymous despite a new flashy blue hair-do, striking twice in two minutes.

Then, with City losing their composure, Chris Smalling was left free to volley home the winner from Alexis Sanchez’s freekick in the 69th minute to seal a memorable win.

Now instead of a morale-boosting celebration, Pep Guardiola’s side have been forced to wait to clinch their third title in seven seasons and cannot be guaranteed the title even if they win at Tottenham Hotspur next Saturday.

If City beat the in-form Spurs at Wembley, they will still not be able to celebrate the title unless United fail to beat bottom club West Bromwich Albion the following day.

City, who suffered their first home league defeat for 16 months, were left to look back on the most deflating of evenings.

They missed a host of first-half chances, had an obvious penalty turned down, were denied by the brilliance of United keeper David de Gea and finally saw the profligate Raheem Sterling hit the post from point-blank range.

United manager Jose Mourinho, though, was all smiles, especially as his match winner turned out to be the misfiring Pogba, who was reported by Guardiola to have originally been offered for sale to City before he was signed by United.

“If the accusation from his agent is that he wants to go to other clubs, his price has gone up,” smiled Mourinho.

City’s defeat completed their wretched week after the 3-0 mauling by Liverpool at Anfield in the first leg of the Champions League quarter-final on Wednesday and they now face a European exit in the return on Tuesday night.

Earlier, Everton and Liverpool had served up a surprisingly bloodless affair in the 231st Merseyside derby, while Spurs prevailed with a double from the in-form Christian Eriksen at Stoke.

The Goodison Park match, which did not feature a single booking — a remarkable occurrence amid one of England’s fiercest derbies — saw Liverpool soak up a late spell of Everton pressure to stretch their record unbeaten run in Merseyside derbies to 17 games.

Yet without the league’s top scorer Mohamed Salah and Roberto Firmino in a very different starting XI to the one that outplayed Manchester City, Liverpool looked to have the Champions League return on their minds.

The draw, though, allowed Spurs to move alongside them with a sixth straight league win as they defeated Stoke, whose relegation fears in 19th place were only heightened.

Harry Kane made his return for Spurs after nearly a month out with injury but it was Eriksen who orchestrated the victory with two goals in 11 second-half minutes, taking his goal tally to five in three games in all competitions.

At the other end of the table, West Brom’s plight only worsened as Swansea City came from behind to draw 1-1 and keep the seemingly-doomed Baggies 10 points from safety with just five games left.

PHOTOS: Fishing craze in Pokhara
9 hours ago
Registration of over 300 manpower companies likely to be scrapped
12 hours ago