They are well aware that it takes coordination and interest to initiate any group activity. One can see it in the coordinated efforts of the artist duo.

According to Pradhan, Plein Air Workshop is a concept to step out of the four walls of the artist’s studio and explore the open air for artistic expression. He shared: “We are using social media as our platform. We have our Facebook page with around 400 members. To select the location, we have a polling system and we organize our workshop at a place that gets the highest number of likes.” 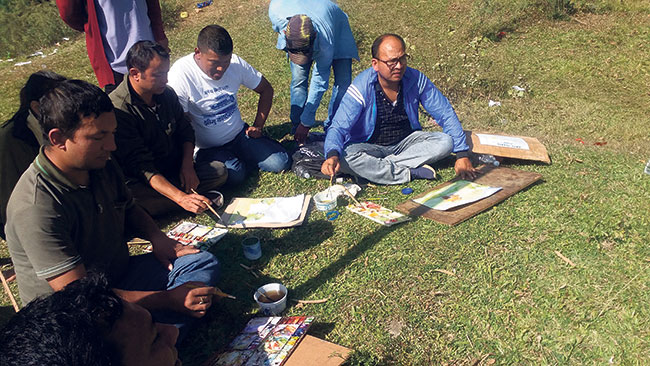 The workshop also serves as a place to follow up with old friends, apart from being a platform to learn painting techniques from each other in a light, fun-filled environment.

As Albert Einstein had once said: “Creativity is contagious, pass it on,” the workshop has become kind of contagious.  The first edition of ‘Saturday Plein Air Workshop’ began on September 1 at Hanumandhoka in Kathmandu with only three artists -- Pradhan, Shrestha and Dipendra Banepali. The number of participants is constantly growing in subsequent editions.

On Saturday, the group organized the eighth edition of the workshop at Khokana in Lalitpur with a total of 30 participants.

The group has held different editions of the workshop at Changunarayan, Bhaktapur, Patan, and Swayambhu, among other places of historic and cultural importance.

Bharat Giri, an independent archaeological researcher was invited to give brief information of the historicity of the town of Khokana. He explained about the etymology of the place’s name and underscored the need of promoting Nepali culture and history around the world.

He said: “It’s high time that we research about the scientific aspects of our culture and show it to the world. We need to come up with evidences that our cultures are not just mere superstitions but there is deep scientific meaning behind them.”

“It is true for every tangible and intangible cultural heritage in Nepal. It is important to promote our culture, which is still very much alive in comparison to different ancient cultures across the world,” he added.

After the introductory session, artists began to hunt for suitable location around the neighborhood. Some of them captured Rudrayani Temple and its surrounding in their canvases, whereas some walked to the Shikali Temple to capture the beautiful natural scene and the peaceful temple vicinity.

The artists used either water color or acrylic to capture the landscape of the historic Khokhana. About the importance of ‘Saturday Plein Air workshop,’ Banepali said: “The workshop gives me energy as I work in a group, which is different from working solo at my studio. I get the feel of the place while painting in open air. It’s a platform to explore oneself.”