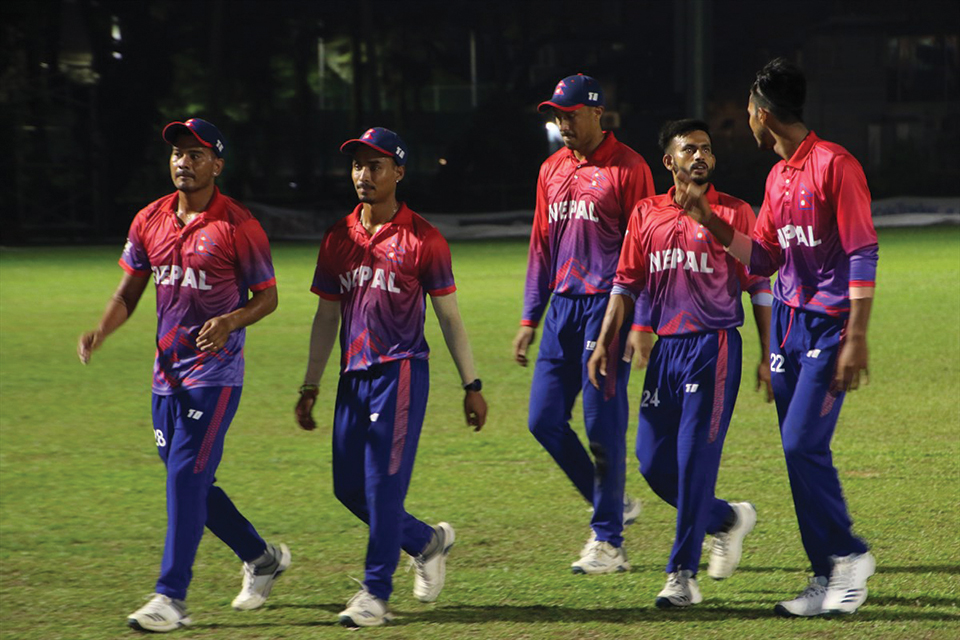 Members of Nepal national cricket team walk out off the pitch after losing to Zimbabwe in the Singapore Tri-Nation Series match at the Indian Association Ground in Singapore on Tuesday. Photo Courtesy: Raman Shiwakoti

KATHMANDU, Oct 2: Zimbabwe skipper Sean Williams picked up player-of-the-match trophy in a commanding win of 40 runs against Nepal in a Tri-nation T20I Series league match played at the Indian Association Ground in Singapore on Tuesday. Zimbabwe responded strongly to win the match after its first-ever loss against Singapore on Sunday.

Williams registered three wickets in his four-over spell to limit Nepal for 120 runs in the 20 overs after helping Zimbabwe put up 160 in the first innings scoring 53 runs off 35 balls.

With the win, Zimbabwe has jumped at the top position of the group table with four points followed by Nepal and host team Singapore with two points each.

Nepal is second on the table, on better net run-rate than Singapore, after three matches including a win against the home team and twin losses against Zimbabwe. Zimbabwe had defeated Nepal by four wickets in the opening match of the league.

Binod Bhandari top-scored for Nepal with 33 runs off 35 deliveries including four boundaries. Aarif Sheikh, who was demoted to number four, contributed 25 runs off 20 deliveries which included three boundaries and a six.

Karan KC tried his luck smashing a four and a six off 10 deliveries scoring 18 runs but Nepal lost him and Bhandari in a difference of six deliveries to end Nepal’s challenge.

Zimbabwe was in early trouble losing three wickets for 38 runs in the fifth over. Lamichhane has dismissed Brian Chari for a duck and clean-bowled Peter Moor who had scored 21 runs off 12 deliveries which included a four and two sixes. Similarly, Kami had clean-bowled Regis Chakabva for six runs off 11 deliveries.

Kami came back to break the partnership in last delivery of his spell dismissing Mutomodzi whereas Nepal skipper Khadka introduced himself late in the innings to scalp his counterpart.

Ryan Burl remained unbeaten on 28 runs off 21 deliveries to help Zimbabwe reach 160 in the 20th over. Burl boosted the total in a partnership of 44 runs with Richmond Mutumbani who scored 17 runs off 16 deliveries before falling to Avinash Bohora.

Nepal will face Singapore on Wednesday whereas Zimbabwe will take on the home team on Thursday which is the final fixture of the tri-series. The team with the most points at the end of the series will be declared champion. 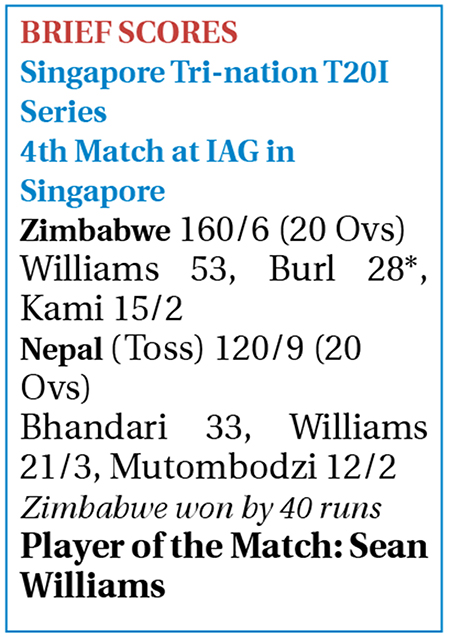