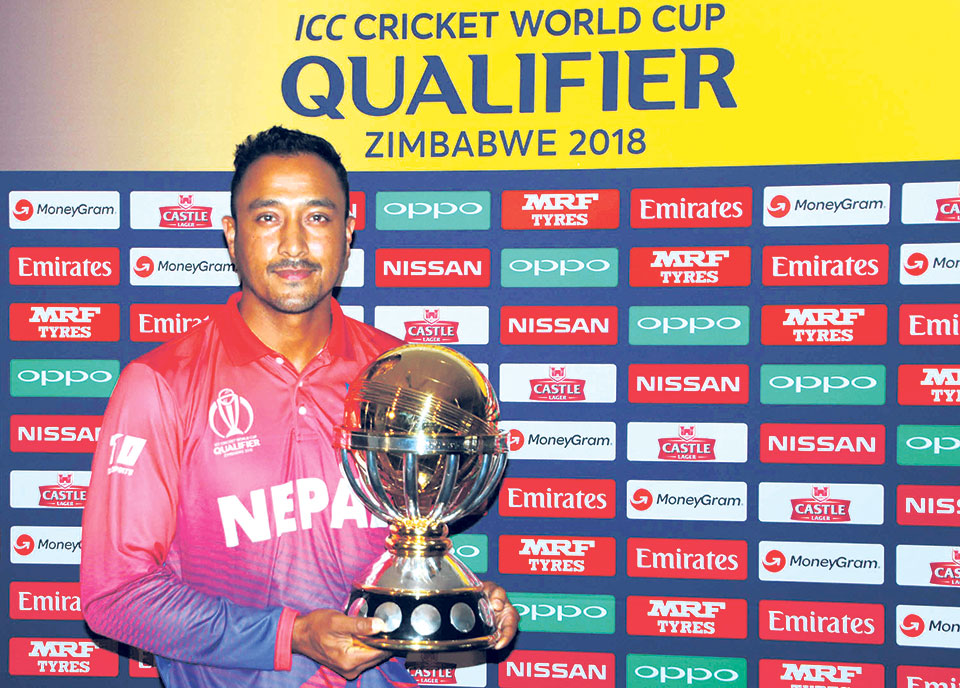 KATHMANDU, March 4: As Nepal is going to play the first ICC Cricket World Cup Qualifier 2018 match against Zimbabwe on Sunday, the momentum is with Nepal inspired by success stories of teenage sensation Sandeep Lamichhane and some other players’ outstanding performance in recent matches.

Nepal is drawn in the Group B of ICC Qualifiers along with host team Zimbabwe, test nation Afghanistan, fellow associates Hong Kong and Scotland.

The comparisons are already started to be drawn between the rapid rise of Afghanistan as cricketing nation and Nepal being on the same path of late. Just like Afghan cricketers had a turbulent political scenario back home, Nepali cricket went through never ending chaos in administrative part resulting in the suspension of Cricket Association of Nepal, the cricket government body.

The rise of Sandeep Lamichhane is often compared with the rise of Rashid Khan at the world stage, following the path of Afghani leg-break bowler, set to participate in new seasons of IPL and CPL. “Nepal have been one of the stories of world cricket in recent times, the new Afghanistan, so to say, with good performances on the field and an atmosphere of utter fanaticism off it”, International Cricket Council (ICC), the apex body of international cricket, states in its report.

STAKES
Ten teams are battling for two spots at the ICC Cricket World Cup in 2019 hosted by England and Wales. The top three from each group goes through to a Super Six stage. There the teams play three games each against the sides of opposite group. All points won in the groups will be carried over to the Super Six stage apart from those gained against the bottom two from each group. The top two teams from the Super Six final standings will play a final, and both teams will qualify for the World Cup.
The Netherlands, who won the ICC World Cricket League Championship (WCLC), and the top three Associate Members with most points will earn ODI status until 2022.

CONDITIONS
Rain has been hovering around in Zimbabwe, with games at Harare especially affected during the warm-up matches. Two games were washed out without a ball bowled, while one had to be abandoned in the midway and three matches were decided by the DLS method. With no reserve day in place, unlike Division Two, teams will be hoping to get minimum overs to complete all important matches.
The surfaces at Harare and Bulawayo have been on the slower side in recent years. Spin bowling will be key as proven by the success of Nikita Miller (WI) and Imran Haider (UAE), during the warm-up games. At the same time, the dampness caused due to overcast conditions and rain should help pacers like Tendai Chatara, Kyle Jarvis, Lalit Bhandari and Sompal Kami from bothteams.

FORM
Pace bowlers Lalit Bhandari and Karan KC shared seven wickets between them to shoot UAE out for 171. Nepal got to the target for the loss of five wickets with four balls left in their chase. Youngsters Dipendra Singh Airee and Aarif Sheikh particularly impressed with the bat. It was a good win, one that should give Nepal a boost ahead of a tough tournament-opener against Zimbabwe, the home side and one of the favorites. Nepal’s second warm-up match in Kwekwe against Hong Kong was washed out.
The hosts won comfortably by five wickets (including two retired-out batsmen) against Papua New Guinea to brush off their disappointing series against Afghanistan in February losing 4-1. Brendan Taylor, Sikandar Raza and Craig Ervine got runs, while Tendai Chatara and skipper Graeme Cremer were among the wickets. Zimbabwe’s second warm-up game against Ireland in Bulawayo was also washed out.

PROSPECT
Test nation Zimbabwe starts as huge favorites in their own home ground. “We really want to have a decent crack at these qualifiers. We know what’s at stake so we’re raring to go. There’s a special buzz in the change room playing at home, really looking forward to it,” said Graeme Cremer in an interview to ICC.
The presence of experienced heads like Hamilton Masakadza, Brendan Taylor and Craig Ervine with bat will be aptly required to come good in pressure tournament. The flair of spin-bowling all-rounders Sikander Raza and Sean Williams is added bonus for the host team. The skipper Cremer added, ‘There is definitely pressure especially because we’re playing at home. That’s extra pressure on us and we’ll embrace that.”
Nepal’s wobbles starts from the unpredictable batting which was addressed in last two games against the UAE. However, Zimbabwe’s all round attack with pace and spin is going to test Nepali batsmen further. “It’s about the brand of cricket we want to play instead of bothering about the others.
Play to our strengths, and if we play to our strengths we will definitely be able to pull off a few surprises,” Nepali skipper Paras Khadka told ICC. So far, Nepal’s bowlers are taken as real strength of the team. They, however, are going to face the real test when they play against prolific batsmen of Zimbabwe. “We are very, very keen. Everyone is looking forward. It’s just now about going out there and delivering and expressing ourselves. We’re here to express ourselves,” Khadka explained.