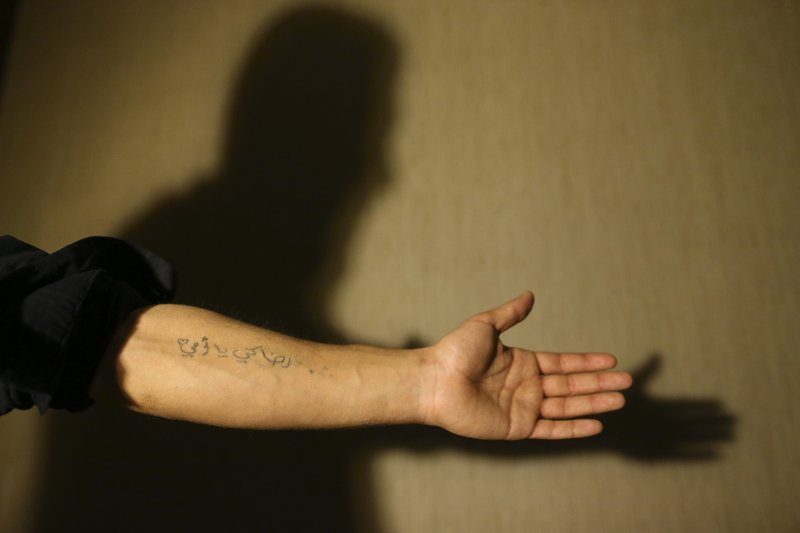 GAZIANTEP, Turkey (AP) — He was barely 20 when Islamic State group militants stormed his home city of Deir el-Zour in oil-rich eastern Syria. Mohammed had already been fighting government forces the past two years, so it was an easy decision for him: join the militants to keep up the battle against President Bashar Assad's rule.

Though he insists he was never a full-on member, Mohammed set about gaining the militants' trust. He memorized more of the Quran and learned by heart Shariah laws governing jihad, or holy war. He perfected the "IS look," letting his beard go bushy, wearing pants that stop above the ankle, and removing embroidery from his baggy shirt to show more austerity. He even carried a book of prayers in his pocket.

He did whatever was necessary to keep fighting for Deir el-Zour. But when the militants ordered him last summer to fight elsewhere, he broke ranks, escaping to Turkey.

Mohammed's journey tells a story from a generation of Syrians who came of age in the midst of war. Teenagers when the civil war erupted in 2011, some had to choose who and what to fight for. At first, the Islamic State group was just another armed group fighting a common enemy.

For Mohammed, his cause was his home.

"We the people of Deir el-Zour, unlike the other people of Syria ... have an instinctual love for the place we were born in," Mohammed boasted, explaining why he didn't leave when IS took over and showing the local pride that is deepening as Syria's divisions grow. "Why should I go and leave it to outsiders?"

He spoke to The Associated Press on condition he be identified only by his first name, fearing reprisals from Turkey or the Islamic State group.

Deir el-Zour province is the Islamic State group's "last fortress," said Omar Abu Layla, a local activist now in Germany. Some 2,500 IS fighters are estimated to be in the provincial capital alone. Hundreds more, many of them fleeing losses in Iraq, have flowed into rural parts of the province in recent months, digging in as the U.S.-backed forces concentrate on their assault on the group's de facto capital, Raqqa, in northern Syria.

Stretching along the Euphrates River through Syria's eastern desert to the border with Iraq, Deir el-Zour is richer and more important strategically than Raqqa, because it is the center of Syria's oil industry and because of its links to Iraq. Heavily reliant on tribal politics, its population is closely connected to that of Iraq's Sunni Anbar province — Deiris, as they're called, joke they are the Iraqis of Syria or the Syrians of Iraq.

Small in stature, Mohammed was a tough young man. A child of a poor neighborhood in the city of Deir el-Zour, the provincial capital, he made himself into a skillful striker on the soccer pitch and a determined fighter on the battlefield. In the interview, he often expressed his devotion for two things. One was his mother. "All for you, mother," reads a tattoo he got inked on his forearm after reaching Turkey. The other was his gun. "During five years (of fighting), the rifle became part of my body," he said.

He seemed intent on showing he never sympathized with IS. He admitted taking the oath of allegiance to the group but insisted it was not valid because of a technicality: he didn't seal it with a handshake with the emir of his battalion as required.

He laughed about smoking in secret in defiance of IS rules and talked of the girl he loves back home. As an example of how he didn't accept the militants' doctrine, he noted he always kept a single bullet in his pocket on the battlefield to kill himself to avoid capture. IS allows "martyrdom" by suicide bombers but otherwise considers taking one's own life a sin.

Still, it was hard to hide his time immersed in militant ideology. His speech was peppered with jihadi jargon. He was proud of acing the Islamic State group's Shariah exams. He was comfortable with hard-line versions of Islam. Before IS came, he served as a guard at a Shariah court set up by a rebel faction.

"I won't hide it," he said of IS, "they are fierce fighters who go in without fear, with determination and a strong heart. They are going for death."

While Deir el-Zour is now seen as a stronghold of the militants, it was originally a rebel heartland.

Unlike Raqqa, it erupted with protests early in the 2011 uprising against Assad's rule, bitter over years of neglect by Damascus.

Mohammed's neighborhood of Jbeileh, one of Deir el-Zour's poorest, became a fierce front line between rebels and Assad's forces. Then 17, Mohammed was drawn naturally to the rebels. His older brother fought for a Free Syrian Army faction and was seriously wounded three times — the third time crippling him. Two cousins died in fighting. His sister-in-law was killed in a government airstrike as she cradled her baby daughter. Another brother is in government custody, and a sister is on the run.

Rebels seized much of the province, though the government kept hold of part of the city and the strategically vital airport. Then the Islamic State group swept in and overran rebel areas in the summer of 2014, flush with resources after taking Mosul in Iraq.

"It was either let Daesh enter or the regime enter. Both were our enemies," Mohammed said, using the Arabic name for IS.

After gaining control, the group massacred members of a tribe that resisted its rule, sending a message to others. Deiri tribes split, some backing IS, others the opposition or government. Many rebels and anti-government activists fled.

Nearly 1,000 people, mostly former rebel fighters, packed into classes from dawn to midnight on Islamic law, the Quran and rules of jihad. The militants punished anyone who showed disobedience. Sometimes it was lashes; sometimes they would make the offender wear a baby bottle around his neck as a mark of shame.

When a call came for volunteers for a planned battle in the city, Mohammed saw his chance and raised his hand. He was accepted after passing a religion test. Mohammed said his Tunisian examiner was so impressed by his knowledge that he praised him as one of the "cubs of the Caliphate."

He was deployed in the fighting in Deir el-Zour as the militants advanced against government forces in late 2015 and early 2016. In one battle, he recalled, he and other fighters provided cover fire for a suicide bomber who hit the military's positions.

But he rankled at the group's hierarchy. Foreign jihadis who made up the elite raiding forces didn't mix with local fighters and didn't trust them. "We don't talk or sit together," he said. "They come to see us with their weapons cocked."

Mohammed's impetuousness soon got him into trouble. One evening, he threw a firecracker into a campfire as a joke, startling his IS commanders, he said.

He was detained and his gun taken away. He pleaded to be let go to join a planned offensive in a Deir el-Zour neighborhood.

Instead, IS commanders ordered him to Hassaka province, further north, to fight Kurds. He balked, and they accused him of undermining morale. Blindfolded, he was interrogated by a Saudi sheikh, who tauntingly asked him if he was afraid of the Kurdish forces' women fighters, as another militant hit him on the feet with a hose.

"He told me jihad is not about choice," Mohammed recalled.

Eventually, the sheikh ordered Mohammed to Manbij, near the Turkish border, where IS fighters were under assault by Kurdish forces.

As soon as he reached Manbij, Mohammed paid a smuggler to get him to Turkey.

Speaking to the AP in the Turkish city of Gaziantep, Mohammed struggled to explain his relationship with IS. He showed little concern over its atrocities. He shrugged off the massacre of Deiri tribesmen, saying he was from the city and had nothing to do with rural, tribal matters. What disillusioned him was the militants' abuse of power like harassment of women and discrimination against local fighters.

"We are simple people, and they talked to us using religion," he said, explaining why people worked with them. "They are Islam ... But they don't know how to implement it. They take what they want from Islam."

Alone and cash-strapped in Gaziantep for months now, his priority is finding a way back. He wants to fight to free Deir el-Zour of IS, and then also to protect it from what he sees as the next threat: the Kurds, who dominate the U.S.-backed forces fighting the Islamic State group in Syria's east. Mohammed, like many other Arab Syrians, fear the Kurds will hand over the liberated territory to the Syrian government.

He hoped to join Turkish-backed rebels if they took part in the campaign against Raqqa. But that scenario fell apart, and Mohammed slipped into despair.

In his last message, he refused to answer further questions, adding only: "What matters is I have to protect my dignity."

HONOLULU, July 11: An active duty soldier based in Hawaii pledged his allegiance to the Islamic State group, helped purchase a... Read More...

KABUL, Afghanistan, April 14: The attack on a tunnel complex in remote eastern Afghanistan with the largest non-nuclear weapon ever used... Read More...