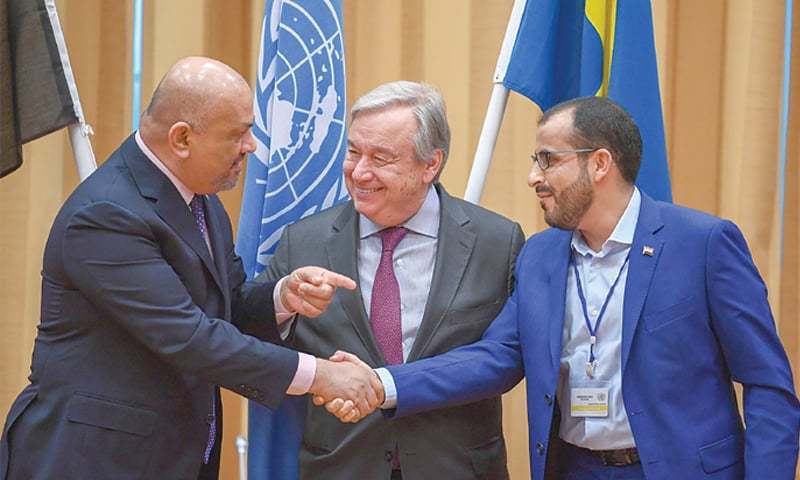 UNITED NATIONS, Feb 18: Yemeni government and Houthi representatives have reached an agreement on the first phase of their redeployment of forces under a U.N.-sponsored deal for the warring armies to leave the Yemeni port city of Hodeidah, the United Nations said on Sunday.

“The parties reached an agreement on Phase 1 of the mutual redeployment of forces,” a statement by the U.N. spokesman’s office said without giving details of exactly what the Iranian-aligned Houthis and the Saudi-backed government agreed.

The United Nations is trying to implement a truce and troop-withdrawal accord in Hodeidah, the main entry point for most of Yemen’s imports, as part of efforts to end a war that has killed tens of thousands and left millions on the brink of starvation.

Under Phase 1, the Houthis are to withdraw from the ports of Hodeidah, Saleef and Ras Isa to be met by a retreat of coalition forces from the eastern outskirts of Hodeidah city, where battles raged before a ceasefire went into effect on Dec. 18.

The Hodeidah truce has largely been respected but skirmishes continue between the Houthi movement and their foes in a Saudi-led coalition fighting to restore the internationally recognised government.

The U.N. statement said the two sides had also agreed “in principle” on Phase 2, entailing the full redeployment of the parties’ forces in the whole province of Hodeidah, according to the U.N. plan.

Allegiances among Yemen’s many factions have shifted several times during the conflict that pits the Houthis against the internationally recognised government of Abd-Rabbu Mansour Hadi, which was ousted from the capital Sanaa in 2014.

The Houthis control most urban centres in the poor Arabian Peninsula country. Hadi’s government is based in the southern port of Aden and controls some western coastal towns.

Disagreements over control of Hodeidah, the main entry point for the bulk of commercial imports and vital aid supplies to Yemen, have delayed the opening of humanitarian corridors needed to reach millions of Yemenis facing starvation.

Saudi Arabia and the United Arab Emirates are leading the Sunni Muslim Arab coalition that intervened in Yemen’s war in 2015 to try to restore Hadi’s government.