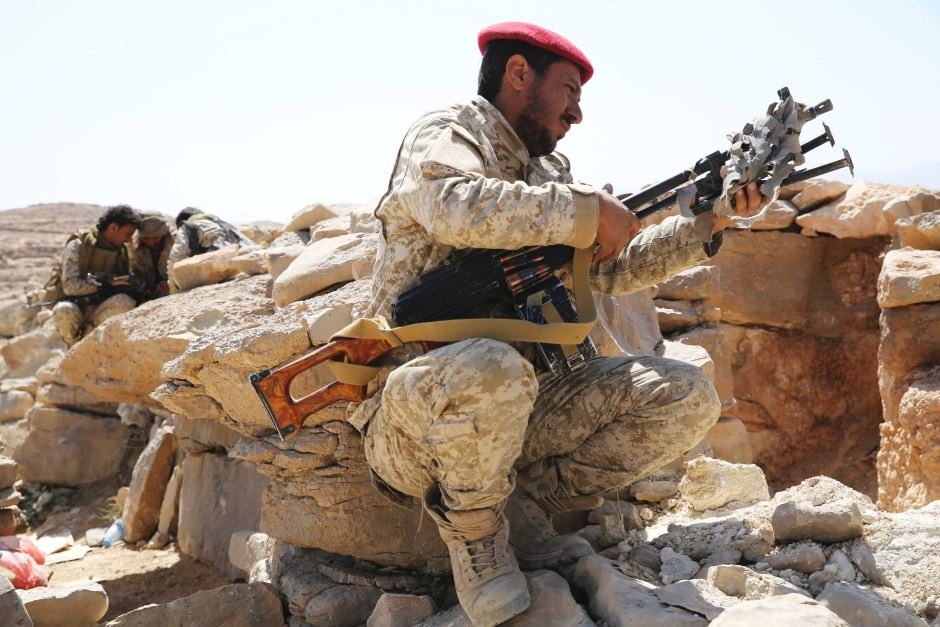 A Yemeni soldier allied to the country's internationally-recognised government unslings his machine gun on the outskirts of Sanaa, Yemen. AP: Jon Gambrell

It's hard to imagine the humanitarian catastrophe in Yemen could get any worse than it already is.

But an attack by Saudi-led forces on rebel Houthi forces in Yemen's major port city Hodeidah — also known as Al Hudaydah, south-west of the capital Sanaa, could see the death toll from the country's civil war skyrocket.

Already at least 10,000 Yemenis have been killed since the war broke out in the impoverished nation more than three years ago.

The United Nations estimates 8.4 million people remain on the brink of famine, in what it has labelled the world's worst humanitarian crisis.

In the past 24 hours a coalition of Arab and Yemeni government forces have massed on the southern outskirts of Hodeidah, before warplanes and warships began artillery strikes against key Houthi positions, including the city's airport.

Coalition forces have captured a town south of Hodeidah, as fighting continues for a second day.

A Saudi military spokesman says the forces are drawing closer to the port city in their campaign to drive out the Houthi rebels.

A handful of fighters on both sides have reportedly been killed.

Attack on Hodeidah could change the course of the war

It's the first time the Saudi-led coalition forces —which have United States backing — have tried to capture the strategic city.

But aid organisations warn the attack could have devastating consequences for the civilian population.

Hodeidah is the main entry point for vital supplies of food and medical aid to millions of Yemenis, not just in the capital but throughout the country.

Yemen's population is up to 80 per cent dependent on imports for its basic needs, and the vast majority of its food comes through the lifeline of Hodeidah port, without which huge swathes of the population would struggle to survive.

Already around 22 million people in Yemen — about three quarters of the population — are dependent on food aid.

Almost 400,000 children under the age of five are severely or acutely malnourished.

Many have starved to death.

Most of the country's 27.5 million people live within 100 miles of the western coast, with more than 3 million displaced by the war.

The United Nations estimates that around 600,000 people live in the port area, and in a worst-case scenario the fighting could result in the deaths of up to 250,000 people.

The civil war in Yemen has its roots in the Arab Spring, which in 2011 saw the demise of long-term dictator Ali Abdullah Saleh, and a new Sunni government led by Abdrabbuh Mansour Hadi formed.

But Shiite Houthi forces, backed by Iran, seized control of the capital Sanaa and Hodeidah in 2015 and forced Mr Hadi into exile.

The rise of the Iranian-backed group drew neighbouring Saudi Arabia — Iran's arch enemy — and the US into the conflict.

The Saudi-led coalition has fought for three years to oust the rebels and reinstate Yemen's Sunni government.

Hodeidah shaping up as biggest battle yet

Coalition forces moving into Hodeidah hope to box the Houthis in, cut their supply lines, and eventually retake the capital.

Rebel forces have relied on the port for weapons, allegedly supplied by Iran.

Whichever side wins, poor and desperate civilians will inevitably be caught in the crossfire.

Those who aren't killed outright would face even more desperate shortages of food and medical supplies.

Amnesty International said all sides in the conflict must take precautions to ensure the civilian population is protected and aid supplies are not impeded.

The renewed fighting has come after the United Arab Emirates — which supports the US-backed Saudi coalition — set a deadline of Tuesday this week for the Houthi rebels to withdraw from Hodeidah.

The UAE said plans are in place to keep the port operational, and has urged the international community to pressure the Houthis to evacuate and leave the port intact.

Houthi leaders deny they are Iranian pawns and say they are fighting to defend Yemen from corruption and foreign invaders.

Adding to Yemen's dire situation is the rise of Al Qaeda and jihadist groups affiliated with Islamic State, which are active in large pockets in the country's hinterland.

UN efforts to broker a peace deal have consistently failed.

JHAPA, June 11: While both the ruling Nepali Congress (NC) and the main opposition CPN-UML have been claiming that they would... Read More...

UNITED NATIONS (AP) — Military operations in Yemen are escalating and the humanitarian and economic situation is rapidly deteriorating in... Read More...