Women’s Participation in Elections in Nepal 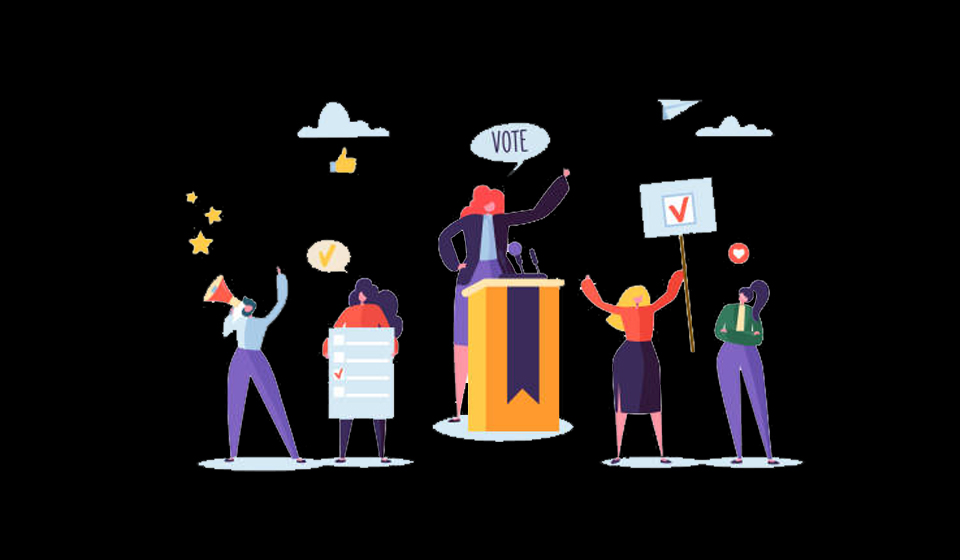 The author is a fresh graduate in Social Science from Kathmandu University.
news@myrepublica.com

The completion of local, provincial, and federal elections in 2017 was a defining moment in the history of Nepal. Due to constitutional obligations, the local election became a significant event in the participation of a greater number of women in elections. The increasing number of women, particularly from underprivileged populations, entering politics augurs well for women's political representation, but the path to substantive participation in leadership and decision-making roles for women is riddled with numerous obstacles.

Women made up 14,352 (40.96 percent) of the 35,041 elected legislators in the election of 2017 (Election Commission 2017). These achievements certainly didn't come easily; they are the result of a long history of political struggle and participation by women's/human rights activists to ensure that women and marginalized groups are represented in Nepal's political structure. The 2017 municipal elections in Nepal were notable in terms of increasing female political representation. The Election Commission, for example, mandated at least 40.4 percent of total nominees to be female, with a law forcing each political party's chief and deputy chief nominations for local units to be gender-balanced.

This is partly due to overall patriarchal socialization that manifested itself in the process of selecting and nominating candidates for the two key leadership roles. The conventional notion of gender roles and obligations continues to affect the public view of elected women legislators. Reserved quotas continue to appear to become the only avenue for Nepali women to receive proportional nominations and representation. Women serving as heads of state or wards are a positive step forward in our political paradigm, but it is fraught with misogynist criticism, lack of cooperation, and mistrust.

What, then, is the source of the accomplishment in the local election of 2017? To understand its genesis, we have to go back in time.

Women took a vital role in the protests and marches, and several women even became martyrs in People's Movement I (1990). During the first popular movement in Jana Andolan I, 1990, Sahana Pradhan led the United Left Front (Samyukta Bam Morcha). She actually represented women on the Democratic Movement's team of negotiators, pressuring the King to restore multi-party democracy. They persuaded the King to relinquish his rights and hand over control to the people. In addition, he constituted an interim administration in which Pradhan was appointed as a senior member of the seven-person cabinet.

Following the demands of the agitated political parties, King Gyanendra was forced to hand over state power to political parties and reestablish the dissolved House of Representatives. During this time, the rebellious political groups requested that Speaker Taranath Ranabhat conduct a parliamentary street meeting, but he sided with the King and refused to do so. The parliament meeting was called and chaired in the street by Deputy Speaker Chitra Lekha Yadav, a woman. She was instrumental in the re-establishment of the disbanded parliament (House of Representatives). She has also played a key role in raising women's issues, giving the Nepali women's movement a new dimension.

Following the dissolution of the Constituent Assembly in 2012, a new election was held in 2013, chaired by Supreme Court Chief Justice Khil Raj Regmi, to elect a new Constituent Assembly. In the 2013 CA election, fewer women were elected than in 2008. The number of women candidates in the major political parties decreased from 96 in 2008 to 77 in the 2013 CA election. However, because of the constitutional provisions of proportional representation in the electoral system, the percentage of women in the CA remained at 30% out of 601 members.

Women in the 2015 Constitution

The concepts of inclusive democracy were included in Nepal's 2015 Constitution. Women were represented by 33% in the Constituent Assembly and 40% in municipal governments. The Constitution also mandates at least one woman in each of the nation's two leadership positions (e.g. President or Vice-President, Speaker or Deputy Speaker, Chair or Vice-Chair of the National Assembly must all be women), as well as at least 33% female representation in the State structure and one representative position for women as the head and deputy head of local governments. This Constitution also ensures financial equality, as well as the preservation and promotion of variety, social and cultural unity, tolerance, and peace. Ending all forms of racial discrimination, including class, ethnic, regional, linguistic, religious, and gender prejudice will bring prosperity and social fairness. However, several ethnic groups and Madesh-Terai residents continue to argue that the constitution does not adequately address all of their problems and that it needs changes.

The indication of history began with acknowledging women’s important political participation in bringing revolutionary changes from the Panchayat era to the Federal Democratic Republic. Increased female representation in Nepali parliaments and municipal administration in recent times has been met with accusations of "tokenism." It is argued that women candidates were elected to parliament solely to meet the requirement for female representation. As previously stated, entrenched discrimination continues to cause many operational issues in the everyday execution of parliamentary tasks. The strain of living in a patriarchal environment still weighs heavily on Nepali women. Their ability to be a member of parliament based on quota system participation has been called into question far too often. Women's participation in decision-making and constitution-making processes is still limited. Though women have achieved higher positions (e.g., President of Nepal, former Chief Justice of the Supreme Court, and Speaker of Parliament) - achievements that were unimaginable two decades ago - the progress made so far is insufficient.

Misogyny and other types of discrimination against women leaders must end; instead, they must be given significant support both within the political party and in governance. Favoritism should be eliminated so that potential female leaders from grassroots level have equal access to opportunities. Women leaders are the future of today and tomorrow, thus society must shift its patriarchal mindset and be willing to accept women as leaders. Women have demonstrated their ability to handle crises and pandemics with ease, and their leadership serves as a strong deterrent to corruption.

KATHMANDU, April 30: The Election Commission (EC) is providing election symbols to the parties and individuals who have fielded their... Read More...

KATHMANDU, April 5: The leaders of various political parties got engaged in a heated argument in a meeting called by... Read More...