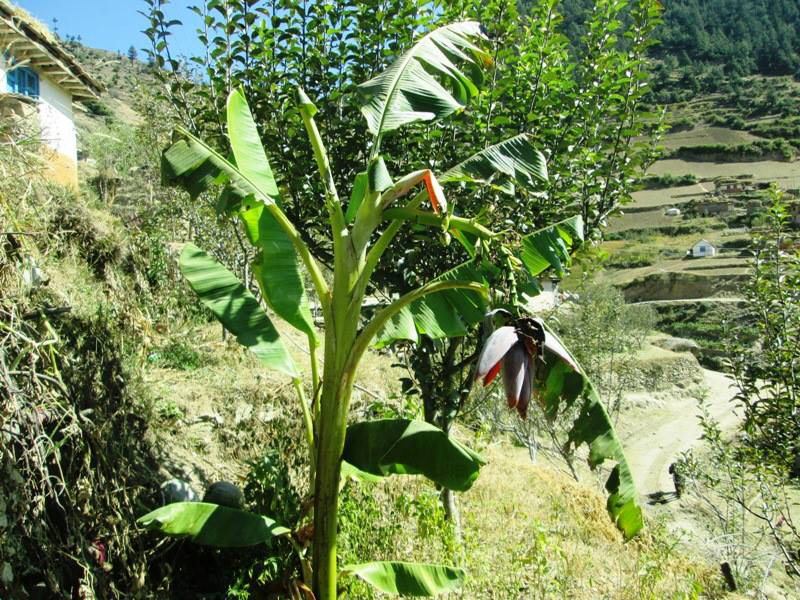 JUMLA, Oct 28: The residents of Jumla are startled.

For the first time ever, a banana plant has ripened and given fruit in the mountainous district which is predominantly cold. Bananas tend to grow in warmer places.

Dhanpati Nepali from Tila rural municipality-8 planted banana saplings for almost two years ago in his backyard. However, he had never thought the plant would have banana. "In six months, fruits started to appear. In a year, there are bananas."

"If the bananas grow this winter, I'll save the seeds for next year and start business," Nepali said.

Dhanapati's banana plant has become everyone's interest. He himself believes that it has been due to climate change. "We had heard that bananas doesn't grow in the cold. However, the climate is increasing and Jumla is becoming warmer. We've felt it," he said.

The bananas has drawn everyone's attention and farmers from Khalanga are arriving to believe the words they've heard. It is not just banana, Jumla's soil is also reaping lemon and pomegranate.

"We've seen the signs of climate change and increasing temperatures. Now, plants that grow in warmer places have started to grow in Jumla," another resident said.

Climate change is one of the burning issues that countries around the world, including Nepal, are currently facing. It is the... Read More...

SC justices refuse to conduct hearing on Wednesday as well, hearing conducted only by CJ Rana’s single bench
23 minutes ago